A 20 Question Anime Review for My Hero Academia.

And what’s it about? In a world where superheroes are almost commonplace, out protagonist Izuku Midoriya dreams of one day becoming a hero like his role model ‘All Might’ the greatest of all superheroes, except he was born without a ‘quirk’ the very thing that makes ordinary people attain powers.

Well that’s sad… Don’t worry, he meets All Might in person and because Midoriya is such a sweet soft boy with a heart of gold and the bravery of a Hinox, All Might takes him on as an apprentice with the intent to bequeath his powers to him when he becomes strong enough.

Wow, spoilers much? It’s fine. It reveals as much in the Wikipedia synopsis, it’s like three episodes of set up I saved you.

“Saved me”? Don’t tell me this is a negative review. No not at all, My Hero Academia is one of the rare shonen anime that doesn’t feel like it’s wasting your time.

Please stop calling me that. No. Also shonen is anime or manga targeted at teenage boys, and generally speaking of the action genre and usually with lots of episodes/volumes.

So it’s a good show? Yeah, it just takes a little bit of time getting to the meat of what the show’s going to become. It’s the kind of show where the first season feels lacking with hindsight and an excellent second season in the equation.

Well without spoiling too much, what is the “meat”? It’s a school anime! 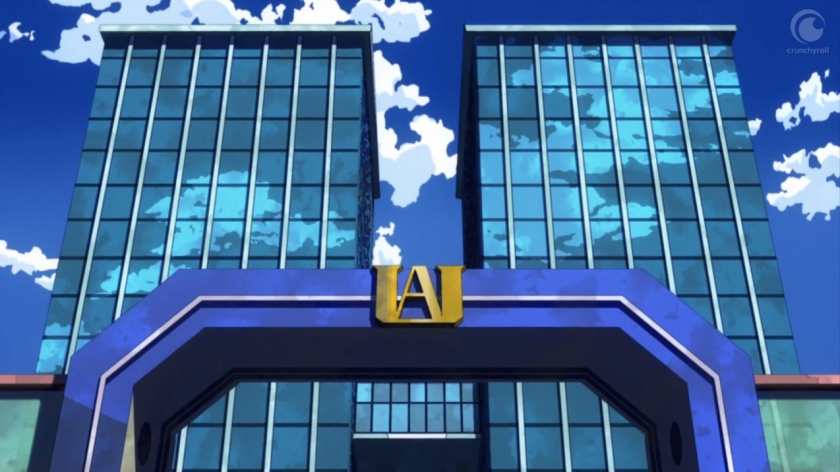 Right. And the other student heroes are so much more interesting than the protagonist (sorry Midoriya!)

I’m going to go out on a limb here and assume the one’s you think are more interesting than the protagonist are female? Sir! You wound me! Darest thou think I so shallow-

Who’s your best girl? Froppy! Rainy season hero has stolen my heart with her ridiculously long tongue and laid back persona!

Figured as much… No! You tricked me! There are plenty of interesting male characters too! Katsuki Bakugo treads this fine line between hero and villain with his explosive personality, so that’s interesting to watch and Tenya Ida is like if Sonic the Hedgehog wasn’t a douchebag and had appropriate sized calf muscles for the amount of running he does. And then Mr Hot and Cold himself Shoto Todoroki, you know every time he’s on screen I think it moves a little.

Was that a ‘Seinfeld’ reference? Of course not, I don’t even know what that is, I only know anime. Besides I’m not gay, not that there’s anything wrong with that.

Uh-huh, you know, I think I actually believe that you’re not just in it for the ‘sweet waifus’ this time. I’m proud of you. But there are sweet waifus and I will appreciate them thusly. Ochako makes me feel weightless as I look upon her beautiful face. Momo can create a lot more than just inanimate objects seeing her in that superhero costume of hers if you know what I mean! Oh and Toru Hagakure, I almost forgot she was there! *winky face* And then there are a bunch others, but seriously all I need is Froppy to hop on over to me and I’m all set!

Right. So enough with the characters otherwise we’ll be here all day. How is the show? It’s honestly great, with moments of brilliance but the first season feels constricted by a sense of reigning things in for the sake of future encounters. It’s like in a video game when the main villain appears in a cut scene for a minute just to remind you they are there, just teasing bigger and better things to come.

So it’s a season of set-up? Not so bluntly as that, there’s still big action and character development and great heroic moments for most of the characters, but because it’s a part of something that you know instinctively is going to run a long time the stakes are never as high as they probably should be.

Recommended though? If you haven’t watched My Hero Academia yet you should probably go back in time and watch it before you read this review, because the first season is better when you don’t know that it gets better later. But if you don’t possess that superhero power than I guess you’ll just have to do your best to forget about all this… I think I know a sensei who can help you out with that…

Well for the rest of us, score please? A veritable gluttony of fun and interesting heroes on the roster is the solid foundation to a truly great show with ample action, pathos and personality. My great anime sense is tingling, 89 out of 100.

Oh no! This review was only 19 questions long? What will we do?! Ah you see, now you’ve discovered my superpower. Padding out this particular review format with jokey questions… yeah, it’s a pretty shitty superpower all things considered…