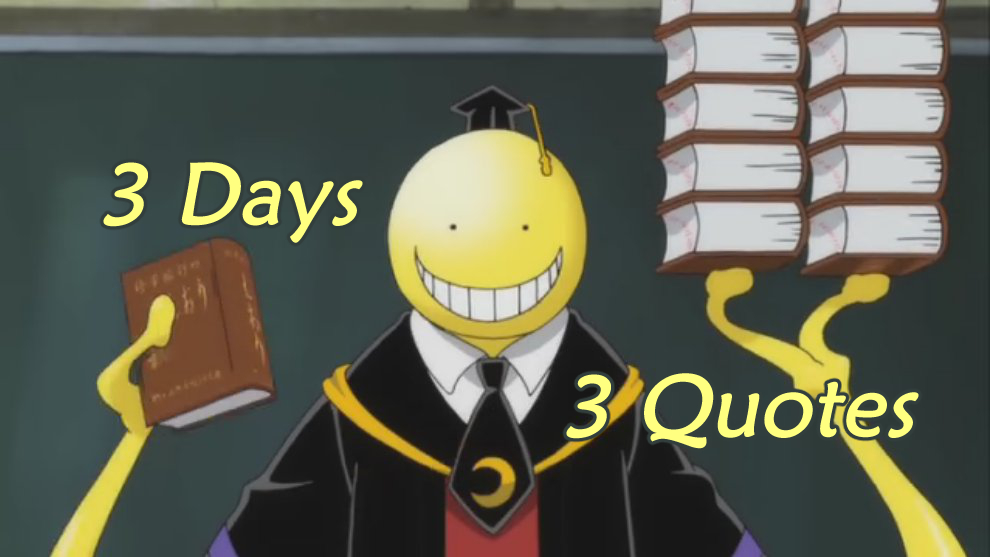 And the final day of the 3 Quotes 3 Days challenge has come! It went so quickly!

Rule refresh please? Sure, so the rules are you have to thank the people who selected you, then the meat of it; post a quote every day for 3 consecutive days, and then nominate *three bloggers each day to do the same. Also, I’m doing two quotes because I got two consecutive nominations, anyone else who’s nominated doesn’t have to do the same!

*? You know what it means by now, I’ll nominate however many I want, damnit!

Like anyone’s going to stop you! So who nominated you again? Ryuuiji and Arthifis!

Cool first quote of the last day is?

“If great talent knows the frustration of defeat early on, it can become even greater.”

Interesting, what’s it mean to you? It means a great deal, sure it’s a simple sentiment but it’s an important thing to remember, no matter what you’re doing in your life. Defeat can allow you to learn from your mistakes, refine your skills and hone your craft as well as make future defeats more palatable by comparison. Never give up.

Well said, and the second and final quote that you’re going to leave us with? The last one is from a song, I had so many songs that I wanted to feature but every time I had a song in mind I realised it was the song as a whole that I was gravitating towards rather than a lyric or lyrics, so while this isn’t my favourite song of all time it does contain some of my favourite and most relatable lyrics. I could have posted all the lyrics but I chose to pick just the last four lines. But I do recommend you listen to the whole song if you get the chance.

“So if you’re careful / you won’t get hurt / but if your careful all the time / then what’s it worth?”

Well this has been an interesting experience. Indeed, and for the final nominees: @ameithyst @anerdyperspective @shadowcat99

Thank you for reading. Yes, thank you, I hope you enjoyed reading these as much as I enjoyed talking about them!