An Anime QandA review for Isekai Izakaya: Japanese Food From Another World Episode 1.

And I’m guessing from that title it’s a food anime? Yes! If there’s one thing I hone in other than cute girl anime it’s food anime! 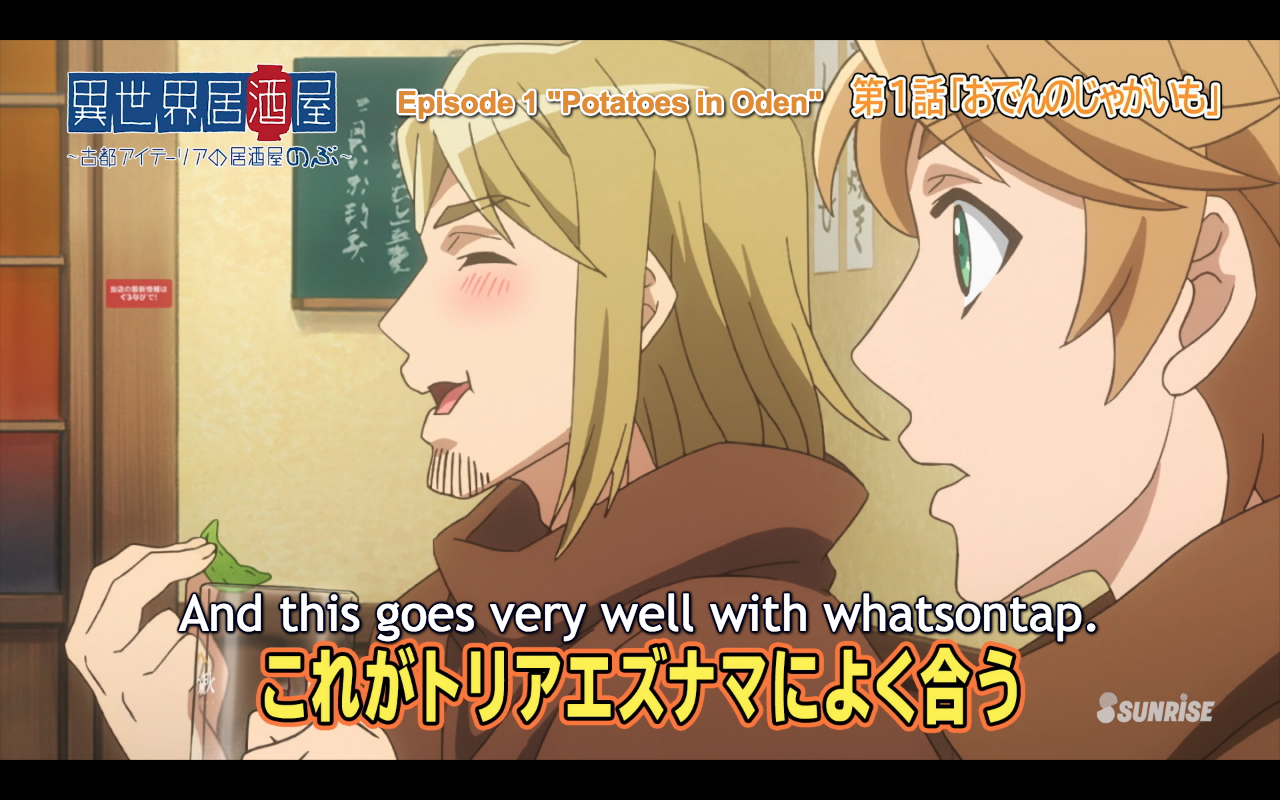 So what’s this one like? Well at first I was worried it was going to be too much like 2017’s surprise favourite ‘Restaurant To Another World‘, and while the similarities are pretty close. I.e. Japanese style pub food sold by Japanese chef to inhabitants of a fantasy world through mystical restaurant that has the ability to be a portal between worlds. 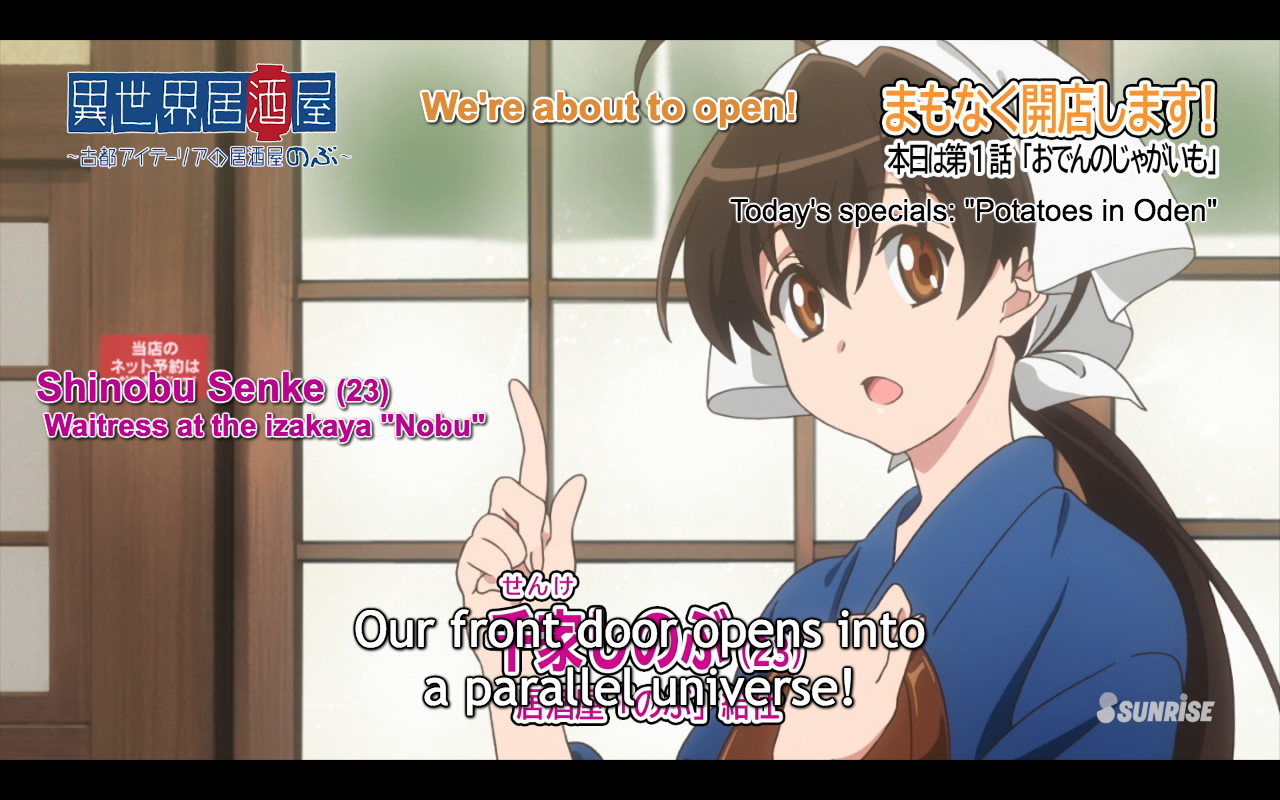 But there’s key differences I assume? Well I can’t speak for the light novel it’s based on, but basically what this anime is is just a 15 minute tourism video for Japanese pub food.

You mean it feels like it is. It isn’t actually— The main production sponsor for this anime is Japan National Tourism Organization (JNTO). 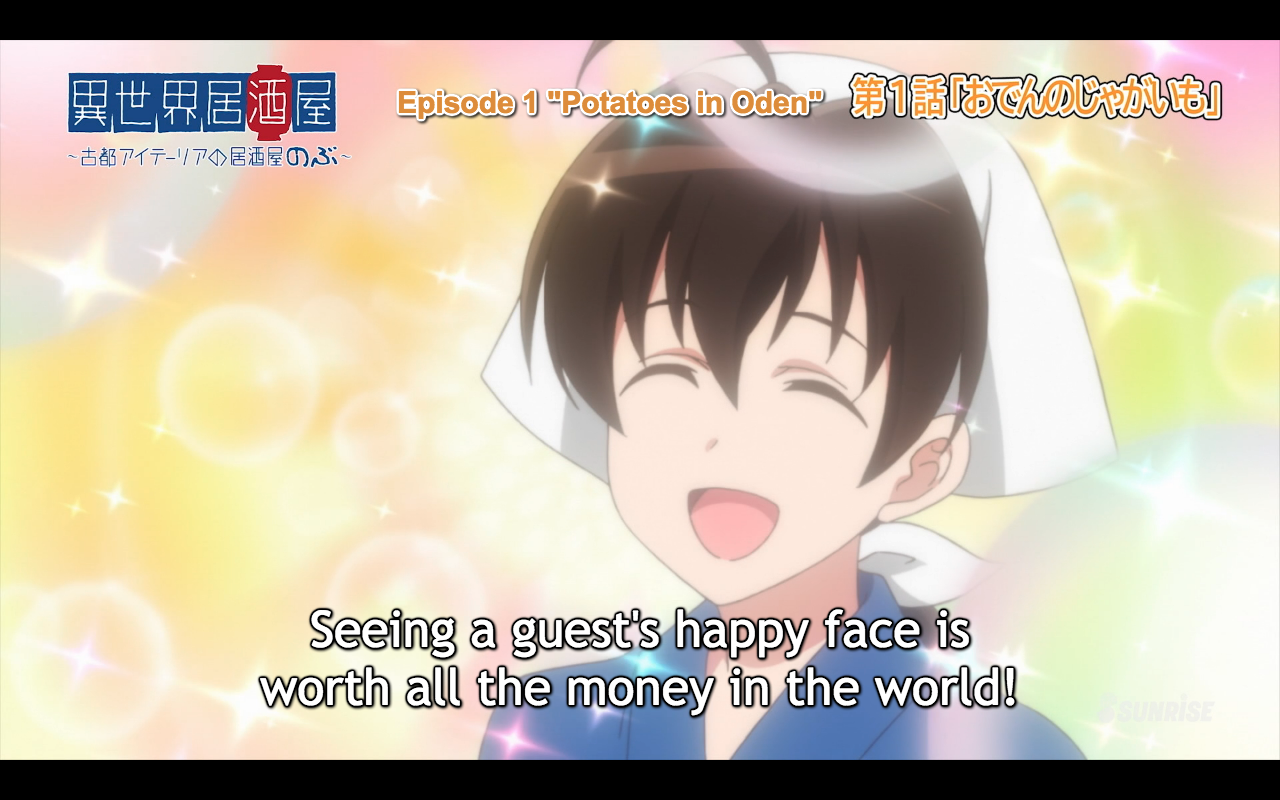 Oh. Which is kind of bizarre considering it takes place in a fantasy world, though a lot of the show is just these Germanic inspired, pre industrial revolution era people salivating and loosing their damn minds over how good Japanese pub food is. Which to be fair, it is damn good if I do say so myself. 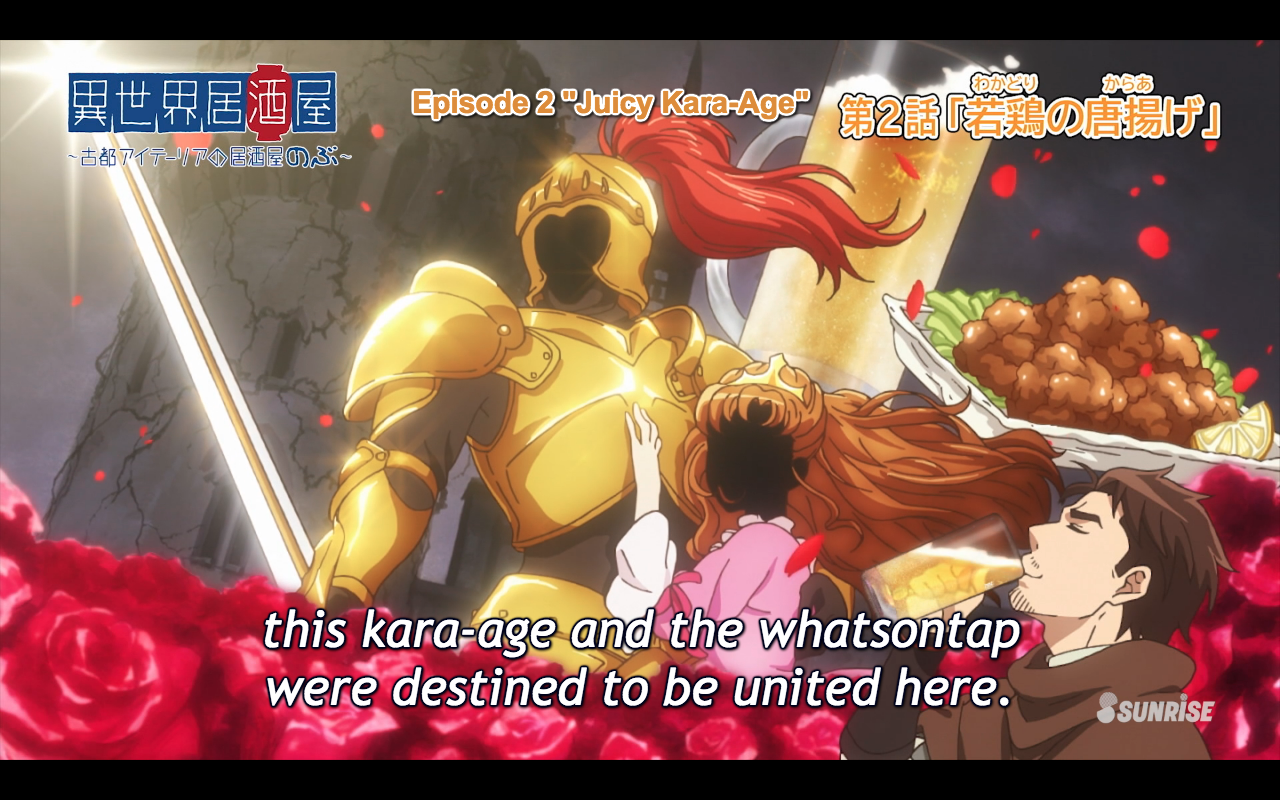 Right, so what’s the plot of this show? Didn’t I just say? It’s literally just people eating Japanese pub food and having foodgasms (not Food Wars style ones mind you, just the regular kind). There’s a tiny bit of characterisation, and a hint of the world outside, but it’s mostly just people eating food. 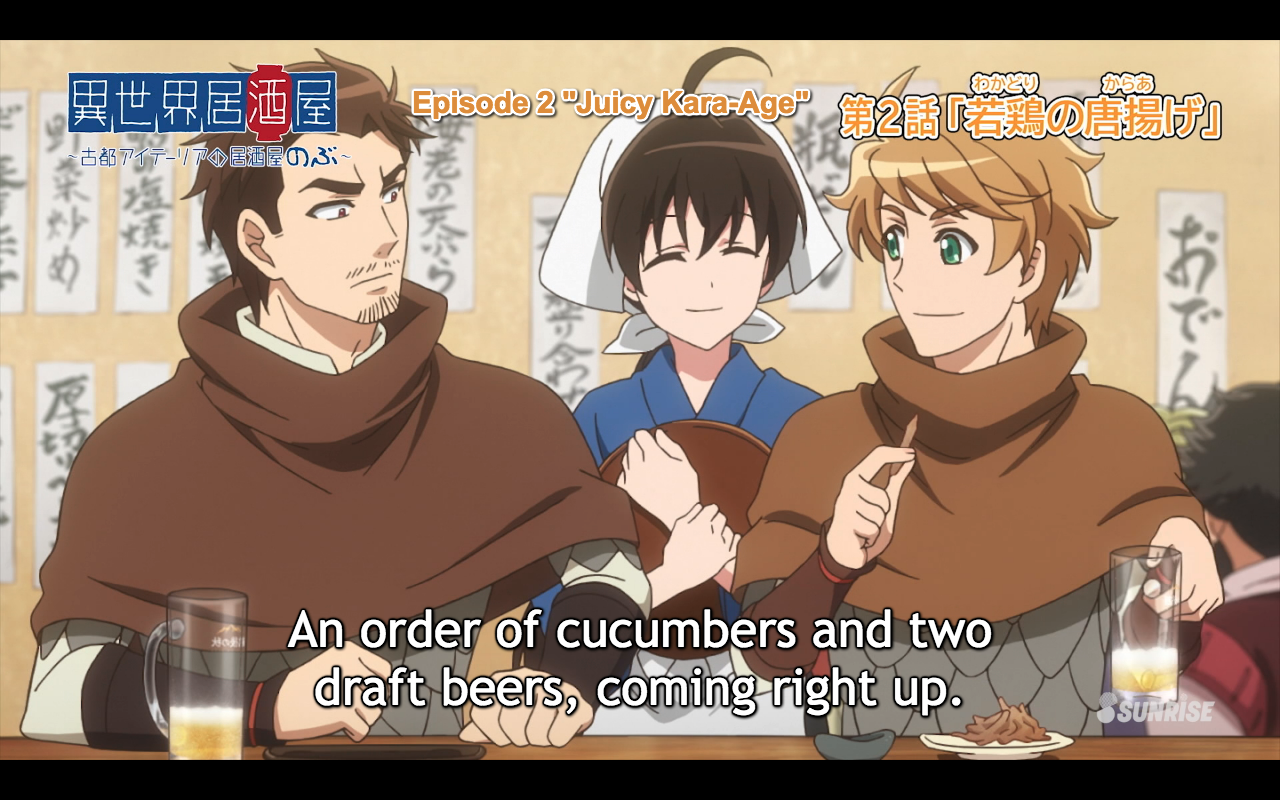 Hmm. Oh! Except the last 5 minutes of each 15 minute episode is live action footage devoted to something food related. In the first episode there’s an instructional video on how to make Daikon steak and potato salad (which I’m keen to try myself) and the second episode ends with a Japanese celebrity visiting a Karaage place and eating the most ridiculously crunchy looking fried chicken I’ve ever seen. 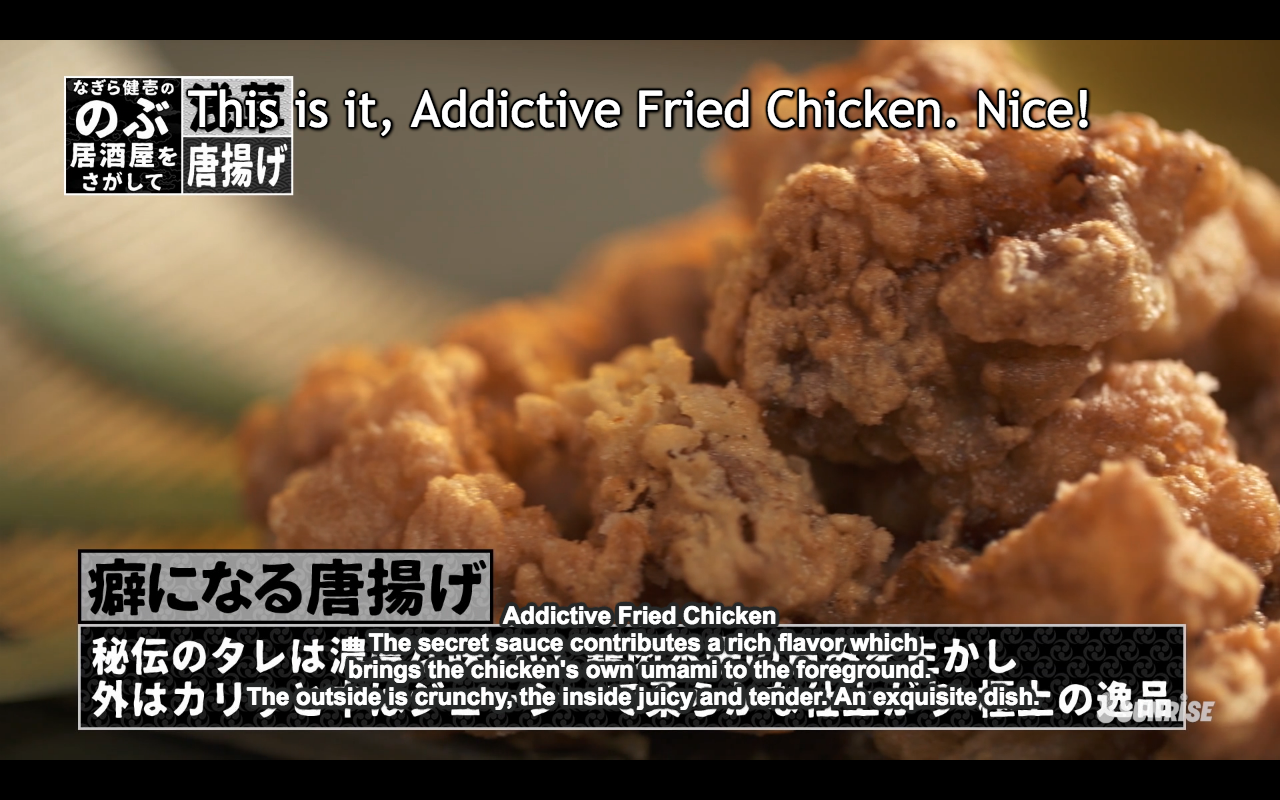 Live action… right… Hey, I’m just as confused as you are but I’m not one to criticise a good thing just because it’s a little weird! 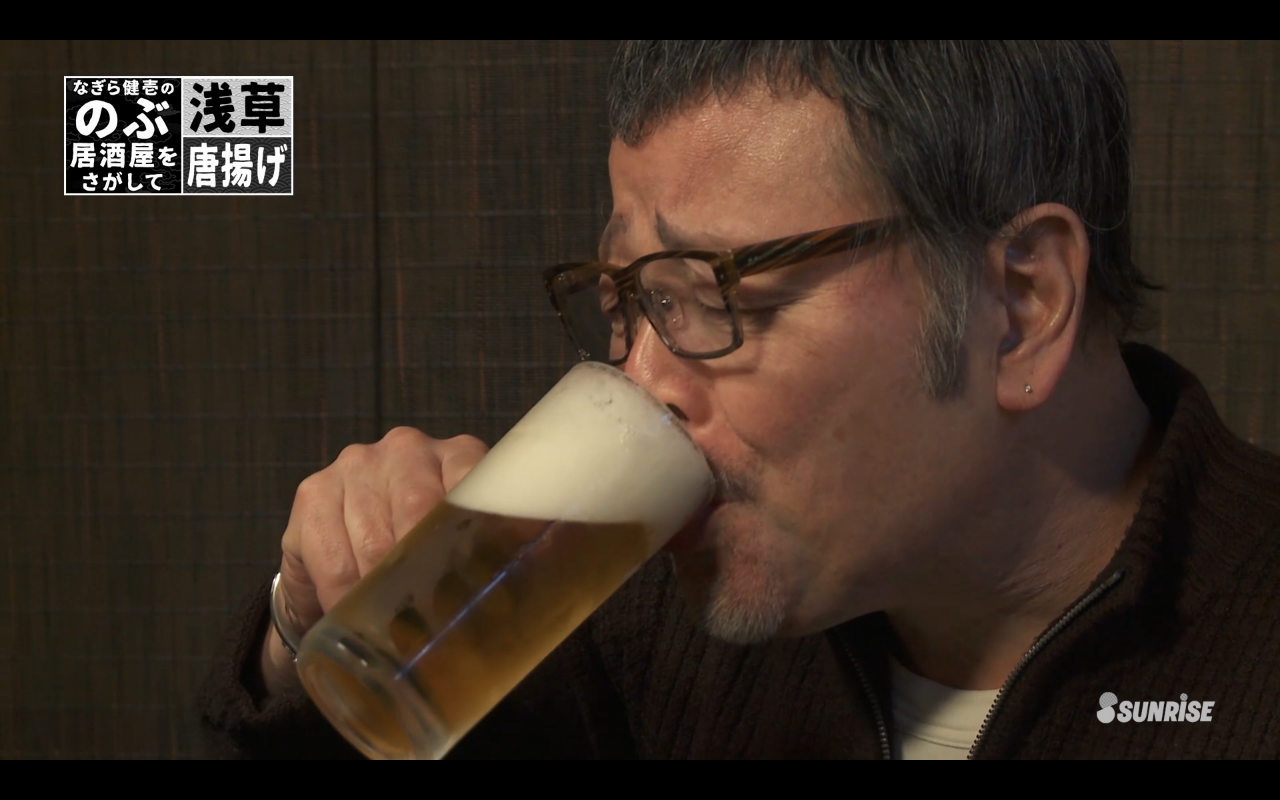 You like this show?! Yeah of course, it kind of reminds me of those Japanese ‘light entertainment’ programs you see on Japanese TV where people just go to different places and eat food, and it’s just watching vaguely famous people reacting to delicious food. It might sound boring but the Japanese people’s enthusiasm and respect for food is just so infectiously endearing I can’t help but smile at it! 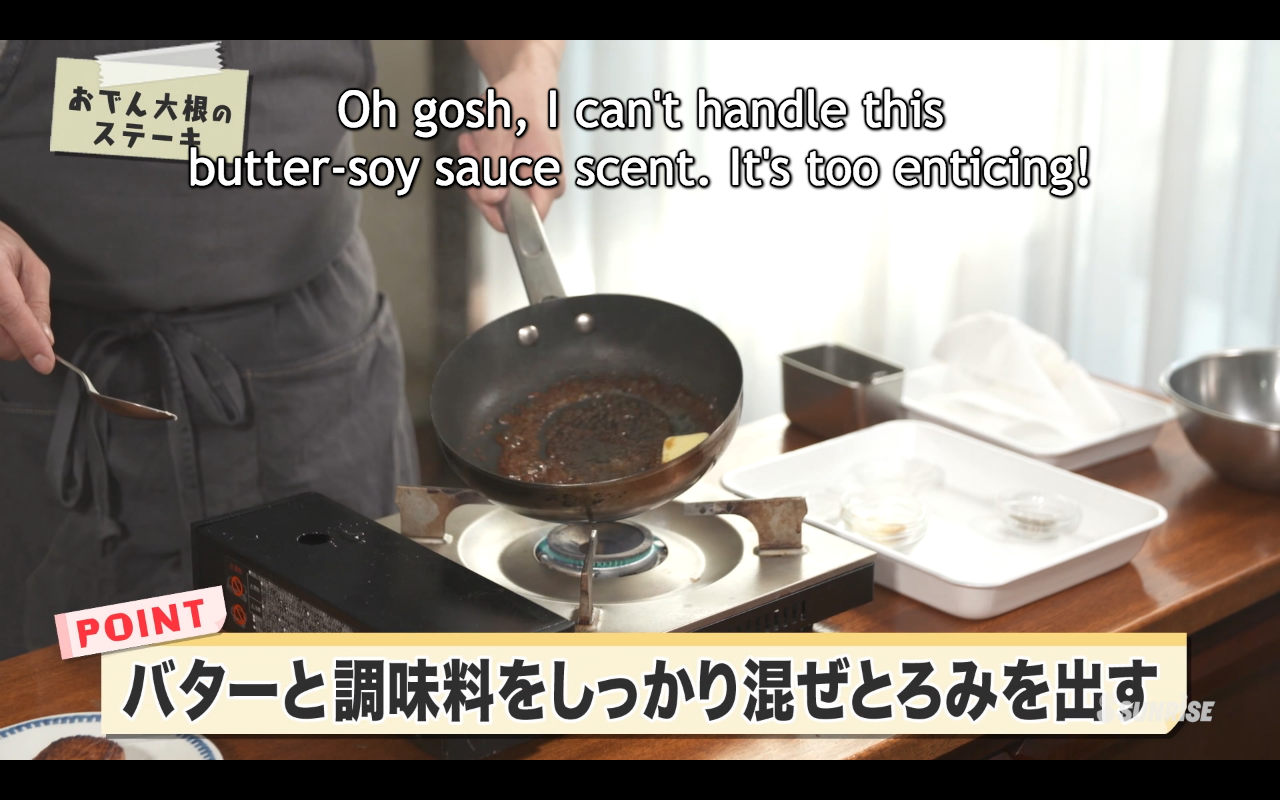 O…kay then! Do you recommend it then? You’ll know just by reading the review if this is the kind of show for you, I mean it’s nothing special, it’s certainly not Restaurant To Another World quality, in fact even after just two episodes it’s kind of repetitive, but I don’t know, I just liked it. Not enough to recommend it but enough to keep watching it! Even if it is just a glorified tourism add for Japanese pub food!