Wait, you’ve only reviewed the first season? What happened to the second season review? Okay! I get it! I’m really bad at remembering to review second season’s before third season’s are released, I’ll get around to it one of these days!

Sure, you mean when you run out of content. Where have you been?! There’s been plenty of content!

Tell me about it, I haven’t had a day off in 3 months! You don’t need time off, you don’t exist! 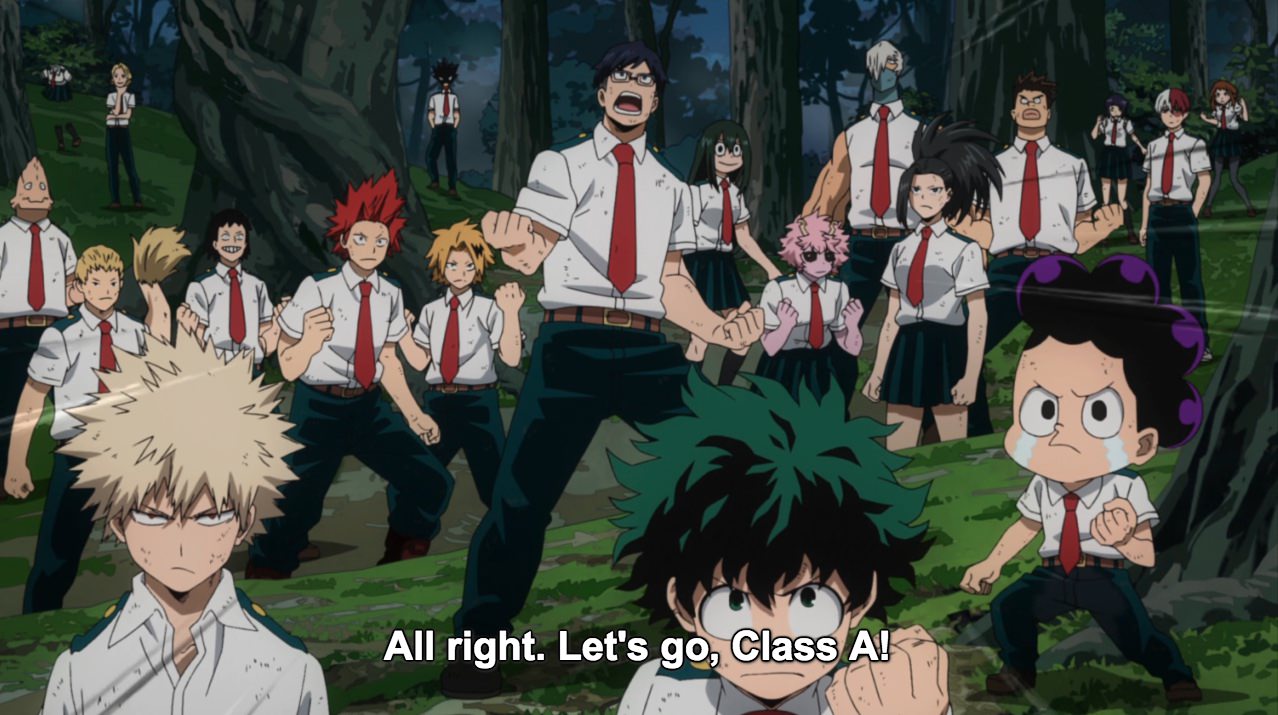 So what happens in these first two episodes of season 3? Well, the first episode is just a recap of some events of the previous seasons to help bring people up to speed with what happened, not sure how necessary it was… I mean everyone watching should have watched the previous two seasons and season 2 only ended like 5 months ago so there’s no real excuse in having forgotten what happened!

So it’s a pretty pointless episode then? Well I guess that depends who you ask, it does take place at the school pool so plenty of bare chested and muscular boys to look at, if that’s your kind of thing.

I’m guessing you didn’t enjoy it much all then? It was fine, I would have preferred a proper episode but it still had some funny character moments and good lines!

Episode 2 then, any better? Much better! The training camp began, and it started with a bang—literally—as class 1A is tasked with finding their own way to the camp. A task which is made all the more difficult as a professional hero team called ‘The Pussycats’—who run the camp—litter their way with powerful monsters made of dirt! There’s some really cool teaming up and fighting of these monsters, who while never posing much of a threat tire the heroes in training out before they even reach the camp.

And what happens for the rest of the episode? Hot springs mostly!

Really?! Okay that’s not true but it does seem like the fan-service has been already dialled up this season, though it is fairly equal representation at this point for what its worth.

Uh-huh… We’re also introduced to an annoying little kid who is the cousin of one (or both?) of The Pussycat’s, and he hates heroes. Which we learn is because his parents were heroes and they died when he was young and blah blah blah… I don’t really care.

Wow, cruel much? I’m sorry, but I really don’t see the point of this kid being here, like sure he’s probably going to give Deku some valuable lesson about the responsibilities of being a hero or what not, but it’s already rubbed me the wrong way. Just give me top banter between the kids of class 1A and Eraserhead being a dick to his students and burgeoning feelings between Deku and Ochako and more action and more villains, because that’s what I signed up, for that’s what I want!

Okay then, fair enough. So do you recommend the show? For newcomers it goes without saying, but start at the beginning, it’s not that many episodes to catch-up and it’s a super fun ride that only gets better with the second season. If you’ve watched the show and not liked it, this isn’t going to change your mind, but if you love it you’re probably already watching. And while I’m not to keen on the current plot line with the hero hating kid Kouta, I’m still going to watch the hell out of every new episode because this show is just so much fun and the characters are fantastic!