A 20 Question Manga Review for How To Build A Dungeon: Book of the Demon King, Volume 1.

Warning: This review may contain content and imagery that may offend.

What’s the manga? How To Build A Dungeon: Book of the Demon King, Volume One.

I’m guessing this isn’t an instructional manual on how to actually build a dungeon? Well, I mean it certainly goes into a lot of detail, but unless you actually possess magical powers, no it will not be of any practical use on how to build a dungeon.

Right. What it might help you with is show an example of how to write a character who is unambiguously a ‘bad guy’ but imbue him with enough positive traits that despite some of his actions—which range from questionable to downright dastardly—you still are able to root for him in a way that you might a ‘hero’ in another story.

So he’s an anti-hero, then? I’d say that’s fairly accurate, the only thing that’s difficult to qualify is whether an anti-hero can exist in this kind of story.

What do you mean? What kind of story is it? Well, it’s almost like one of those building simulation/management video games where you have to build something, whether it be a theme park or a hospital or even more specifically an actual dungeon like in ‘Dungeon Keeper’ or ‘War for the Overworld’ (neither of which I’ve personally played but have seen played).

Right, so how’s that work in manga format? Well the protagonist, Aur, wants a dungeon to call his own, fill it with powerful monsters and raiders, and deadly traps and spells. So he summons a Succubus to be his right hand woman, basically she’s his construction manager and he delegates tasks to her, who she in turn delegates to lower life forms to help build the dungeon.

This isn’t going to devolve into another low-brow review is it? I promise not to talk about boobs for too long! Besides, there’s far more at play here than a litany of pointless titillation.

Fine, who are the characters? Well as previously mentioned there’s the titular would-be demon king Aur, he’s cocky and kinda arrogant but he’s also intelligent and cunning. And maybe attractive? I don’t usually go in for his type but I could see why some people might be attracted to him. He’s also got a wealth of mana which is like magical currency, so that’s something that makes him alluring to certain people, such as Lilu—the succubus he summons. He’s only known her all of 15 minutes before they’re having sex so I mean at least this isn’t some long-winded ‘will they won’t they’ harem manga with a protagonist who’s sexually inert.

I guess that’s good… if you’re into that kind of thing… Ain’t nothing wrong with a bit of sexy times!

And the others? Some time later an adventurer named Yunis comes wandering into the dungeon to defeat Aur, but she is outmatched by his abilities. Her induction into his burgeoning dungeon harem is decidedly ~problematic~ if only because her consent to his sexual advances only comes after Lilu has used her succubus wiles on her and there’s an element of coercion to the whole thing. But, not only does it fit with the whole anti-hero thing he’s got going on but she later saves her from her own village who goes full ‘angry mob’ on her. So she’s got at least some element of respect for him and isn’t completely without free-will.

No, nothing. Do go on… Hmm, okay. And the final (for Volume 1) addition to his harem comes from an interesting side-plot. One of the neighbouring villages, who have pledged their fealty to Aur; in exchange for protection and a supply of mana to help the crops grow has to offer a female virgin to him. The only “acceptable” virgin they have however, is 5 year old Mary, now Aur might be a bad-guy but he’s not a lolicon. He insists on someone older and the only other one in the village who fits this description is a young woman with an unsightly disfigurement. See she disfigured herself with hot oil in order to protect herself from rapists who were invading the village some years ago.

Yikes, that’s dark. Indeed. So Aur meets with her and sees enormous potential in her and so takes her and the 5 year old, and says the village doesn’t have to provide another human offering for 10 more years.

Okay, so what’s his angle? Well he sees a darkness in her that’s even intimidating to him and he wants to help cultivate this dark potential and so gives her the choice to remain a disfigured human with no future, or to becomes his unholy apprentice and grow powerful in order to smite all those who’ve wronged her since. She gladly accepts and comes to be known as Spina henceforth. Also, conveniently for everyone the ritual to make her his apprentice gets rid of all disfigurements and leaves her with a trendy piece of face jewellery instead.

Right, so I haven’t really gotten a solid idea about Aur’s character and what makes him as you early said: “unambiguously a ‘bad guy’,” and also “able to root for him”. Good question, so obviously his actions are self-motivated, he is thoroughly aligned to a side of darkness in this fantasy universe, but he’s never needlessly cruel, he’s strict and unforgiving if pushed but he never punishes anyone undeserving and is willing to listen to reason. He’s got a kind side, he doesn’t disrespect women or mistreat children and while he is very sexual active with I think as many as ten different women throughout this one volume, he never leads them on or hurts them in any way.

The gentlemen demon lord, sure why not. So final score and recommendation? I loved this book, I liked that it was so different from a lot of other harem style manga out there and not just because of how sexually active the protagonist was. It’s also darkly comical and occasionally just plain goofy, which is a much needed change of pace from some of the more serious subject matter. For fans of erotic-oriented manga and protagonists of questionable moral alignment; 87 out of 100. 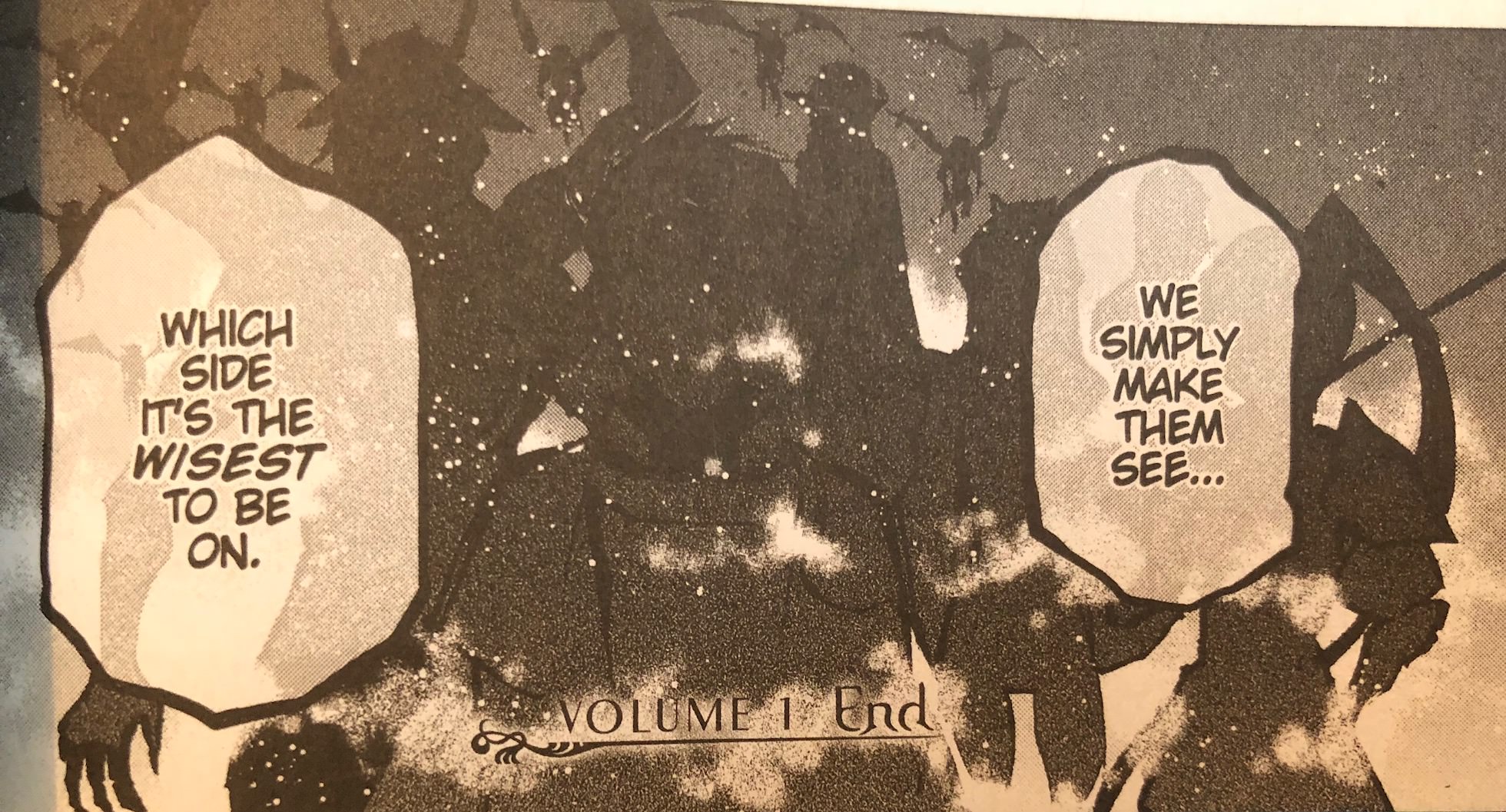 6 thoughts on “How To Build A Dungeon: Book of the Demon King Volume One – 20 Question Manga Review”