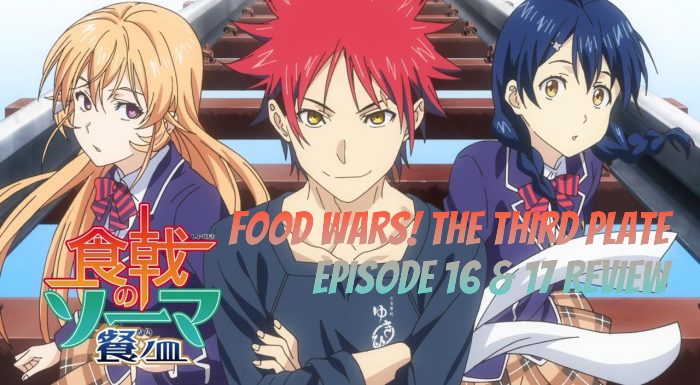 You didn’t talk about the show last week? Ran out of things to say about it? It’s difficult because a show like this which is deliberately taking its time and spreads the prep work for the battles and then the battles themselves over multiple episodes, don’t really lend themselves well to single episode reviews. I mean, sure I could talk about every little thing in exhausting detail but my review style isn’t like that.

Fair enough, so what happens in these two episodes? Well, in Episode 16 Soma and Akira finally get to talk since we learnt of Akira’s defecting to Central as well as becoming the new ninth seat on the Elite Ten. The challenge ingredient for Soma’s exam is announced too, it’s Bear meat, which proves a tricky ingredient to work with mostly due to its pungent aroma which can be ~overwhelming~ if not properly handled and downright disgusting if disrespected. Most of Episode 16 involves Soma figuring out the best ways to use bear meat in preparation for the battle against Akira who is a master at utilising spices.

Hmm, doesn’t sound like a lot happens in it then? Well, Kuga arrives to give Soma some “moral support” but really he’s just there to stir him up. Also Kuga’s voice actor sounds so much like Soma at times, when the animation wasn’t showing who was speaking I sometimes got confused as to who was talking. Not really a fault, just something that I noticed. Also, Dojima, a character from a previous season and friend of Soma’s father arrives to watch over the exam.

I take it that’s important that you’re telling me that? Well… let’s just say if you like nude men you’re in for a treat in Episode 17!

Well I don’t, but go on. Episode 17 opens with Soma, Kuga and Dojima having a bath together and there’s a lot of abs and butts and well, don’t ever say Food Wars doesn’t offer equal opportunity fan-service!

…Ah… Fair enough. So, uh… what else happens in the episode? The battle commences and we get even more characters introduced, albeit in the form of the taste-testers, who, at this point are only here to have their clothes blown off while tasting the delicious meals served to them. And oh boy it must me by birthday because we’ve got adorable twin girl’s!

*sigh* And how’s the battle go for Soma? It seems to go well, the twins get their clothes blown off by the tastiness of his meal and moan in pleasure, always a good sign. But we don’t know the full result because the episode ends just as Akira is serving up his dish! Damn you cliffhanger ending!

I see, so how’s the season progressing so far, in your opinion? It’s classic Food Wars so it’s hard to even find fault with it. Though I thought it was interesting that a character in Episode 17 (can’t remember who) mentioned that it seemed unlikely that everyone was going to pass this exam, considering they’re all going up against members of the Elite 10. And that’s a very valid point, it would be unrealistic if every side character makes it through despite these exams being tougher than any previous year. I certainly hope that at least one character is expelled because otherwise the stakes aren’t really there. I mean I’ll still continue to watch the show if everyone does make it through because it’s fantastically entertaining but I think it’s about time someone is expelled from Totsuki. I guess we’ll see which way the show goes in future episodes!