A 20 Question Manga Review for Though You May Burn To Ash, Volume 1.

What’s the manga? Though You May Burn To Ash, Volume One.

And what’s it about? D’you ever buy a manga based solely on it’s cover without nary a glance at it’s plot synopsis?

I’ve never even read a manga, let alone bought one… Alright, fine, you ever watch a movie or read a book based on the cover image alone?

Err, I imagine so, I mean that’s what covers are there for to entice the reader/watcher? Why? Is that what happened here? Yes. Yes it is.

And was that a bad decision on your part? Yes. Yes it was.

And where’s the problem (aside from the obvious)? This manga isn’t sexy at all! It’s deeply ~problematic~ and it makes me want to throw it in the bin.

Yikes! Care to elaborate? Well not really, but since I’ve already gone this far I might as well commit. So this manga at least has an interesting premise, it’s about a doting brother trying to raise enough money to save his terminally ill sister from a certain death. See she needs a super expensive experimental overseas operation to save her life except he’s kind of a screw up and they have no other family than each other so it’s literally down to him to save her. One day, while returning from the hospital the brother is visited by a mysterious being who asks how far he would be willing to go to get a shit-ton of money to which his grief addled mind replies he’d not only kill someone, he’d sacrifice his own life and soul to get what he needs to save his sister.

Next minute? Next minute he’s dead and in a sort of limbo-esque existence except now instead of being a plain 20-something year old dude he’s a cute high-school girl surrounded by a bunch of other cute high-school aged girls and they’ve all been brought together by a sadistic “angel” who’s offering them billions of Yen as a prize to winning her twisted game. 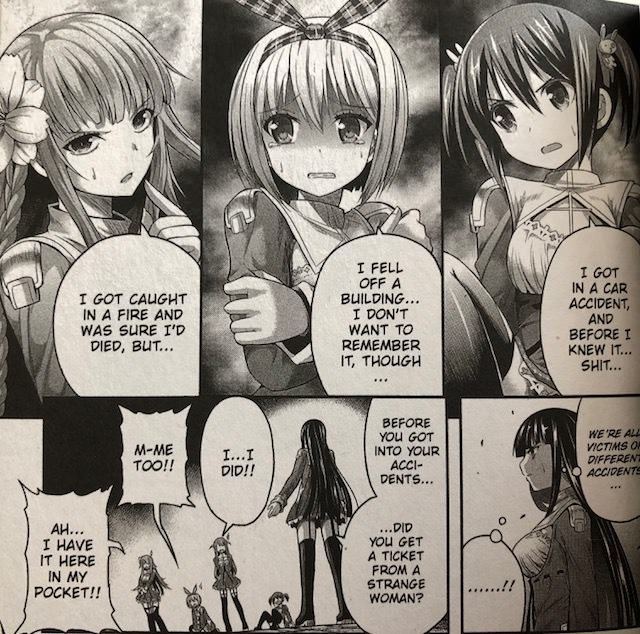 Uh-huh… And what’s the game? Basically it’s a dice-style ‘odd or even’ betting game with an element of bluffing and calling out other people’s bluffs in order to win more money. It’s a pretty interesting concept and it’s well-executed, but did I mention this manga is problematic as all heck and I kinda hate it?!

“Intent”? To show high-school girls being brutally tortured and murdered while also leaning heavily into the sexualised nature of the characters for the purposes of arousing those are inclined to this sort of thing.

Isn’t that just an assumption? Yeah of course, but I mean there is literally no reason given for all the characters suddenly being high-school aged girls in cute uniforms so I have to draw that conclusion.

Right. So imagine instead the characters aren’t all sexualised anime high-school girls, does that make it better? Maybe, I don’t know. There’s a lot of a compelling story-telling here, the sadistic angel character is pretty funny and crazy at times plus there’s some genuine depth and emotion to the protagonist and his relationship with his sister. It’s very dark but it’s very well written.

Can’t you just skip the violent and gory bits and enjoy the story and characters? I mean, possibly. I just don’t know if I want to support a product like this though, it is interesting enough to keep reading but I can only assume it gets more graphic and more sexualised from here on out, that’s generally how these type of things go. Unless…

Unless what? Well I mean maybe I’m completely wrong and this isn’t ‘guro’ at all! I’m not an expert after all! But even if this is only ~softcore~ guro it’s still pretty unappealing to me. And this isn’t even a ‘cute girl being killed’ issue or a ‘pointless death’ issue it’s that this is someone’s fetish and I don’t get it at all.

So final score and recommendation? *sigh* This is a tough one to give a score to, on the one hand there’s a perfectly competent story going on here, it’s well-written for the most part, is populated with interesting and flawed characters and the ‘odd or even’ style dice game is well implemented, thoroughly explained and pretty easy to follow. But, the fact that ALL the characters look like cute high-school girls even if they weren’t cute high-school girls (or even girls) in their previous life is an ‘interesting’ choice—or it would have been if the only reason they were all turned into cute high-school girls wasn’t just to make their gory deaths and violent tortures all the more appealing to people who like that! As it is, the highest score I can give it is a 62 out of 100, even if the story and characters are deserving of a much higher score.