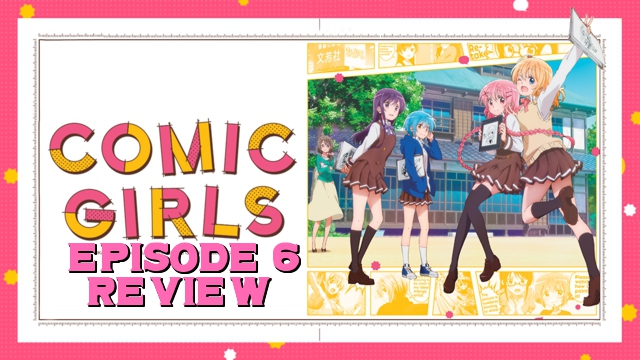 There was nothing but praise from you following Episode 4 and Episode 5, for this show’s “maturity” in dealing with topics that ‘cute girl’ shows rarely or superficially touch upon. Does the praise continue? Uh, err… well, not in the same way…

Oh? Fallen back to earth, huh? Hey, listen, it’s not all doom and gloom, far from it in fact, this is a very strong episode, it’s just not as strong as the previous two, and I wasn’t expecting it to be. What it is however, is very funny and intrinsically connected to events from Episode 5 in very good ways.

Okay, fine, how’s the episode start? Kaos-chan is taking a bath in a thunderstorm when she looks outside and sees a girl hung from a noose by a tree. Only when she screams, drawing the attention of Koyume, the body is gone!

Wow… okay, didn’t expect that. Shit got dark! Listen, I’m going to go ahead and spoil things by saying that all the creepy stuff that happens in this episode is just a previous mangaka Suzu Fura, who specialises in ‘horror manga’ hence all the scary stuff. And to this show’s credit, it goes there. Yes, it’s still ~mostly~ tongue-in-cheek but it’s so well animated that you actually sympathise with Kaos-chan’s terror at this new girl who is feeding off Kaos’ fear in order to inspire her artwork.

So how’s this plot point resolve? Well, Kaos realises’ that everything that makes Suzu “strange” and “awkward” are qualities she too possess, just in a different way (namely not horror-related) and so Kaos swallows her fears and makes friends with the spooky girl. Also it helps that Kaos is kind of a pervert and upon realising Suzu has a cute face and big boobs is suddenly super keen to be close to her.

And is that the episode? Haha, nope that’s but half the episode. Strap in we’re going in again! In the second-half we open with Kaos’, Ruki’s and Tsubasa’s homeroom teacher worrying that one of her students saw her cosplaying as her favourite manga character at the theme park (this occurred briefly in Episode 5). As a respectable teacher she is of course terrified of anyone learning that she’s actually an otaku!

Fair enough, it’s pretty shameful. Quiet, you! So what transpires is basically a bunch of amusing misunderstandings and near misses as Tsubasa tries to hide the fact that she’s falling asleep in class because she was up all night finishing a manga manuscript while the teacher tries to get this information out of her in order to ascertain whether they saw her cosplaying at the theme park. It all comes to a head on the school rooftop as the teacher reveals her fondness for the particular manga and manga character she dressed up as, that character being the protagonist of Tsubasa’s shonen manga!

What are the odds! At first the teacher doesn’t believe that Tsubasa is the mangaka, but once she reveals the manuscript she was up late reading there is no denying the fact! Both teacher and student are properly schooled in the importance of being open and honest, Tsubasa getting her first one-on-one feedback from a fan and the teacher learning that you can’t judge an author by their pen-name. Seemingly a recurring theme for this anime…

Okay then, so all good? Pretty much, I liked that this episode took a few more risks in terms of visuals and tone. Also, it was particularly funny throughout. Not much else to say, oh other than Koyume is super-gay and I’m totally on board for wherever that takes us in future episodes!