I know what one of those words means? Are the other words Japanese? That’s racist.

What?! I don’t know what Lostorage means, nobody does…

Google says it’s a “portmanteau of ‘lost’ and ‘storage’ to in relation to losing memories”. Oh… well yeah, I guess that makes sense…

And WIXOSS… is a card game? Stop Googling things, I’m the one who’s supposed to know everything! But yes, it’s a trading card game, kind of like Magic the Gathering except with cute and sexy anime girls on them. 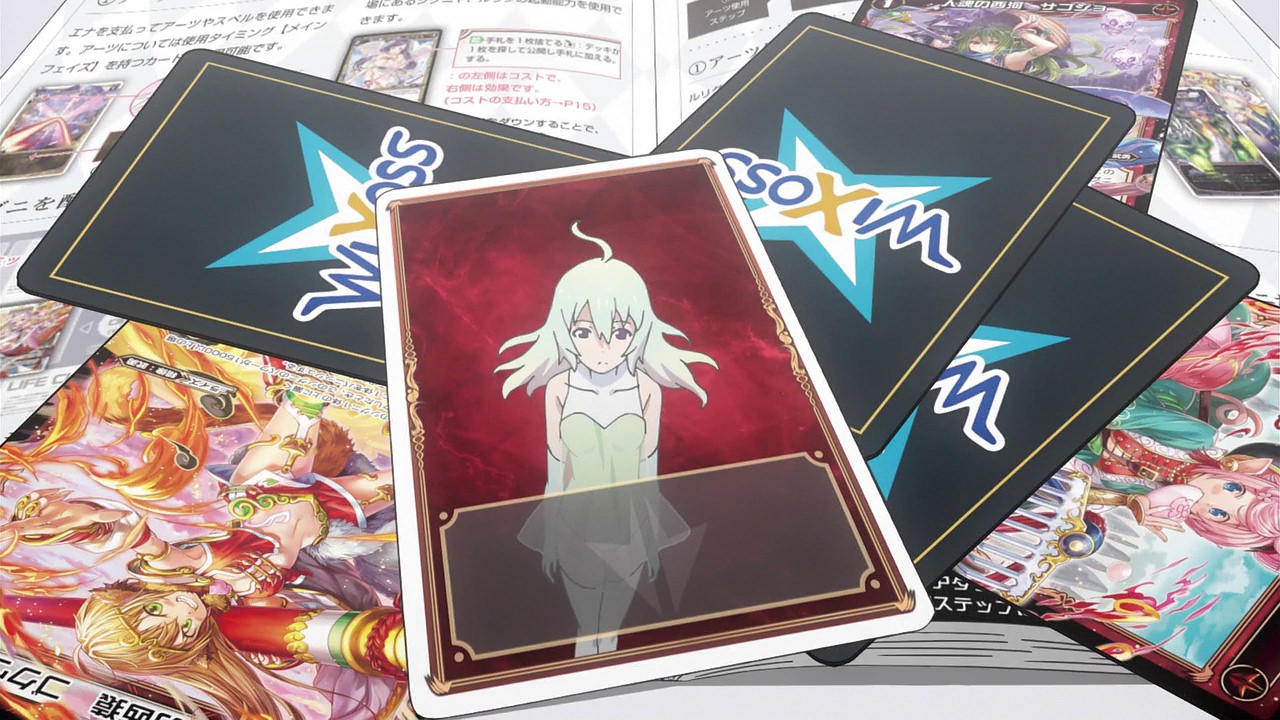 And so this show is a flashy, fan-service filled harem anime then? Nope, it’s a pretty serious, psychological character drama about a group of characters who are forced into playing a high-stakes card game, if they refuse to play they loose their memories one at a time, and if they completely loose the game they’ll disappear from the world entirely.

Oh… okay. That’s more serious than I expected! Me too…

You sound… disappointed? No, not at all. It’s just I figured an anime that was presumably created with the purpose to sell these trading cards would have been more… light-hearted? I didn’t expect any depth from this show and instead I got a whole heck of a lot.

You mention that it was made with the purpose to sell cards? Does that mean there’s awkward product placement throughout? The first couple of episodes are a bit obvious, but unless you’re the kind of person who ~really~ gets upset about product placement it shouldn’t really be an issue. I mean it’s not like it’s trying to hide it, the show’s plot is more or less linked to the card came for whatever reason.

You don’t know why? Well, here’s the thing. This is technically the 3rd season of the show, there’s a 1st season—Selector Infected WIXOSS and a 2nd season—Selector Spread WIXOSS. Both of which I haven’t watched!

Uh… that seems like a silly thing to do? Thing is I was informed by a couple of people that I could watch this season without watching the first two, also at the time the first two seasons weren’t on any streaming service. Of course, as soon as I finished watching this season Crunchyroll decided to make the first two available to stream so more fool me for not waiting.

Right, and did you have any issues following the plot? Well since this season has mostly new characters and deals with a new version of the game it’s pretty easy to jump on board here, but the further the season goes along the more callbacks there are to the first two Selector titled seasons. And yes, I would definitely understand them better if I’d watched those seasons but the show does a decently good job at imparting the necessary information for new viewers.

That’s good then! So who are the characters? Our protagonist is Suzuko Homura a sweet but lonely girl—her father is always working late—and she’s estranged from her childhood friend Chinatsu. They do an excellent job of immediately having the audience sympathise with Suzuko, her isolation is palpable. Then she gets caught up in the potentially devastating Selector battles, and naturally the cast expands. There’s smug asshole Takeshi, who tricks novice Selector’s into battles in order to get easy wins. Then there’s best girl Hanna, a game reviewer who has the most adorable way of talking and a tragic backstory. Actually…

What? All the characters have tragic backstory’s of varying severity, evidently what led these people to be ‘chosen’ to become Selectors is that they all have memories that they want to alter or remember. It’s a smart writing choice that makes even the most minor of side character relatable and is something that makes nearly every Selector battle feel even more high-stakes.

And what’s an LRIG? I thought I told you to stop Googling the show!

Fine, I’ll stop. But what is it? I was getting to that! LRIG’s are like avatars that battle on behalf of the Selector, becoming the physical action to the attacking and defending abilities associated with the various cards that are played. They also happen to be cute magical girls who also have tragic back stories…

How can a card have a tragic backstory? Because they weren’t always just cards…

*shocked emoji* Whatever do you mean? Well, it’s probably better explained by someone who’s seen the previous two seasons but it turns out LRIG’s used to be real girls who competed in the “first battles” vying for the grand prize of ‘one wish to come true’ only to be screwed over by the girl responsible for the game’s creation—or something like that.

Well I don’t know if you’ve convinced me it was a good idea to watch this show without having seen the previous two seasons, but it does sound interesting at the very least. Was that what I was supposed to be doing? Convincing you to watch this show?

I don’t know, I figured that’s what these reviews always were. Anyway, final score and recommendation? If you looked up the synopsis and saw ‘card game’ and ‘battles’ and eyes immediately glossed over with visions of prolonged Shonen battles flashing through your mind, think again! This isn’t some repetitive Saturday morning cartoon, this is a surprisingly dark and moody character driven experience with impeccable production quality and interesting—if admittedly dense backstory. The elements of the game never really make 100% sense but it’s never really about the mechanics of the game as it is more about the devastating outcome of losing one’s memories, or just as bad—having to be the one that sends a player into the void of non-existence. 80 out of 100, turn end.