Okay, fair enough. I’m just so used to you reviewing perverted things, it’s a reflex so sue me. Tch.

So what got you watching a music anime, last time I checked you weren’t the biggest fan of Love Live! School Idol Project? Okay, first of all Love Live is fine, it’s good even, don’t pretend like I don’t like it. It’s just kind of forgettable and repetitive and predictable, but it’s still cute and fun and why are we talking about Love Live in a BanG Dream review?

Sorry, I was just trying to ascertain your state of mind when going into this show. Okay fine, so I already mentioned this in my Love Live season 1 review I was in Japan—specifically Akihabara—and Love Live merch was EVERYWHERE, like literally there were trucks blaring Love Live songs rolling through the streets it was so damn ubiquitous. And as I was perusing the shelves of various anime stores, wading through the plethora of Love Live merch there was by the side the ~occasional~ piece of merch for a show called BanG Dream, a show with much cuter girls who actually play instruments!

Oh no you didn’t! Yeah yeah I know it’s lame to like a musical act over another one (especially a fictional, animated band) because they actually play instruments but I’m an old man and I still inherently respect anyone that bothers to learn play music. 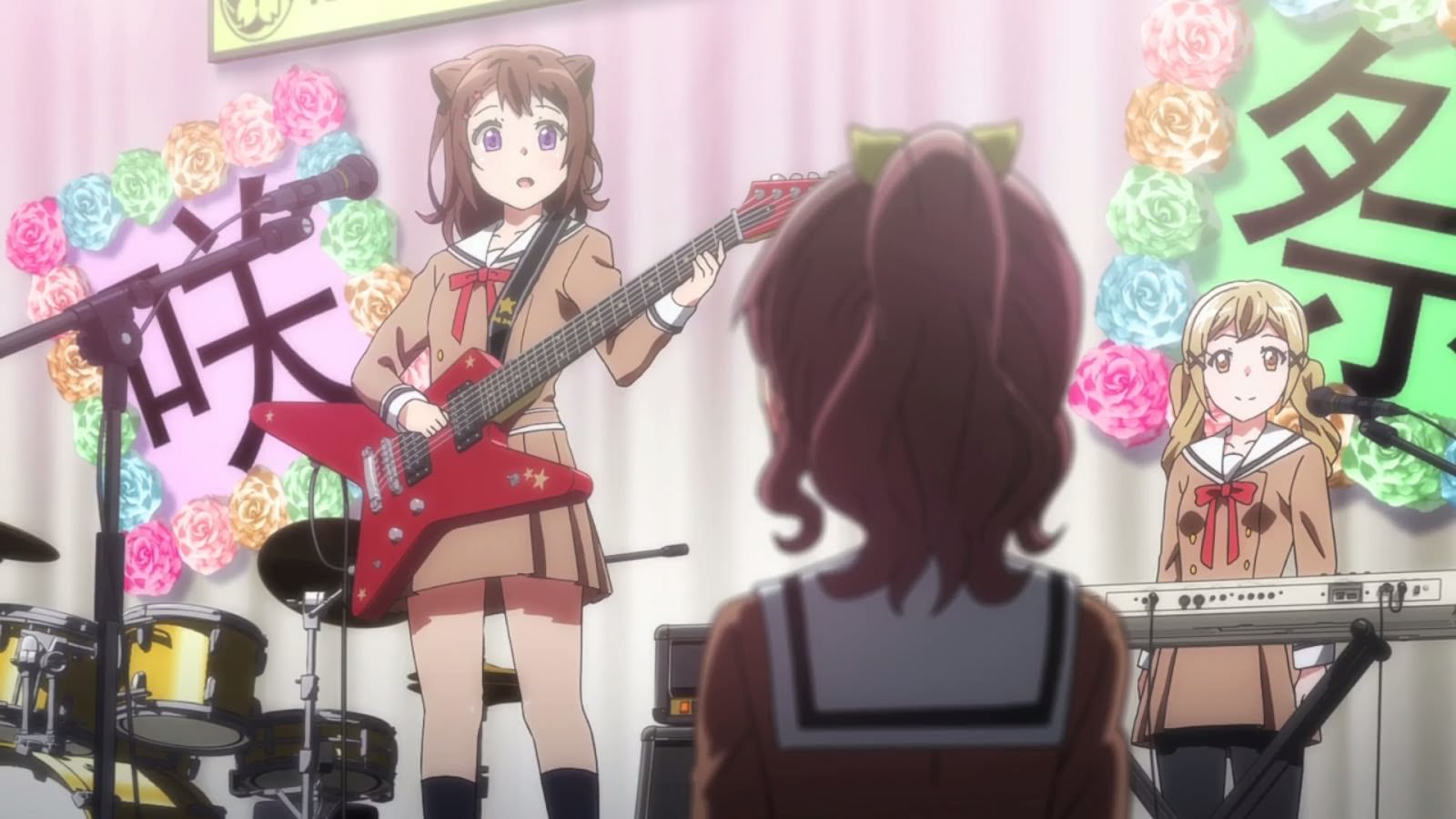 So wait, what does there being a lot of Love Live merch in Akihabara got to do with you starting to watch BanG Dream? I just wanted to see what this other show was like. It’s like going to a store and seeing a whole bunch of Coca Cola on the shelf with big displays and promotions. And then seeing a can of Tab Cola or RC Cola relegated to the side, sometimes you just want to see what the less popular alternative is like.

Right. So all that out of the way, all the external stuff, how is the show? Yeah it’s good.

Just… “good”? So here’s the thing, I really really like the characters here and I actually love that these characters spend this whole series going from mediocre amateurs to kind-of-okay amateurs, rather than going from the bottom to the top with little to no interference. I love that they have performance anxiety and self doubt and family troubles and history with other bands, it’s all a rich tapestry but…

But? But it’s still kinda boring, actually no that’s not fair… it’s kind of ~minimalistic~, if there’s generally a plot point that an episode wants to cover it does so and does little else. It’s very laid back with regard to narrative progression and not in a ‘Laid Back Camp’ way. But… it’s still better than Love Live…

You keep bringing it up. Why don’t you make this a comparison piece? Like ‘BanG Dream is better than Love Live’. Isn’t it a bit late for that we’re halfway through the review—though I guess I have spent a lot of it mentioning Love Live already so it’s not entirely out of the blue… okay, I’ll do it!

So what about BanG Dream is similar to Love Live that it deserves to be compared to it? They’re both about high-school girls who want to enter a super competitive musical field, both shows are about them training to be better and both shows centre around a school/hobby balance, also both shows put an emphasis on friendship.

Right and so it doesn’t seem like you’re just bashing the show what does Love Live do better than BanG Dream? It’s characterisation is more immediate and distinctive and it’s arguably more easy to binge-watch. I had trouble watching more than 2 episodes of BanG Dream on any one week.

And what does BanG Dream do better than Love Live? There’s more of a sense of how hard it is to become even semi-professional, these girls work so hard and by their final audition (after 2 failed ones) they still kind of sound pretty average and the show isn’t afraid to make them sound like this, their singing is raw and unpolished and their instrumentation is amateurish. And they get upset when they fail, they cry and get angry with themselves, there’s a real sense of passion in their craft. Plus I feel like this show is a lot more realistic, it could be argued of course that Love Live isn’t trying to be realistic but I appreciated the more low-key approach to this kind of story. It might be a small thing but the fact that their outfits for their first ‘big performance’ look hand-made and kind of cheap looking was very endearing, especially compared to the other bands. 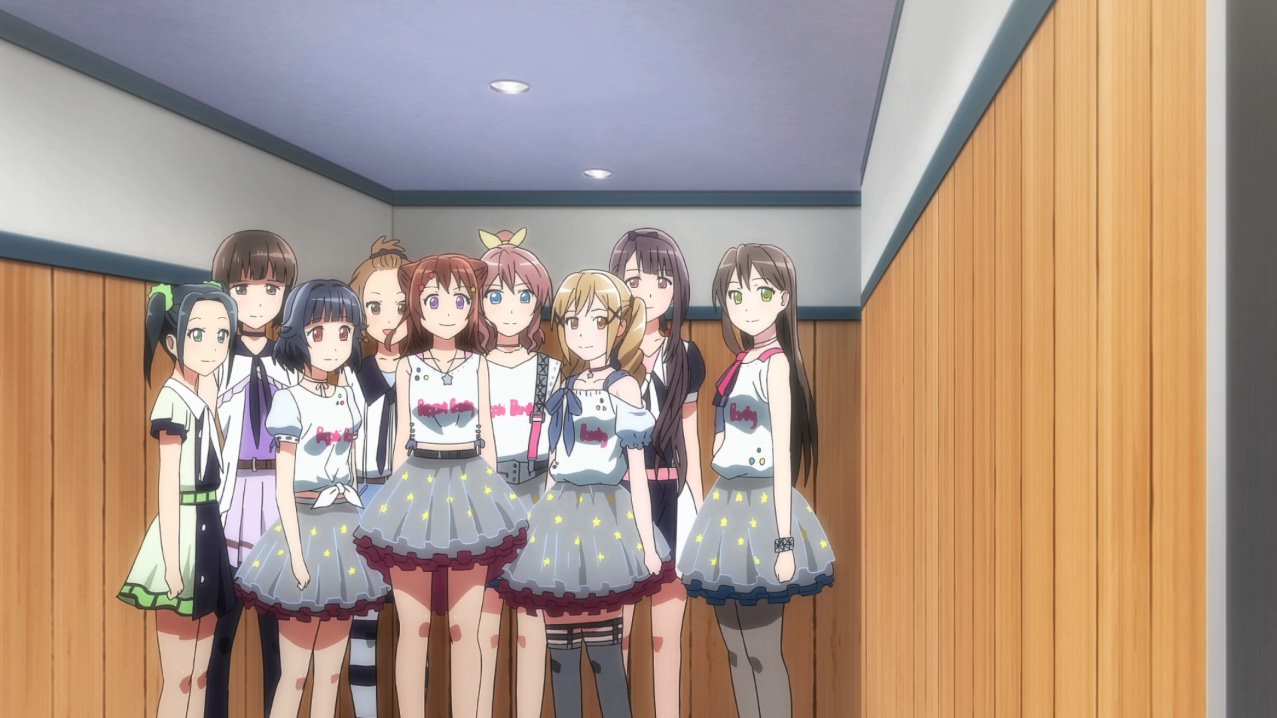 Other bands? Mmhmm, the plot of the first season is the girls of Poppin’ Party (that’s the name of their band) want to perform at an all female music venue called ‘Space’, except they have to impress the Owner before that’s going to happen. But throughout the series we get to see a bunch of different girl bands and they’re all unique and interesting and it’s just another thing that helps set this show aside from Love Live, these other bands offer variety to the music and aesthetics.

But there’s obviously a pacing problem if you can’t watch more than 2 episodes in a row without getting restless. Undoubtedly, the whole ‘it’s hard work, there’s lots of training involved’ shtick isn’t relegated to brief montages, it’s whole episodes, it’s the whole damn series and so the fact that there is little improvement from where they start to where the season ends is a double edged sword—It’s realistic, it’s honest, it’s surprising but it’s not exactly the most riveting thing in the world.

If the point of these music anime is to sell singles and albums but they aren’t especially good. Isn’t that a bit of a problem? They are good though, the OP and ED song by the band is polished, professional and catchy as heck, but i think the way we’re supposed to look at that is that those songs are of the band when they make their professional debut some years from now. This first season is but a small part of a planned franchise. (Seasons 2 and 3) were recently announced for a 2019 air date.

Fair enough. Anything else you wanted to add before we wrap this review up? Rimi is best girl! Oh and I never want to hear “twinkle twinkle little star” ever again…

Right. So final score and recommendation for BanG Dream!? The aesthetic differences between this and Love Live are all a matter of opinion, whether you prefer one show’s characters or songs to the others is entirely down to the individual. Critically speaking however, I found myself more invested in the story and character development in BanG Dream as it wasn’t nearly as predictable as the aforementioned idol show. Both shows are far from perfect, but I found just the entire experience of watching BanG Dream more pleasant, fulfilling and rewarding—even if it suffers from serious pacing problems. This is one dream I look forward to having again, 79 out of 100.