It’s All About Love… & Robots: A 20 Question Anime Review of Darling in the FranXX Episodes 16-20 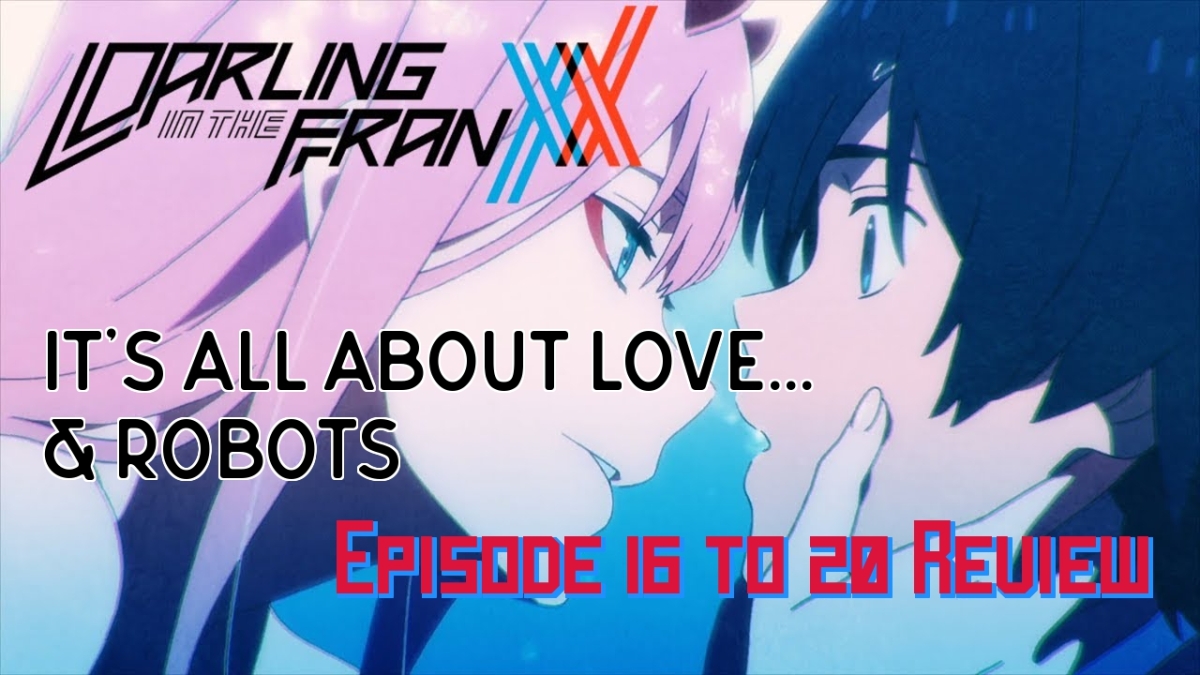 If you haven’t already please read my post: Puberty & Robots – A 20 Question Reassessment of Darling in the FranXX Episodes 1-15 for context to this post.

I feel like you’re pretty alone with that opinion… at least in the ani-blogging community. ~Maybe~ but isn’t that the point of blogging to convince others to a different frame of thinking, shouting outside the echo chamber.

Yeah… good luck with that. Tch.

So what did you want to talk about now? Presumably this is about the subsequent lot of episodes after the self described “first part” of the anime? Yes, episodes 16 to 20. Or what I’m calling ‘It’s all about love’ arc.

So what plot beats comprise this ark? (presume for a second that whoever is reading this at least passingly familiar with the events up to this episode.) It’s a big ol’ love fest up in Plantation 13. Zero Two loves Hiro, Ichigo loves Hiro, Goro loves Ichigo, Ikuno loves Ichigo, Kokoro loves Mitsuru, Futoshi loves Kokoro and Doctor Franks loves all of them! It’s just a big clustertruck of love and feelings and messiness and it’s like the best worst soap opera I’ve ever seen just put against the backdrop of a a generational spanning dystopian sci-fi extravaganza.

That’s a lot of love! Oh and did I mention that not only does Doctor Franks love his Plantation 13 labrats, he also loves the Princess of the Klaxosaurs, a.k.a the long running enemy of the entire series, but the Princess loves ‘Star Entity’ a weapon recently acquired by PAPA—the all-knowing, all seeing overseers in space!

How do you mean? Well it all comes so hard and fast (no pun intended) that you just kind of have to let it wash over you, lest you drown in the madness of it all. With the exception of the partial flash-back episode that helps explain some of how the world ended up as a series of dome worlds in an apocalyptic wasteland, the new sci-fi beats such as klaxosaur princess and ‘star entity’ and secret space aliens who’ve been partially in control of the government this whole damn time!

“Secret space aliens”? Huh?! Yeah, episode 20 closes out with probably one of the hastiest out-of-nowhere space battles in a show that’s up to that point never even mentioned aliens. And you know what? I’m a-okay with that!

Sure, whatever, why not… So back to the ‘love’ aspect of this post as I’m sure that’s what you’re wanting to focus on. What’s the big deal about it anyway? Not in general obviously, just in the context of this show. Love, sex, procreation are all things that have been rendered obsolete by this ‘new world’. As the previously mentioned flash back episode explains, Dr Franks discovered a way to make humans immortal but at the cost of their reproductive capabilities. So not only are these concepts of “love” and “relationships” and “sex” and “procreation” completely unheard of ideas to the young cast of characters they’re also actively downtrodden by the powers at be—which serves as a central conflict for these episodes.

How so? Well way back in Episode 7, in the infamous ‘beach episode’ while exploring the ruins of an ancient city Kokoro found a book about human reproduction, something that’s never taught to the Parasites (children) of any of the plantations. Ever since then Kokoro’s been slowly getting more and more enamoured with the idea of having children and so when she finally grows closer to Mitsuru they kiss, they have sex(!) and they decide they want to get married.

Well that escalated quickly! On paper, yes. But in the show it’s very organic and gradual I really appreciated what they did with this plot line—even the wedding episode—which are usually obnoxious affairs (if American sitcoms are anything to go by) is genuinely sweet and heart-warming. Until of course it’s broken up by PAPA’s armed forces and torn asunder by evil brain washing.

And what about the love between Ichigo and Ikuno, they’re both girls aren’t they? Doesn’t that clash with this show’s “heteronormative agenda”—your words, not mine! Ugh, I’m going to regret those words for a long time it seems. Yes, this show has been staggeringly heteronormative to this point, but they address it here too! Ikuno, who’s been not-so-secretly closeted gay since early on finally confesses her feelings to Ichigo and it’s equally sweet as it is heart-breaking! Here’s a girl, whose whole life is surrounded by ‘boy x girl’ partnerships and burgeoning relationships and feelings between hormonal boys and girls, but she feels nothing for the boys, she “only has eyes” for Ichigo.

I’m guessing those feelings aren’t returned? Not as such. But Ichigo is at least sensitive enough to Ikuno’s feelings to not recoil or pull away or even say a negative word against her love confession instead is content to listen and sympathise with her “complicated” feelings.

Hmm, fair enough. So are you happy about that plot line? I’m happy Ikuno’s sexuality was addressed and not either swept under the rug or made to feel invalid, I just hope the shows gives her some decent closure by the end of it and not leave her as some smiling bystander as all the other happy couples get their chance to live their lives as they walk into the sunset…

Speaking of the “other happy couples”, what about our star duo? Hiro and Zero Two. It might be obnoxious to say because they are the ‘main attraction’ as it were, but I really do love watching these two… well be ‘in love’, more than anything Zero Two deserves love and the love Hiro gives her is just so tangible and connected and intimate and special I just can’t even.