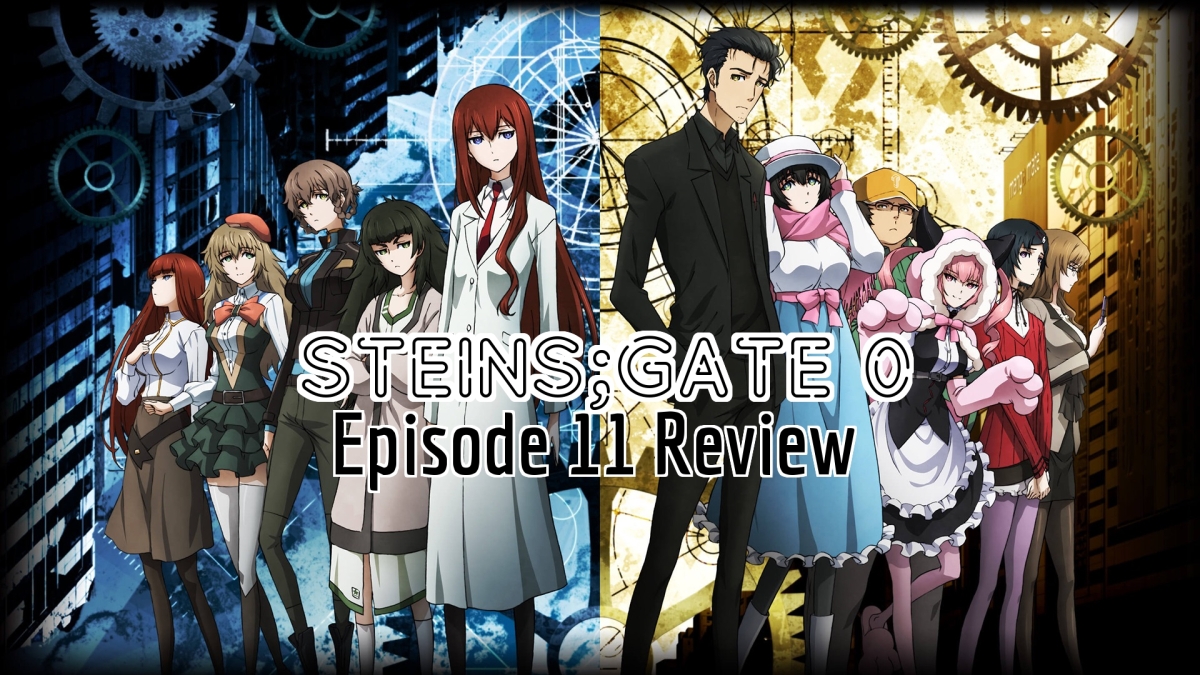 Last week was something of a break from the dour and brooding Steins;Gate 0 and a bit of a return to the tone of the original, was it not? Are we back to moody and dark again this episode? More or less, and I’m very happy for it!

So it’s a good episode then? It’s among my favourite, though admittedly it does have a few glaring lapses in believability early on…

Oh, like what? Well Daru escaping out of his secret lab by vaulting through a window, running across a rooftop and sliding down a drain pipe like he’s in the opening of a James Bond movie was among the most unintentionally hilarious and frustratingly ludicrous things I’ve seen in this whole series. Forget for a minute that Daru is a big boy, even if I just saw Okabe do it I’d be incredulous but for heavy-set Daru it was just beggaring belief.

And you said this is “among your favourite” huh? It can be that and have a scene that strains credibility… crazy, I know!

So what about the episode was actually good then? High tension as Okabe, Maho and Daru are surrounding by gun-toting masked men (and women) intent on retrieving Kurisu’s laptop. That fear that something’s going to happen to precious Maho as a knife is held to her throat then the panic when a second group of gun-toting masked dudes shows up and shoots up the place, injuring a few of them and destroying said laptop in the hail of bullets!

Action packed! And that’s just the first 10 minutes or so! From there things get a bit more contemplative and dare I say intimate… Maho collapses, or rather she looses muscle tension(?—I’m not really sure what was going on to be honest) and so she’s in bed and Okabe’s talking to her and it’s just nice and go on and get married already!

Well that escalated quickly… Sorry, I just really want Maho to be happy and since she can’t be with me then Okabe’s the next best choice!

Right… perfectly normal conversation we’re having here… so I’m still not really getting what about this episode you like so much? It’s the fleeting glances and the tight close-ups on eyes—it’s emphasising so much by showing so little. And holy hell the voice acting performances in this episode is just so god-tier, I can hardly deal with it! I know I’m probably sounding very unprofessional here but I just never wanted this episode to end!

But it does. Indeed it does, there’s a sweet and funny scene at the airport that’s full of complicated emotions as they bid farewell to Maho and Leskinen at Narita Airport (and I’m suddenly inundated with nostalgia from my last Japan trip—as if the Akihabara set-scenes weren’t already doing that to me on a weekly basis!) Amadeus bids farewell to Okabe playing up to the tsun so much that even he calls her out on it. There’s a sense of familiarity and warmth and hope—even though they’re parting, there’s a promise to it all—a promise of a better tomorrow. But there’s still 12 episodes left of this season so while we’ve reached something of a half-way rest stop the road ahead is no doubt full of surprises.