This is mine and Irina’s (from I Drink And Watch Anime!) continuing collaboration on Harukana Receive! If you missed the previous reviews there are links at the bottom of the page!

So it’s time for episode three and finally we get an OP! And it’s kinda just okay… I guess my expectations were too high! Honestly to OP is pretty lame. It’s just kinda boring and the music is very generic. They’re not even taking advantage of the cute girl character designs. It does highlight that pretty colour palette but that’s about it.

I saw one of your tweets about this episode before I even watched the episode and I got to be honest I kinda had it in my mind the whole time I was watching it. Oooopppss. In case you guys didn’t see it, it said:

“#harukana_receive  might be improved if they took out the volleyball scenes”

I know you weren’t a fan of the whole slo-mo sports action in the first episodes (or maybe just in general) but I thought it was fine… not just that I thought they mixed it up enough, sure it was ~mostly~ in slow motion but I think that kind of fit the tone they were going for in this episode–it wasn’t meant to be an intense match but rather a more introspective experience with Kanata learning to find herself and whatever her play style is supposed to be going forward. Matt’s just wrong guys. The animation during games is atrocious. You know what would make this show better…if they were swimsuit models or something. They had to pose in bikinis on pretty beaches. Now that would play to the production’s strengths. Heck, they could still be volleyball players but the practicing and the matches happen offscreen.

Maybe one of them got into a car accident and is in a wheelchair now and they need money for an operation so they’re putting together a charity swimsuit calendar. Bam! Now you have a super consistent plot reason for the melodrama, the variety of skimpy bikinis, the posing and the girls constantly adjusting each others’… bikinis.

We’re introduced to two new girls, foreign exchange students Claire and Emily Thomas from somewhere… (don’t know if they’re British, American or maybe even Australian?) and almost immediately I liked these girls a lot. They’ve got a lot of personality and they’re just a lot of fun! They’re blonde and one’s rowdy. The reminded me of a couple of sisters I knew in college that would compete to see how many drinks they could get some poor dude to buy them in an evening. I think they both have kids now. I have no feelings for these characters.

This episode kinda felt more like a slice of life, cute girls doing cute things show–especially the first half so obviously I was loving every minute of that. 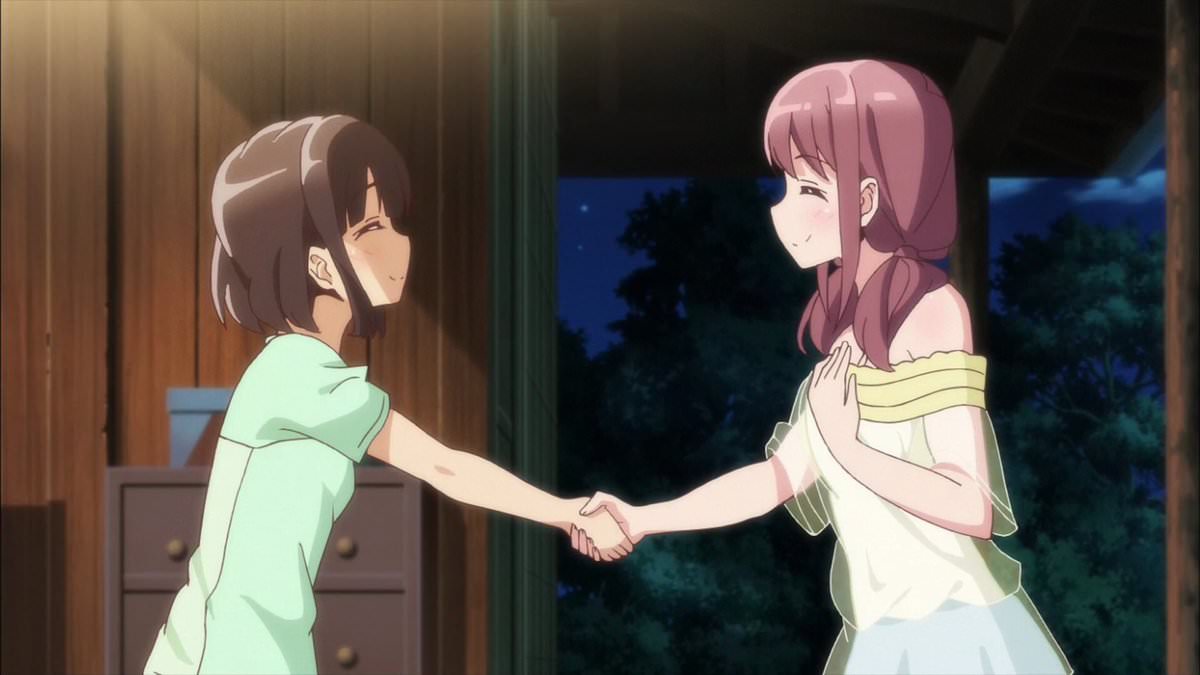 That flashback to Kanata and Narumi versing Claire and Emily in grade school was interesting… if only because for some reason Claire and Emily were rocking C-cups, not sure the writer of this series knows how puberty works. I’ll give the writer’s a pass. Lot’s of girls develop early and they weren’t overtly sexualizing the 7 year olds so that was fine.

Also that other flashback to Kanata and Narumi becoming friends was nice–though it makes me feel especially bad for Narumi, they were so close and now they’re basically bitter rivals (well as close as a show like this will have two girls be bitter rivals, which is to say hardly at all). I thought it was cute but the drama still feels ridiculously exaggerated. Maybe it’s on purpose. It’s a parody and it’s supposed to be ridiculous and funny. In which case I’m interested to see where it goes.

Overall I was happy with this episode. What about you? It seems more of the same. A continuation of episode 2 with new charas. I didn’t see anything new this week. I think they may still be building towards something but I have a feeling 12 episodes may not be enough. We’ll see. If we go with the moe/ecchi sports subgenre this one is my least favorite. I really liked ping pong girls and preferred the horsies. I also thought Yuru Camp was a better show but I like this one better because camping is extremely boring to me. Keijo is still the best sports anime FYI. *runs away into the woods* I haven’t seen it but a lot of people like it. It looks funny. At least it’s not pretending to be something it’s not which is nice.

And that’s episode 3, join us for the next episode on Irina’s blog next week!