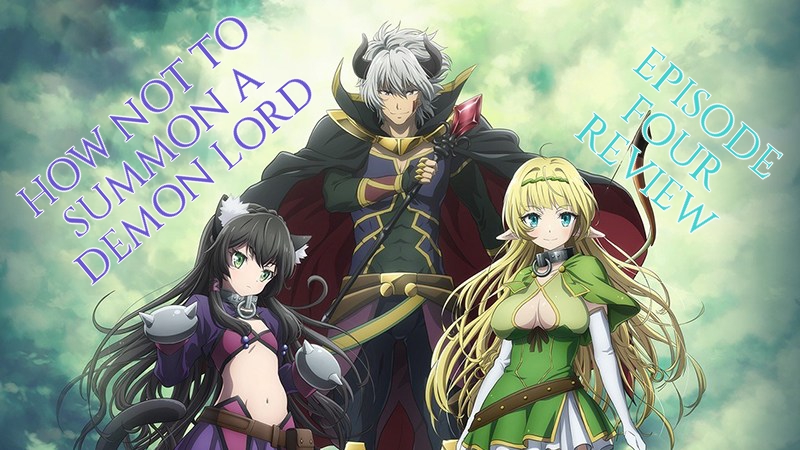 What’s the show? How NOT To Summon A Demon Lord, Episode 4.

And on a scale of 1-10 how perverted is the episode? Why’s that always the first thing on your mind when I review an episode of a show like this?

Let’s face it, that’s what a lot of people who are following these reviews will be wondering… especially after that first episode. Fine. For the majortiy, like 95% of this episode it’s a 2 out of 10 in terms of fan-service, but the final minutes kick it into high-gear for an 8 out of 10. Happy now?

I don’t know, is the ‘majority’ of the episode good content? It’s very good content–probably my favourite episode thus far. Not only do we get a true sense of the sheer scale of Diablo’s “Grand Magic” as he unleashes ‘White Nova’ on Edelgard and her army of swol furries. And honestly it’s a stupidly cool moment, not only is the spell itself impressive from the low-key casting to its atomic-like unleashing but also the aftermath as it not only obliterates the bridge and the water beneath it leaving a scorched crater but then the remaining water from either side of the river rushes back into the chasm. It’s hard to put it effectively into words how cool of a moment it is but trust me it is impressive.

I’ll take your word for it. So what about Rem, wasn’t she in danger of being attacked by a Fallen who’d snuck into the city gates at the end of last episode? Yes, she and Celestine barely escape, running into an alleyway only to be cornered by the great beast Gregore. Rem tries a powerful summon to fight against it but Gregore KO’s it in one hit. Then Emile Bichel Berger from the previous episode shows up to defend the women’s honour and fights admirably–despite being wholly outmatched, and I mean kudos to this show they made an annoying comic-relief character fully redeemed by standing fast against an over-powered foe. They did however do something I kinda wish they hadn’t, but I think they pulled it off well-enough that it’s not as bad as it may have been.

What’s that? Well I was kinda hoping that Rem would be able to hold her own against Gregore and prove herself capable, without having Diablo have to save her. But… Diablo has to save her, though to be fair he’s saving everyone. And it makes sense that neither she nor anyone else could defeat Gregore… in the previous episode Diablo’s inner-monolgue establishes that The Fallen are boss level monsters, and we already know Rem’s level is around 30 so it would have been unrealistic (but cool) if she had been able to take Gregore down.

So Diablo comes in to rescue everyone, I take it he isn’t able to use a spell as destructive as he did previously since it’s in close quarters? Indeed, and even though this is the second ‘fight’ of the episode it’s still a visually impressive encounter as Diablo uses a spell called ‘Dark Press’ against Gregore which manipulates gravity–then follows it up with Naraku a spell that creates a black-hole which consumes the opponent, sending them to a prison of darkness for all eternity.

That’s pretty metal. Yep, remember Diablo is a Demon Lord, so a lot of his spells are evil. But he’s on the side of good here, which is something people (like Celestina) are slowly beginning to realise. It’s also something that awes and inspires Rem and Shera, as they find themselves being drawn in by his unlimited power–unfortunately for Diablo himself, these high-level spells are taking a toll on his body as he’s exhausted to the point of fainting.

So he’s not all-powerful after all, huh? Indeed. And Diablo’s realising this world is a lot more ~real~ than he first assumed, people die and they stay dead, and people grieve for their fallen dead. This is a world that has stakes, even for a Demon Lord such as he.

Interesting. So uh… dare I ask about the fan-service? It’s pretty standard stuff, while Diablo is recovering in bed–it’s taken 10 days(!) for him to recover his magic power but he’s still feeling languid. At which point Shera comes in and straddles him, wearing a particularly revealing outfit–then Rem comes in and protests this sign of affection and shenanigans ensue. But it’s not all shenanigans for the sake of shenanigans as the guild-leader Sylvie comes in with a quest, stop an impending war between the humans and the Elven kingdom who’ve come to bring Shera home!

So in a nut-shell? I am particularly fond of how organically this show is expanding its universe and connecting parts that have been brought-up. Unlike a show like Konosuba where the world-outside never really felt connected to its characters (and that’s fair as it’s a comedy first) here all the characters feel important to the narrative in one way or another and it’s never immediately clear how it’s going to resolve, which is exciting! This is a great episode and I look forward to seeing how this story continues!

Previous How NOT To Summon A Demon Lord Reviews:

Is It Wrong To Suck A Cat Girl’s Ear In Another World? – Episode 1 Review
The Grope Debate – Episode 2 Review
Listening Is A Heroic Trait Too – Episode 3 Review