Angels, Demons And Minimum Wage – An Anime QandA Review of ‘Dropkick On My Devil’ Episode 5 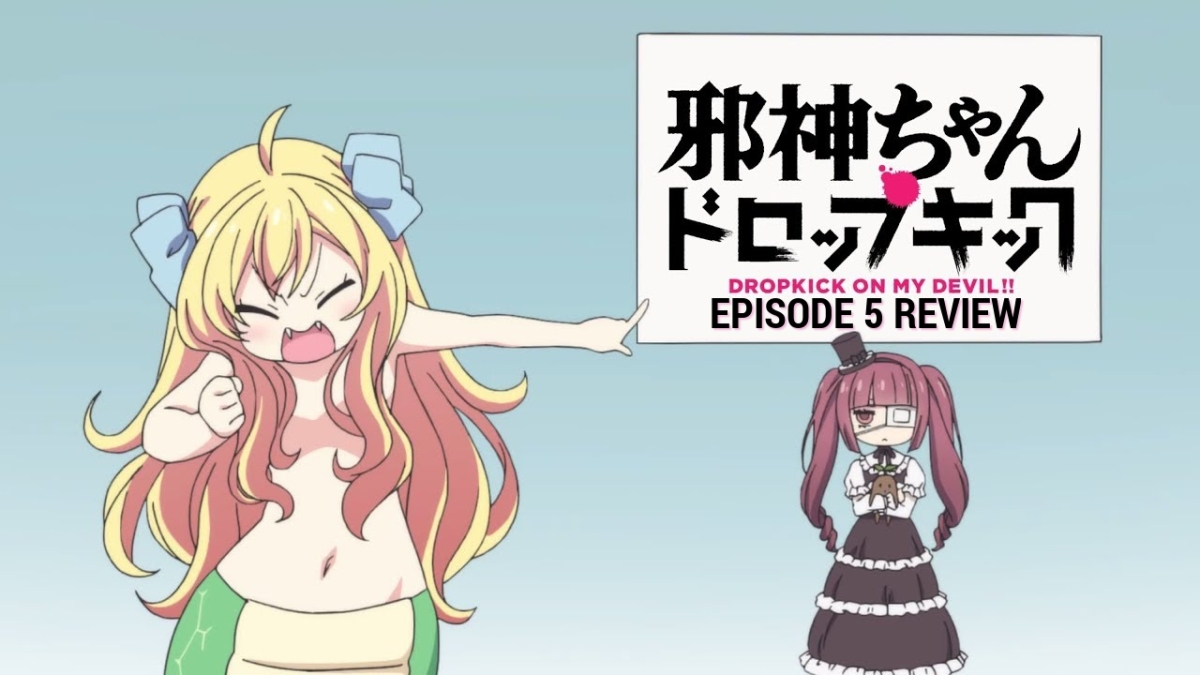 What’s the show? Dropkick On My Devil!, Episode 5.

So, back at episode 3 you were almost ready to drop this show, episode 4 came and you were singing its praises again, what does episode 5 do for you? It does a lot, not the least realise how kind of unique this show is—at least in comparison to its contemporaries.

Right… and that means specifically? This show is unexpectedly funny in unexpected ways and despite the central premise being nothing but an elongated episode of ‘Itchy & Scratchy’-style violent shenanigans the side characters once again steal the show, to the point where I’m wondering if there’s any point to our protagonists anymore…

So the side characters shine here, who are we talking about specifically? Well obviously our down-and-out fallen angel Pekola, this episode sees her moved into a sort of homeless-cardboard shanty-town that was at least passingly reminiscent of Anzu’s homeless times in last seasons’ Hinamatsuri. Obviously Jashin-Chan shows up to be just a general c-word and gets her comeuppances from Yurine in a satisfying fashion. Indeed, the more Pekola shows up the more I’m convinced she’s the unsung underdog hero of this show much like Anzu was in Hinamatsuri—the parallels just keep drawing themselves!

That’s great and all, but what about the other side characters? We finally get a decent bit of Minos ‘action’, I love her character-design far too much for my own good and I like that she doesn’t take any shit from Jashin-Chan despite apparently being one of her “friends”. Then there’s the crazy cop Mei Tachibana we met last episode, who patrols the streets of Akiba—does an absolutely awful job of it (I remember being confronted by a woman selling “art prints” last time I was in Akihabara too, luckily I’m not an idiot). See, Mei is into collecting ~things~ at first I thought it was cute things but the fact she has, amongst her collection, totem poles and bus-stop signs means she’s probably just insane and I loved every minute she was on-screen!

That’s good to hear— Speaking of insane, we get to see poor little Pekola at her below-minimum wage factory job and I don’t know what it was but this whole sequence was a delight to behold, from the infuriatingly inefficient work tasks, to her wholly terrifying and delusional co-workers I could really relate to her struggles—more so than the usual ‘homeless’ oriented ones.

Sounds like Pekola’s won a spot in your heart. I wasn’t even that enamoured with her as a character, she’s kind of annoyingly pious—which I hate—but her “journey” is undoubtedly the most compelling out of all the characters and that includes our two protagonists who feature—but not nearly as prominently as Pekola and Mei.

Does this mean you’re sticking with the show for the long-haul? I don’t know, I still kinda loathe every second Jashin-Chan is on screen, to the point where I want to turn the show off. And while seeing her get brutally tortured by Yurine offers some sadistic relief it’s not nearly enough to make their parts of the anime enjoyable. But at the same time the side characters are so well integrated and so much better and interesting characters that it’s worth suffering through violent mediocrity to get to those parts.

Previous Dropkick On My Devil! Reviews:

One thought on “Angels, Demons And Minimum Wage – ‘Dropkick On My Devil!’ Episode 5 Review”