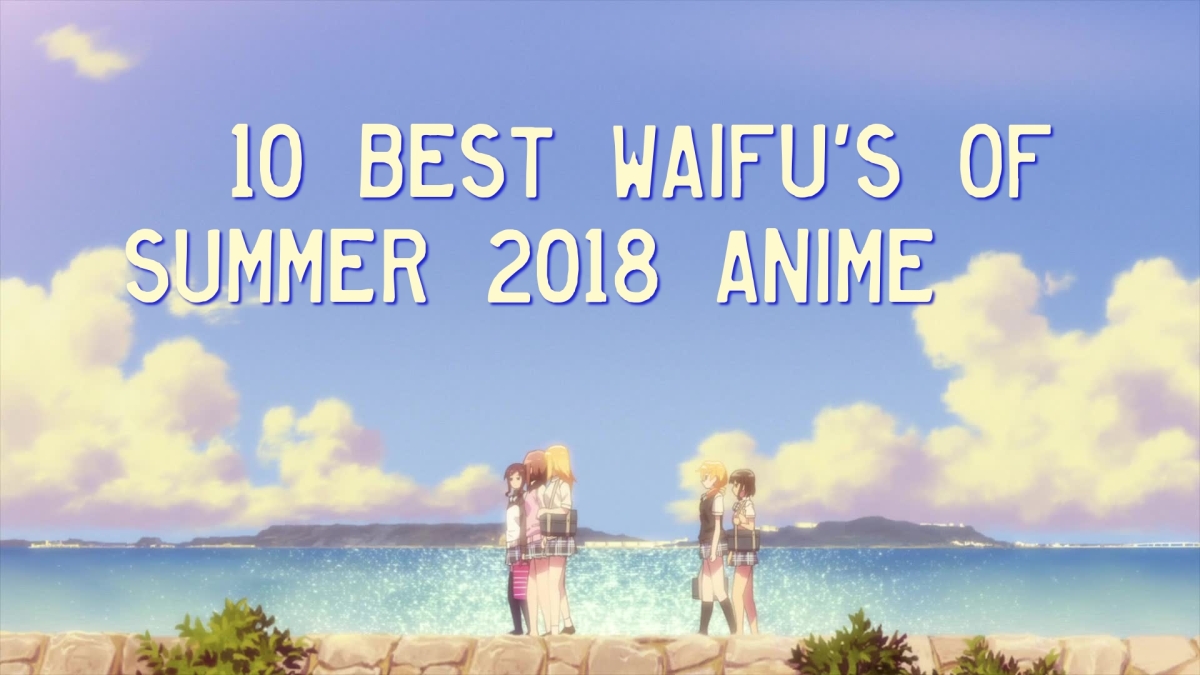 The business of waifus is serious business and none take it more seriously than me (probably, not really). This list, as like previous ones, counts down my favourite anime waifu’s of the Summer 2018 season. There’s a few rules for this list though, first these girls don’t have to be from the main cast but they do at least have to have enough screen-time to make a well-formed decision on whether they are waifu material. Second, my criteria for a ‘best girl’ can change depending on the girl and the show, but I’ll go into the specifics in the accompanying description for each girl. Third and most importantly, the quality of the show has no barring whatsoever on the quality of the waifu, because even the worst shows can best girls. Also something to note, unlike my music-related lists, these are not comprehensive lists and I strictly cover shows I watched within the particular season. Now onto the girls who make up my 10 Best Waifu’s of Summer 2018 Anime!

Much like Uma Musume last season this “sports” anime filled with attractive girls is actually the last place I’d look for a waifu. Emily is best girl because despite all the sports going on around her she actually ~feels~ like a character I could get to know, you know on a ‘personal’ level? I’ll shut up now…

~Number 9~
Minos – Dropkick On My Devil!

Ever since the first episode I was besotted with Minos, despite her having barely a line of dialogue per episode. Finally in episode 9 she was bequeathed some development (and bath scenes) and she’s exactly as awesome as I presumed. Got milk?

What’s there to say what hasn’t been said before? She tries her best and she’s absolutely adorable the whole time! Also she’s a blood cell–anyone else find this weird that I want to marry a blood cell?! FFS anime.. this is what you do to me!

Unabashedly Chio is a nerd, a card carrying, two middle fingers up to the world NERD. And that’s what I love about her… she’s also kinda a pervert and kinda got a few screws loose but that just ~adds~ to the allure, you know what I mean? I think I have some issues…

It’s more than just the Fran Drescher hair (does that reference show my age?)… it’s more than just the ‘lethal loli’ trope, Sara is one of a kind… she is to put it a better way, a force unto the world and all who encounter her wake. She’s also, like, amazingly cute… but that’s hardly anything new considering the nature of this list.

I’ve gone over this a few times in my reviews of this show but Sato finally makes me understand the appeal of serial killers, at least in fiction. I don’t care if I’ll probably end up dead, I want to look into those crazy eyes every morning ’til I breathe my last breath… probably at her hands too but what can you do?!

There’s something so honest and pure and sweet about Yuuna that makes my heart just melt and even though she’s a ghost bound to earth because of her unfinished business she always tries to make the best out of a situation and is always putting the needs of others ahead of her own. But also, dat body.

~Number 3~
Rem – How NOT To Summon A Demon Lord

Cat ears and a tail, not really my thing. But Rem is a whole package kind of girl, it’s everything about her combined that makes her special, that steely determination in face of insurmountable obstacles, her timid personality and the fact that she doesn’t suffer fools gladly. And that smile, rare as it may be is warm enough to stoke a firepit. #flatisjustice

While some girls on this list are easy to peg down the ~exact~ reasons why I like them so much, Rinne–much like the show she comes from is a bit of a mystery. She’s absolutely adorable but so is Sara (and Karen for that matter) so it’s got to be something else… or maybe, much like love itself some things aren’t easy to find logical explanations for.

As if I’d not include this seasons arguably most adorable things. But you know seeing as there’s multiple of them, they don’t have a distinctive personality other than “kawaii” and the fact half of them are (presumably) male kinda~ means they’re ineligible to be on this list. Also, the Platelet’s are strictly to be ‘protected’, please don’t lewd our Platelet’s!

~Number 1~
Shera Greenwood – How NOT To Summon A Demon Lord

If Rem is a whole package kinda girl where the sum is greater than the parts then Shera is the opposite that is to say every single part is flawless. And no I’m not just talking about her boobs! Shera is kind-hearted, loyal and passionate about her friends who mean more to her than anything else, her voice is also just about the cutest thing in the world, the way she says ‘Diablo-san’ just makes my heart melt. Also, BOOBS. Ahem…

And that’s the list! This was a lot more difficult than previous seasons, originally my list was around 25 girls so a lot of tough choices were made on the road down to picking just 10–apparently Summer is the time for waifu’s! Thanks for reading, I hope you enjoyed and be sure to leave a comment below with your favourite waifu’s of the Summer 2018 anime season!