Hello everyone! So, in case it wasn’t abundantly clear by my sheer existence I love Japan–the country, it’s people, it’s food and especially the anime/otaku culture! In October and November of 2017 myself and the irlwaifu visited Japan for 21 days and ~roughly~ documented our travels through photography and daily instagram posts. Why is this important? Well because in February of 2019 we’ll be heading back to Japan for 21 days again and in anticipation of that upcoming trip I thought it’d be fun to share some travel stories and photos from the previous trip–sort of like a countdown to the next trip in blog form! I didn’t take ~nearly~ as many photos as I should have but that’s a lesson learned for next time! From here on out the rest of these posts will be styled in my QandA style, enjoy!

So uh, what’s all this then? Didn’t you read the blurb above?

Blurb? More like wall of text, give me the bullet points, man! Going on a trip to Japan in 2019, thought I’d share some pictures and anecdotes of my trip from 2017.

Oh great, so basically you’re subjecting me to a slide show of your travel photos… how exciting. Shut it!

Fine, so let’s get this over with, where do we begin? Well of course we begin how any trip begins, with a way too early alarm. (Actually that’s not strictly true, our flight for the 2019 trip leaves at Midnight so no early alarms for that one!) Why did I take a photo of my alarm time? Well because my usual daily wake-up time is around 10:00am so this was particularly painful!

And who did you fly with? Qantas, which was my first time flying with them in like 15 years, and they’re very good. All you can drink alcohol included in the price of an Economy seat? Win!

And the arrival? Yes, we arrived at Narita Airport quite late, some time after dark and because Narita Airport is like over an hour from Tokyo itself and we didn’t want to bother with that much extra travel that late at night we stayed in a hotel one train stop from the airport. It was the APA Hotel Keisei Narita Ekimae and for those of you who don’t know the APA Hotel Chain is basically a 3-star business hotel with small rooms with massive beds that take up almost the entire room. They’re always extremely well maintained and very new-looking and are a personal favourite for the price to quality ratio. Me and the irlwaifu got lost for about 15 minutes trying to find the hotel from the train station, something of a tradition apparently as the same thing happened on our first ever trip to Japan in 2015!

Let me guess, you were leading the way? Well, uh, yeah! Of course my male ego presumed to know the way from having glanced at a Google map once the night before!

Tsk tsk… Anyway, the hotel itself had a Lawson’s convenience store attached and for those who aren’t aware Japanese convenience store food is such high quality and so cheap too! Also, fair warning a lot of these posts will contain pictures of food because as mentioned in the prologue I ~adore~ Japanese cuisine.

So that was the first night in Japan, any jet lag? No, but Japan despite being a 10 hour flight from Australia is only an hour behind in timezones, so that’s a big win, never yet have I had to experience the dreaded ‘lag’. Anyway, next morning and here’s a picture of the view from the hotel, nothing terribly interesting but a room with a view is always better than none (we’ll get to that in a minute).

So this is what you’re calling Day 2 now, yeah? From here onto the first destination I presume? Well, not before some obligatory Japanese TV weirdness.

Why do I have a feeling this won’t be the last time I see a picture of something weird you saw on TV… Heh… So afterwards we headed to Tokyo, having to change trains at Ueno which–again–thanks to my flawless directions and map-reading skills got us lost for a minute or 30, but we did at least have some fine food at an eatery near the station! (I promise next time to actually take notes of the names of these places for those interested).

So after Ueno you headed to…? Why, only the greatest place on Earth… Akihabara! I didn’t take any daytime photos on this day but don’t worry there’s some nice night time photos, also we stayed in Akihabara for 8 days! So you’ll see plenty of daytime pictures in later blogs. Anyway, the hotel–the Akihabara Washington Hotel was kinda disappointing and it wasn’t so much the room but the view–or lack thereof. I wish I’d taken a photo but basically we had an interior facing room which meant our view was of a dimly lit emergency escape staircase and a dripping pipe… Anyway after a brief rest we ventured into some Akiba anime stores and so began a trend of me posing in front of “inappropriate” wall art.

I was wondering how long and til you posted something lewd and anime, not long as it turns out! Oh trust me, it only gets worse (better!) from here!

I shudder at the thought… so next I presume is dinner? Correct! We found a hot pot place on the seventh floor of one of these anime buildings, if I remember correctly the irlwaifu found a cheap K-On! Nendoroid figure in a second-hand store on the fifth floor. Anyway, I’d say this was the only ~awkward~ dining experience we had at least in relation to the language barrier. We ordered easy enough by pointing at the menu, and the food was delicious, but little did we know that the particular set-menu we ordered required multiple steps that required one of us summoning the waiter to do additional steps (basically to add rice to the hot pot liquid after the ‘main’ course to turn the “soup” into “risotto”) and so we waited for over an hour presuming they’d get to use eventually and they never did. So we just awkwardly paid and left. 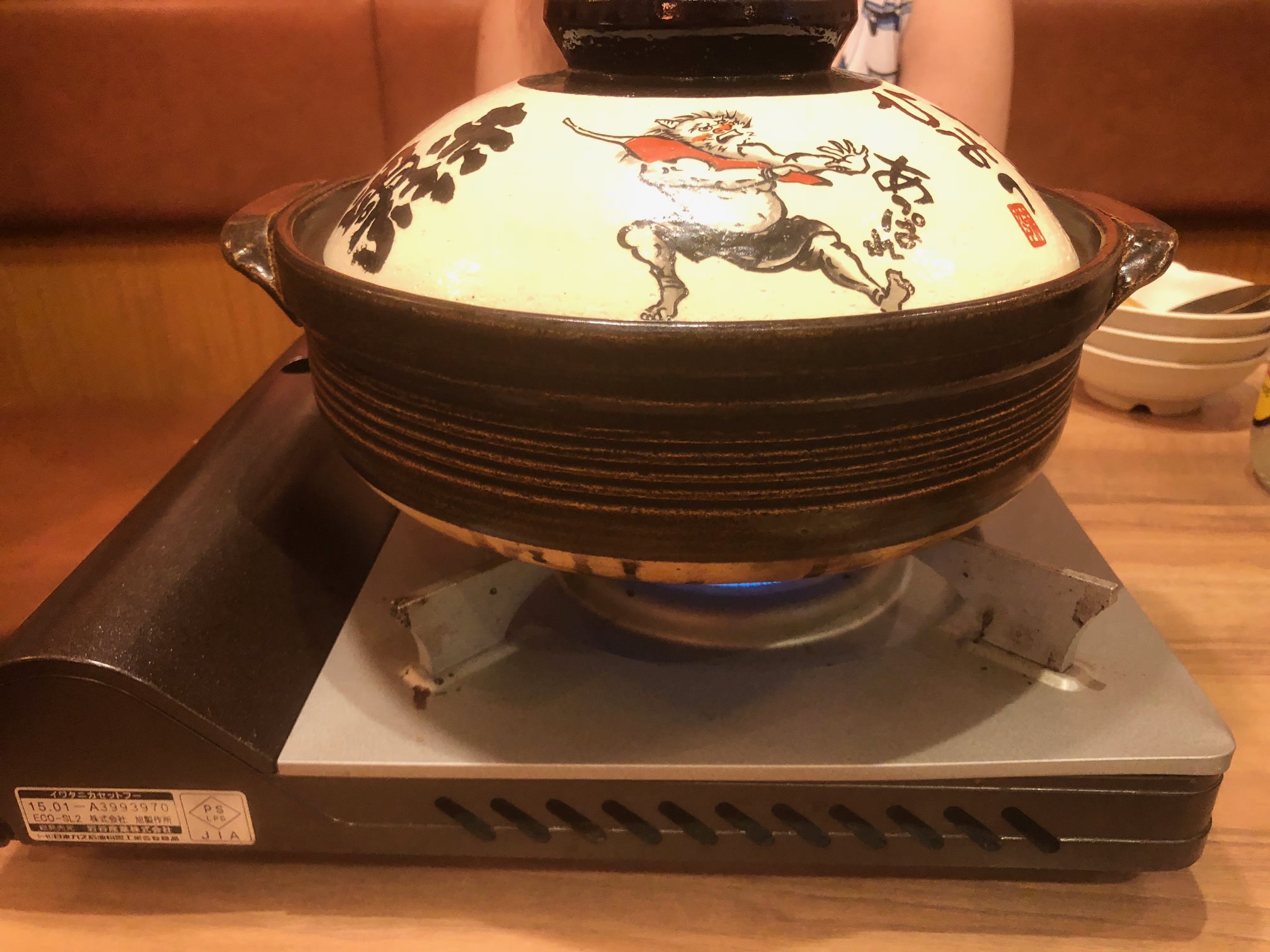 Ah, the old ‘language barrier’ issues. Indeed, thankfully they were limited this trip! So on our way back to the hotel, walking down the main street of Akihabara we came across a woman advertising an owl cafe, with a real life owl accompanying! It was very cute, but, well, not to be too much of a wet blanket but I’m not really a fan of animal cafes that use ‘undomesticated’ species’ as the attractions. Cat Cafe? Fine, they probably don’t care anyway. But owls? Well that’s open to debate.

Anything else before we wrap up your second day in Japan? Just this beautiful shot of Akihabara by night. Man, I love this city so much.

Stay tuned for Day 3 of Japan Trip 2017 where we participate in a guided trip around Akiba with a maid as our tour guide, we find halloween Colonel Sanders, I buy panties from a machine and we visit a genuine maid cafe!