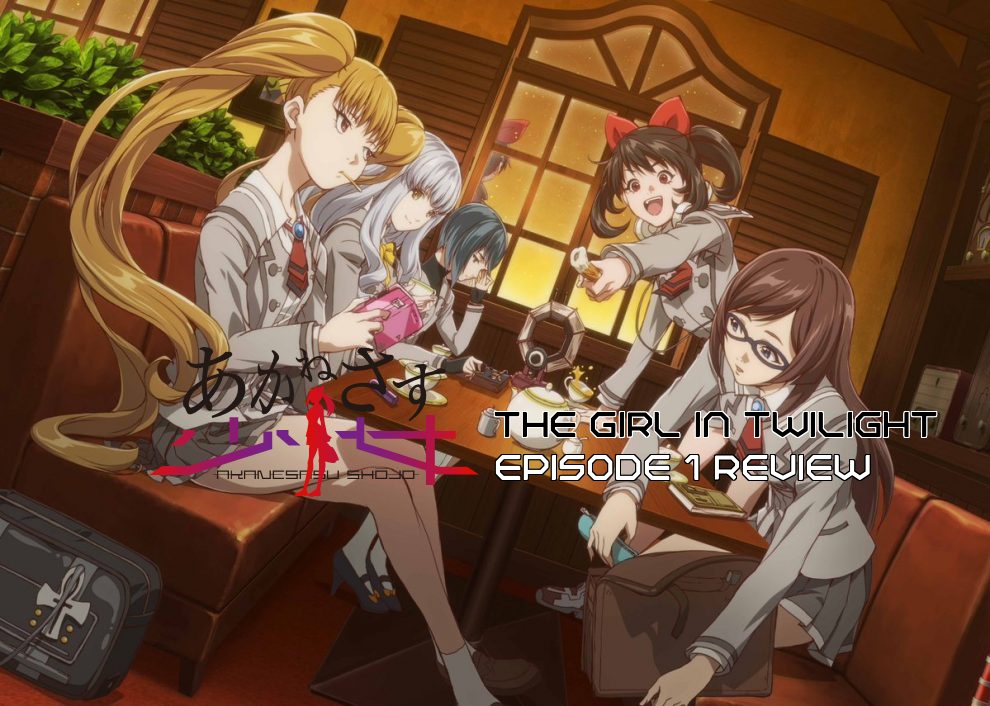 What’s the show? The Girl In Twilight (Akanesasu Shōjo), Episode 1.

‘The Girl In Twilight’ huh? Isn’t that Kristen Stewart? Wow, quality dad joke there… No, this anime has nothing to do with ‘Twilight’ or anything like it, damn it!

Fine, what’s it about then? Cute girls doing cryptic things.

Okay, that’s the short version what’s the ~slightly~ longer version? Well it’s about five high-school girls, Asuka, Yu, Mia, Nana and Chloe who all partake in a vaguely bizarre ritual to do with radio frequencies and cassette players and it’s all in the name of summoning ‘another world’.

Wait, how does one “summon another world”, don’t you usually travel to one? Well I don’t know but eventually they do find the right frequency thanks to a magic crystal and another plane of existence sort of ~appears~ around them. They are immediately beset upon by weird looking yellow bunny floofs who after provoked turn evil. It’s then when our main girl Asuka sees another girl who looks remarkably like her come forward to save them from the floofs who’ve transformed into giant snakes, a technically impressive 3D CGI battle takes place and the Asuka doppelganger is triumphant! She scolds them all for being in “this world” and sends them back, but before she can return herself passes out. Asuka being the nice girl that she is brings her back to her parents place to rest up.

‘Kay that seems like a fair amount for a first episode— We’re not finished yet! After dinner and a bath Asuka gives her doppelganger the bed for the night and we learn that both Asuka’s have lost someone important—the same someone (presumably a little brother based on the photo and brief flashback we see). Doppel-Asuka leaves for her world early in the morning, but has accidentally left behind her locket that contains said information about lost-presumed-sibling.

So that’s the plot of the episode, but is it any good, did you like it? I’ve always regretted not blogging week-to-week about ‘A Place Further Than The Universe’ when it aired in Winter of this year, because from the very first episode I knew it was something special. I’m not trying to retroactively gain praise for having noticed something early than most did about the aforementioned show but I’m ~kind of~ getting that feeling about this show and I’m not even sure why, except here it’s just to a more specific extent.

Okay and what’s all that supposed to mean? It means I think this is going to be one of the highlights of the Summer season and I’m calling it already but I also think it’s going to be a show that ~feels~ a bit to precocious for its own good for some. Like these are some quirky girls, and it’s all very deliberate, like we’ve got the aloof and quirky dreamer with a bit of a sad past, we’ve got the boy-crazy one, we’ve got the one who throws random French phrases in, we’ve got the old-school radio geek, we’ve got the more grumpy and skeptical one. Plus there’s things like Asuka’s fondness for Chikua snacks and the fact she can bribe her teacher with Miso flavoured soft-boiled eggs that her family makes to get out of trouble. It’s all stuff that’s thrown at you very quickly and very deliberately to endear you to these girls. And you know what? It absolutely works for me, I’m already down for more adventures in ‘dimension hopping’ or whatever it is they’re doing…

Does that mean you think it has the potential to be ~as good~ as ‘A Place Further Than The Universe’ since you made the comparison? It’ll be hard, but it’s possible! Also it kind of reminded me of ‘Caligula’ anime in bits too and, well, that’s less of a good comparison so hopefully it doesn’t end up like that show…

So I’ll count this as a recommendation then? If you like your cute anime high-school girls with a heaping side of action, mystery and ~dubious~ science then you’ll probably find something to like here! I thought it was a really fun, well-written and fast-paced first episode that promises a lot while keeping a bunch of unanswered questions and room to grow!