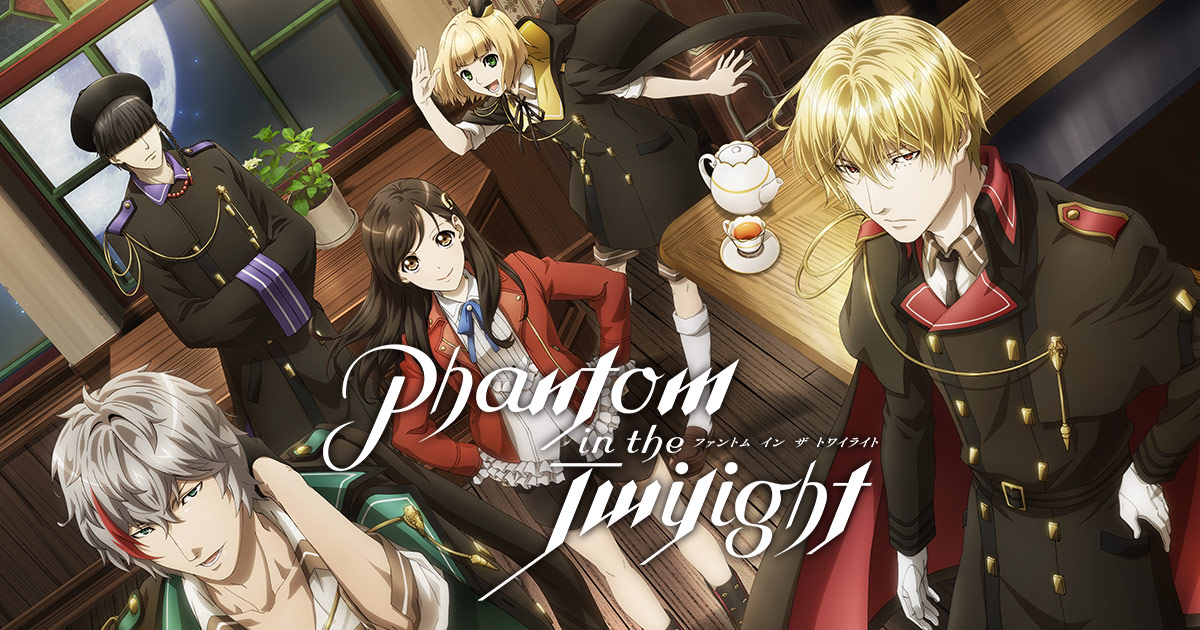 What’s the important information? Phantom in the Twilight is a Summer 2018 action/supernatural anime that aired 12 episodes from July through September. It is an original anime project produced by Happy Elements and is a Chinese co-production.

What’s it about? Ton Baileu and Shinyao Mu are two Chinese exchange students and best friends who’ve moved to London to attend university, immediately they are swept up in supernatural shenanigans as Shinyao is kidnapped by ~bad guys~. Ton finds help from an unexpected source, Umbra who are non-human creatures created out of the public’s collected consciousness on fantasy and supernatural beings. The four umbra who help her are Vlad, Luke, Toryu and Wayne—who run the ‘Café Forbidden’.

Why did you watch it? While Kakuriyo was Spring’s anime for the irlwaifu, this was Summer’s, though it was arguably less directed to a female audience than the poster and synopsis suggested.

Did you enjoy the show? I enjoyed it for what it was, I was glad the series never took itself too seriously—in fact it was at it’s best when it was leaning into the almost over-the-top Supernatural-esque shenanigans. The narrative itself—while adequate never pushed itself to be more compelling or unique and some of the characters felt underdeveloped at times. The best way to sum up the show is that it was fun—but hardly ground-breaking or innovative.

What was your favourite episode? Episode 11 felt the most over-the-top and silly and contained one of my favourite lines in the entire series. The four Umbra and Ton are speeding toward where the bad guy’s were and they’re in a speed-boat going along the river Thames, Luke comments why they decided to go by speed-boat rather than pick something more subtle and Vlad replies “doesn’t it make sense to take the most picturesque approach?” Which kind of tells you everything you need to know about how serious this show takes itself at times.

What were your most favourite things about the show? I thought it was interesting that the Umbra manifest from people’s ideas about what monsters are, so Vlad is ~literally~ Dracula from Bram Stoker’s book. They’re also all immortal as long as they still have presence in the collective consciousness, which is an interesting way of getting around ideas like extended lifespans and not dying in battles. I also enjoyed the post credits ‘Phantom Plus’ segments which had Chibi versions of the characters addressing the audience and cracking jokes and references about the episode. Sometimes these kinds of segments can feel tacked-on and sometimes cringe-worthy but here they were legitimately funny and something I looked forward to each week!

What were your least favourite things about the show? Ton’s great-grandmother is often mentioned as she was a famous Umbra Hunter 100 years ago, she also opened ‘Café Forbidden’ and had some sort of relationship with Vlad. But I never really felt like anything was gained from having her character mentioned and found her a bit pointless to the story overall. Also it’s worth mentioning that Ton’s friend Shinyao spends 90% of the series kidnapped, which isn’t a great storytelling device and kind of gets ridiculous (but in a not-fun way), but at least Ton’s a strong enough female character to balance it out.

Who was your favourite character? It’s probably obvious but I think Ton was the sole reason I kept watching this show, from the very beginning I loved her energy and attitude and charisma and found her to be a compelling lead with both physical and mental strength.

Thoughts on the OP (opening) and ED (ending) and the soundtrack in general? The OP was “Flowery Song” by Jiro Wang and despite the title this wasn’t a delicate track, it was in fact a pretty strong and energetic soft rock song that I never got tired of. The ED on the other hand “HOME” by May’n, while competent and technically fine was a ~bit~ too sleepy for my liking.

What’s something unique about this show? Probably the most unique thing was the aforementioned plot point of Umbra being tied to the public’s perception of a typical “monster”. Other than that it wasn’t particularly unique in any respects—although watching Toryu ready for battles by pulling a full sized Gatling gun from out of his sleeves was endlessly amusing.

What other anime are most like it for the sake of comparison? I hate not having an answer for this segment but because this is a genre of show I don’t usually watch I don’t have a basis for comparison! It shares some similar elements with Butlers x Battlers (which I watched last season), but comparing anything to that show seems mean.

Who would you recommend it to? While it wasn’t my favourite series of the Summer, in-fact it was pretty low compared to everything else I watched, I could probably recommend it to anyone who likes a bit of Supernatural-inspired action, handsome monster boys and a strong female lead. But only if you’re really bored and have nothing better to watch.

Sum up the season in one sentence: ‘The epitome of “pretty good”, it didn’t do anything dreadfully wrong but nor did it do anything particular noteworthy.’

8 thoughts on “Phantom in the Twilight – Full Season QandA Rundown”