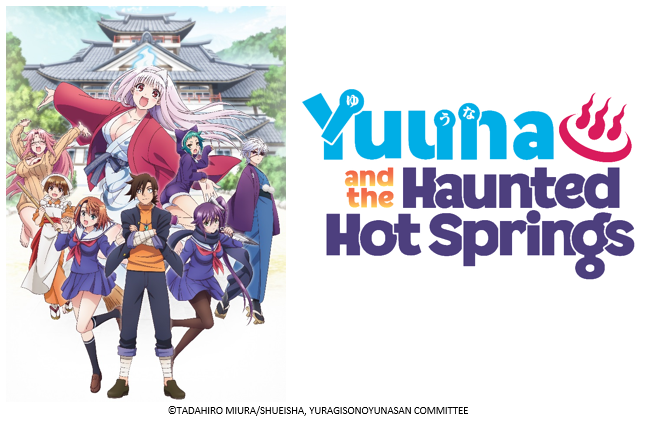 What’s the important information? Yuuna and the Haunted Hot Springs is a Summer 2018 harem/ecchi/comedy anime that aired 12 episodes from July to September. It is based on an ongoing shonen manga series by Tadahiro Miura.

What’s it about? Kogarashi Fuyuzora is a spirit medium who has lived a luckless life, frequently possessed by spirits and constantly homeless because of it, he finds himself at the doors of Yuragi Inn, a suspiciously cheap boarding house and former hot springs. The reason for the affordable accommodation is because it is haunted by the ghost of a high school girl named Yuuna. Immediately sensing a connection both physical and spiritual between himself and the girl he endeavours to find out Yuuna’s “lingering regret” that keeps her from moving on to heaven while also encountering the other ~supernatural~ secrets of the other female tenants of the inn.

Why did you watch it? Aside from the fact that I’d read some of the manga before the series started it’s also an ecchi heavy harem series that is filled with beautiful anime girls who happen to tick off so many boxes both visually and characteristically. Of course I didn’t hesitate to watch this show!

Did you enjoy the show? I adored this series—while there’s plenty of things to nit-pick on the presentation side of things it’s easily overlooked for just how much fun this series is.

What was your favourite episode? It’s hard to pick because of every episode—regardless of the actual ‘plot’ of the individual episode—contributes at least a little to the overall story and characterisation while also endearing us to one or more of the characters in a substantial way. The episode that perhaps balanced the fan-service and the wholesomeness that this show became noteworthy for is Episode 9, “Chisaki of the Yuragi Inn” which puts Kogarashi amidst a cavalcade of harem shenanigans and yet has him acting gentlemanly and respectful throughout despite the ludicrous temptations thrown at him!

What were your most favourite things about the show? Kogarashi is the most ~feminist~ a harem protagonist I’ve ever come across and I don’t use that word lightly as it’s practically unheard of that “harem” and “feminist” are combined favourably in a sentence. Never once does he underestimate or speak down to any of the women in Yuragi Inn, never once does he objectify or sexualise them. Sure he ends up getting involved in ~shenanigans~ but they’re never caused by his conscious efforts but as the results of genuine accidents or misunderstandings.

What were your least favourite things about the show? This show will be infinitely better on blu-ray. Gimme them uncensored shenanigans already!

Who was your favourite character? Yuuna is a beacon of wholesomeness and innocence despite the ~shenanigans~ her sleep spreading gets her into with Kogarashi. She’s endearing and sweet but with a depth that’s rare for a character like her (amnesiac ghosts have seldom seen so fully realised). Sagiri comes so close a second that I’m tempted to call it a tie, but while this yandere has a ton of body-issues that are absolutely unfound of, not to mention all the other insecurities that come with being a feminine ninja her connection to Kogarashi and therefore the audience by proxy is just a bit weaker hence why I’m picking Yuuna as best character!

Thoughts on the OP (opening) and ED (ending) and the soundtrack in general? Initially I wasn’t too thrilled with the OP, “Momoiro Typhoon” by Luna Haruna but the more I listened to it week after week the more I enjoyed it—especially the latter part. And my opinion in the ED “Happen ~Kogarashi ni Fukarete~” by the female cast is somewhat similar, I enjoy it more now than I did at first.

What’s something unique about this show? The very concept of this show is unique, a harem anime but where the male protagonist’s goal is to never see the female main again by having her ~ascend~ to heaven because she’s a ghost with “lingering regrets” that keep her tied to the living world? Whether or not the series actually goes through with having Yuuna “cross over” it’s still a dark ending that the show is all too aware is the expected end goal.

What other anime are most like it for the sake of comparison? Monster Musume is a pretty solid comparison—though Kimihito—the protagonist in that series doesn’t hold a candle to Kogarashi but likewise the girls in Monster Musume are far more unique and distinct. As far as anime go, regardless of what you think of the harem genre’s tropes this is still a considerably unique anime and well worth the time spent on it!

Who would you recommend it to? As long as you’re fine with excessive fan-service and harem related shenanigans this series is worth a recommendation to almost anyone—despite its genre its surprisingly wholesome and character driven—in addition to being ridiculously sexy—what, it can be both?!

Sum up the season in one sentence: ‘In death we’re privy to the allure of life in all its unexpected minutiae, aka ghost girls just wanna have fun.’