Out Of The Running – An Anime QandA Review of ‘UzaMaid!’ Episode 5 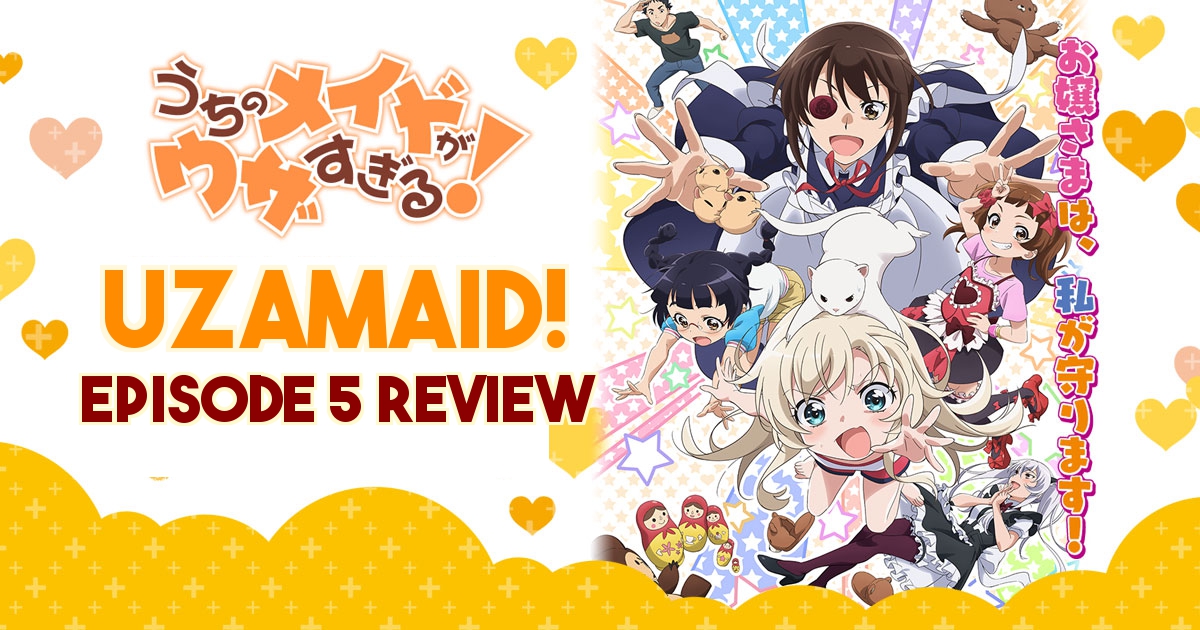 So what’s the show? UzaMaid! Episode 5.

So how’s this episode? After one or two teething problems in previous episodes (that may or may not have been just me not fully realising what this show’s intentions were) we’ve finally settled into a nice and familiar groove thematically without the experience feeling hackneyed or repetitive. In other words, it’s a great episode.

Cool, I guess. So what’s it about? Well it’s two stories, the first is about a new character–a classmate of Misha’s named Yui Morikawa who has worked herself up into believing the two of them are “rivals”. Not because of anything Misha has explicitly done to her, just out of the virtue of Misha being effortlessly cute and Yui taking umbrage with that because she works so hard to be cute herself. This one-sided rivalry comes to a head when Yui is walking up and down the streets of Harajuku in the hopes of being photographed for an Elementary School Fashion Magazine (which I don’t know if that’s actually a thing in Japan, but just go with it) when the very photographers she’s trying to court ask Misha instead to model for them–which she swiftly declines.

That’s gotta rile up the little fashionista? Indubitably. In fact Yui challenges Misha to a competition to see which of them is truly the cutest–to be officiated by Mimika (who was out shopping with Misha at the time) and of course Tsubame was lurking about and offers her worldly wisdom on all things cute to both girls throughout the course of the segment.

And how is the segment? It’s slight but funny, Tsubame has some great moments to do with her various unsubtle costume changes, but it’s more about introducing Yui as a character and the dynamic she eventually has with Tsubame that being a sort of ‘apprentice/master’–which is nice, it’s good to see Tsubame forming connections with other characters.

And the second segment? It contains the more ~meaty~ material, and is therefore far more interesting and worthwhile. It’s the day of the sports carnival and expectantly Misha is bad at physical activities–what with her favourite past times including eating and playing video games! Tsubame and Misha’s father Yasuhiro have come along to cheer on their favourite little girl. After finishing last in her first race, her team is reliant on Yui to carry them to victory as she’s the athletic member of their class only she sprains her ankle (twice!) and is put out of commission. In her stead Yui wants her new ‘master’ Tsubame to compete and she does so–trouncing the competition. It’s not until Tsubame and Misha have to participate together in a 3-legged race does Tsubame realise not everything is about winning, especially for Misha who just wants to do her best; but at her own pace.

What makes this segment better then? Not only is it consistently funnier–the stuff with the black cat harassing Yui was hilarious–it also touches on the feels a little too. Little by little Tsubame is fixing this broken little girl and it’s a heartwarming joy to watch every single week–it’s just buoyed by the fact that the show has inappropriate lolicon humour by the bucket load too!