What’s the show? That Time I Got Reincarnated As A Slime, Episode 9.

So how’s this episode? Too often I feel like my reviews of this show–more than any other show I cover week-to-week–almost feel like a reaction to other reviews/opinions, rather than reviewing the episode itself. So in the interest of not being a person who’s endlessly defending a show against other people’s opinions I’m instead going to review the show like I’ve not seen anyone’s complaints about it!

Whatever fills out the spaces between the screencaps… that’s all that anyone pays attention to anyway. Harsh, but fair.

So what happens in the episode anyway? Rimuru transforms into his human self and tries to figure out if he’s a boy or a girl–turns out he’s genderless–which you know, makes sense considering slimes (probably) are, but still an interesting thing to bring up. After realising that his human form has taste buds (and therefore can actually taste food) he asks that his tribe prepare a great feast to celebrate! After playing around with some new abilities he got from Shizu he receives a call (via telepathy?) from his direwolf Ranga that trouble is brewing! 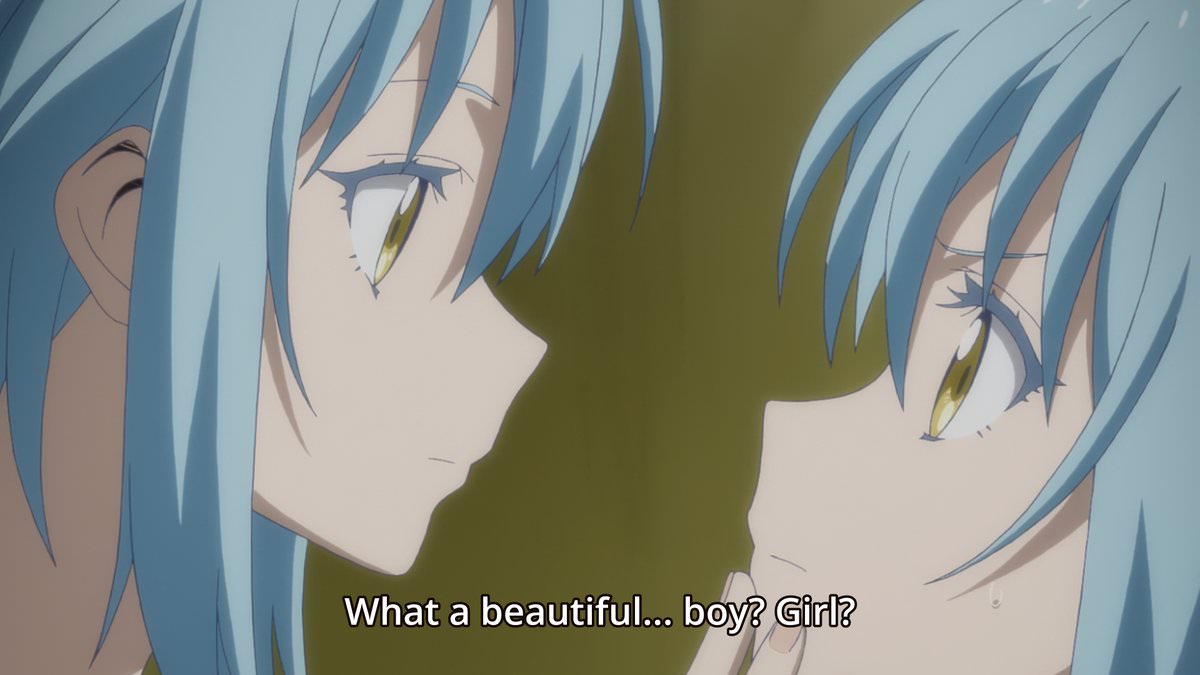 What’s the trouble? Well the tribe hunting party has been beset upon by a group of ogre’s! And first of all let me just say I love how varied the designs are for the ogre’s–if the goblin’s seemed a little bit samesy–then the ogre’s definitely don’t have the same problem. Also, I ~love~ the sexy tall ogre Shion–I mean I loved her from the first time seeing her in the credits but getting to actually see her in action was everything I could have hoped for!

Uh-huh… please get to the point. So they’re having a scuffle because the ogre’s believe Rimuru (who’s now wearing Shizu’s mask in an effort to utilize its magic dampening abilities to hide his intensely powerful aura) is responsible for sending a horde of pigs into their village and decimating it. They have a fight–Rimuru easily incapacitating the ogre attackers–but he doesn’t want to fight, he just wants everyone to get along! Eventually he manages to convince them of his innocence, with the help of a cute pink ogre girl called Shuna, who realises that he’s not the one they’re looking for. Afterwards Rimuru invites them all to join their feast–and that’s it. The whole episode.

Okay, you sound disappointed. I’m not, rather, I wasn’t while watching it, I was having a good ol’ time! I liked Rimuru’s creative ways of non-lethally incapacitating his opponents, I enjoyed the banter, I especially enjoyed the ogres. But yeah, while I’ve often defended the pacing of this show, I think they could have gotten to the point a heck of a lot quicker. Like I get it, the head ogre was angry and wanted vengeance and wasn’t willing to listen to reason, but it didn’t need to take as long as it did to just get to ~neutral~ again. But really, this is only a complaint if you’re watching this week-to-week, in a binge this probably feels fine! And as I said I enjoyed the episode enough what this amounts to is a nitpick at best. Great episode, more sexy ogre action please!

Previous The Time I Got Reincarnated As A Slime Reviews: