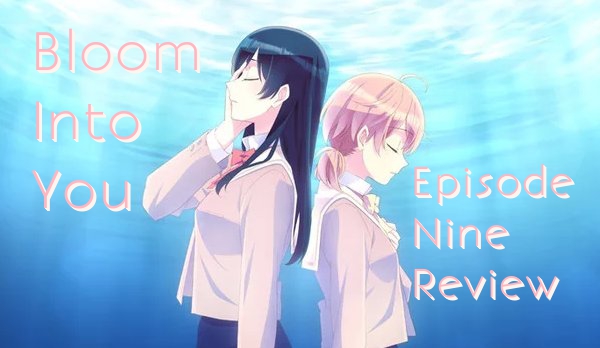 What’s the show? Bloom Into You, Episode 9.

So how’s this episode? As always it’s low-key brilliance, but there’s a single moment that’s the centerpiece of the episode that was so devastatingly beautiful that I can scarcely bring myself to talk about it.

Well that’s hardly going to make for a good review–how about talk about what this episode is about first and then maybe you can make some headway on “the centerpiece” later. Sure, so it’s coming up to sports festival time and Touko is getting more affectionate than ever, making out with her in the sports shed a bit before Yuu insists they stop. She tells her she’s banned from kissing her until after the sports festival–Touka agrees but on the condition that Yuu initiates the kiss next time they do it. The day of the sports festival comes, and its just jammed packed full of these cute little scenes from so many different characters on the show, it’d be almost boring to list all of them. My favourite though were Koyomi the writer discussing her troubles with writing the script for the play and Miyako the cafe owner coming to visit for girlfriend Riko who is participating in the teacher’s relay race. There’s even a lot of great back and forth between Akari on the basketball team and Touko as they size up before their big relay race. Which leads in to…

Ah the all important scene, so let’s hear it, what was so good about it? So after Yuu completes her portion of the relay race she’s watching Touko run and as she’s watching this beautiful girl; the sun glistening off her sweat streaked cheeks, the wind rushing through her hair and the determined but effortless look on her face she finally realises that she does in fact have feelings for her. There’s no need for any words, no over-bearing inner monologue, just the way everything disappears from her vision but Touko and then the look on Yuu’s face. It’s just utterly perfect and at the same time absolutely heartbreaking.

Oh? Well Touko doesn’t want Yuu to fall in love with her and yet it’s happened (more or less) and as beautiful as it should be, it’s a moment tinged with an inevitable heartache for one or even both. It makes for powerful and compelling viewing and somehow even manages to top the ‘river’ scene from Episode 6!

So what happens after that then? Obviously Yuu doesn’t say anything about these burgeoning feelings but Touko is still ~DTK~ and after the sports day is over corners Yuu in the sports equipment shed again. It’s a scene that’s somehow both romantic and explosive but also kind of awkward and uncomfortable… but that’s a good thing, I think?

What do you mean? I mean in a narratively rich and dramatic way, obviously it sucks for Yuu to have to be in this situation–afraid to confessing to new feelings because of being shut out by Touko who just wants Yuu to remain the same ‘loveless’ entity. In some ways there’s something controlling and predatory about Touko’s behaviour–she only wants Yuu to basically be her doll, to come along and kiss and hug whenever she wants, never to grow beyond that. I mean that’s probably a harsh reading of Touko’s character but nevertheless it makes for an inherently watchable drama!

Anything else you want to add? I don’t mention it enough in my reviews (mostly because I’m rushing and forget things) but music plays a big part in the episode especially the insert song that accompanies the ‘big scene’ in the middle. It’s a gorgeous piece of music with some thought provoking lyrics and it just adds to the brilliance of that whole part of the episode.

Overall thoughts then on the episode? I don’t know if this is my favourite episode, in hindsight it may well be just because of how much of a turning point it was and of course how well made it is but I think there have been more visually distinctive episodes (such as the aforementioned Episode 6 that was straight up art), this one is a bit more visually simplistic but what it makes up for in spades is genuine emotion and that’s something that’s a lot harder to come by than pretty pictures.

Previous Bloom Into You Reviews:

4 thoughts on “Racing Hearts – ‘Bloom Into You’ Episode 9 Review”