So how’s this episode? Right so I’m going to get a few ‘biases’ out of the way real quick so you understand exactly where this review is coming from. First of all I really enjoyed the first season of this show, so much so I wrote an impassioned defense of the show where I compared it to (somewhat) similar show ‘Love Live’ and explained all the ways it was better. (You can read that review by clicking this link!) Secondly, I play the ‘BanG Dream! Girls Band Party’ mobile game pretty religiously, though I admit I skip a lot of the story parts in the game as I’m more about the rhythm and gacha parts of the game. But that means not only do I know and like a lot of the characters, but I’ve heard all the songs from the 5 bands in the game approximately a million times each, so suffice to say I’m a fan.

Right, thanks for full disclosure and all that. How does that affect how you approached this anime’s first episode? I was wary, mostly because I was wondering how they’d suddenly introduce 4 new bands into a show since the first whole season focused solely on ‘Poppin’ Party’ the band who comprises the main characters on the show. I worried that it might come off as overkill or confusing or at worst just bloated and messy to introduce twenty characters at once–but remarkably, somehow they completely pull it off. It’s not flawless, but it works.

20 new characters?! Yep, we’ve got ‘Pastel Palettes’, who are introduced right off the bat being watched on television by one of the other characters, so it seems like they are the famous, established girl band of the series. Then the other three bands, who are still playing local venues are: ‘Afterglow’, ‘Hello, Happy World’ and fan favourite ‘Roselia’. We only get a glimpse of each of the band members but they all have a distinct and fun character trait that either compliment or contrast with the image of the band they are in. But before I go into the individual band performances there’s something important that I should have probably addressed earlier as it’ll undoubtedly be the thing that catches most people’s attention–especially those people who only ever watched the first season of the show. 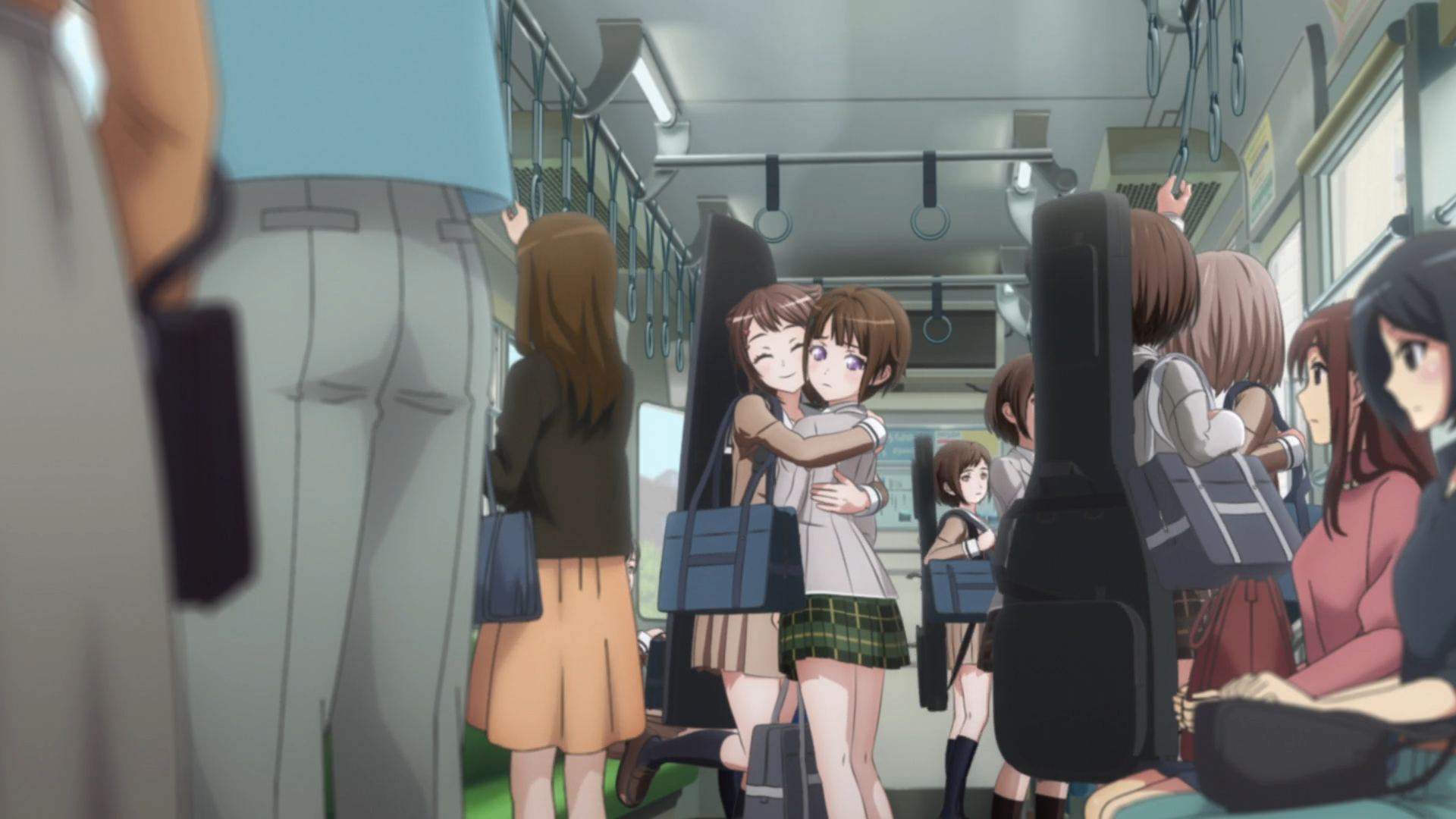 Yeah, and what’s that? The show is in 3D now. That is to say all the characters are 3D anime characters against mostly hand-drawn 2D backdrops.

Oh? And how do you feel about that. Here’s the thing, I didn’t actually know this was going to be the case… I knew they had a new animation studio behind the 2nd season but I didn’t know they were doing 3D and at first it was jarring, as it often is to see characters in 3D. But the more I watched, and the more I thought about it not only did it make a lot of sense but in some ways it was actually better than the first season’s 2D visuals, and that’s a hard task because at times season 1 looked absolutely gorgeous. But why I think it’s better here is that we have five musical performances in this episode (and that’s not even including the credits) so to animate all these traditionally would have taken a long time and increased the budget exponentially. But with 3D, you get all the fine detail of individual fingers picking guitar strings, or striking keyboard keys and the fast animation of drumming and dancing without having to resort to the usual budget tightening tricks of traditional anime like panning over still images of people performing. Also it’s not that much of a stretch for players of the game to see these characters in 3D as that’s how they are portrayed in the mobile game story scenes, so in a way it makes more sense.

Fair enough, and these performances you mentioned, are they any good, aside from being actively animated? They are probably the best thing about the show so far. Speaking from a biased perspective ‘Roselia’s’ performance was the best, they are a straight up rock band and hearing ‘LOUDER’ (one of their best songs) accompanied with visuals for the first time sent chills down my spine, and the little animation flourishes they put into lead singer Yukina’s performance gave her so much stage presence in a way I haven’t seen since the ‘K-On!’ days with Mio singing the ED songs. What was most surprising however was ‘Hello, Happy World’s’ performance, as they are my least favourite band from the game but seeing how much energy they all had and well their (admittedly gaudy) visual aesthetic matched their rambunctious songs it completely sold me on them and that’s something I never expected to happen.

Can you give an unbiased review of this episode, like what you think a person who’s not a fan of the game could come to expect from the show? Actually I can, but it’s not my opinions but those of the irlwaifu, Sharon that I’ll have to relay. See, she didn’t much care for ‘BanG Dream’s’ first season to the point where she kind of made fun of it, which is fine. Nor has she played the mobile game, so her opinions are completely unbiased. But the way she reacted to seeing ‘Roselia’s’ performance was with surprise and delight, and by the end of the episode she was not only happy to have watched the show but even looking forward to the next episode! How’s that for an unbiased review?!

Fair enough, and a summation of your thoughts? How would you go about recommending this considering it is a 2nd season? I think you could conceivably watch this and not be too lost, but I ~am~ basing this off one episode, the call-backs may become too strong to ignore later on. If anything this feels less like a 2nd season and more like an adaptation of the game. Season 1 gave you all the minutiae of ‘Poppin’ Party’s’ formation and the backstory for all the characters but this almost feels like it’s setting up a larger scale ‘battle-of-the-bands’ style series just against a slice of life backdrop. I could be wrong and the show could scale back to how season 1 felt by next episode but I’m hoping we get this type of show week after week. If any of this sounds interesting, you’re interested in more instrument heavy, J-pop/rock or you just want to see some really well put together 3D performances than I’d say give ‘BanG Dream: 2nd season’ a go!