A look inside my Anime Office

For the past three or so years I’ve been working on turning the spare room in my partner and I’s apartment into what I’ve dubbed an ‘Anime Office’. Functionally its almost like a museum space for me to display my anime merch while also featuring a desk, chair and spare single bed. I’m a bit of a perfectionist when it comes to things like this and so while it’s been about 95% complete for about 3 months now I’m only just now willing to share photos of it with the rest of the internet.

(Note: These photos were taken by the irlwaifu, while I provided lighting and direction. Also a couple of photos contain NSFW imagery but I’ll warn you before those photos appear.)

The first thing you see as you approach the room is the Japanese door curtain–or ‘noren’ as it is traditionally known. The curtain features Latifah and Sento from ‘Amagi Brilliant Park’, below it you can see a doormat featuring the main cast of ‘Is The Order A Rabbit?’ the latter of which was a particularly lucky find as it was the first time finding an anime themed doormat and it happened to be from one of my favourite CGDCT anime.

One of the main focal points is the ‘Yuru Yuri’ bedsheet which I’ve re-purposed into a curtain or even flag of sorts, its made of a much higher quality material than the usual anime bed sheets (which are usually a rough cotton material) hence why the pride of place against the room’s actual curtain.

Immediately as you enter you see the bed which is currently occupied by four body pillows (dakimakura in Japanese) they feature–from front to back–Ruiko Saten and Kazari Uihara from ‘A Certain Scientific Railgun’, Amane Suou from ‘The Grisaia series’, Ginko Sora from ‘The Ryuo’s Work Is Never Done’ and Rize Tedeza from ‘Is The Order A Rabbit? series’. (If there’s enough requests I can do a separate post featuring more detailed pictures/descriptions/information of any of the merch shown through this post).

To the immediate left of the bed as you enter is a wall filled with anime tapestries (wall scrolls) which are (usually) made of suede, supported by PVC rods and hung with string.  I’ve actually got about 3 times as many wall scrolls as seen here but these are my favourites. Occasionally I’ll switch out some for others to give a change of scenery but these are the ones that most frequently feature.

Immediately above the bed hanging from the roof is a single bed-sheet of Yami from ‘The To Love-Ru series’. It makes for an impressive sight while lying in bed.

From the bed the rest of the room can be seen though there’s a lot more to it than can be captured by a single photo. Nevertheless, here is a single photo of the view from the bed.

Perhaps the most visually eye-catching (if only from a colour and size perspective) part of the room is the wall-mounted blanket of Hachiroku from the ‘Maitetsu series’. Long story short, while on my most recent (February 2019) trip to Japan I discovered an anime girl from a series I’d never even heard of and fell in love so naturally I needed something equally impressive to celebrate her with.

Occupying (almost) an entire wall directly opposite the leftside tapestry wall are a series of bookshelves which contain all my manga (the first four shelves–looking from left-to-right) my anime blu-rays (the next two shelves) and non-anime blu-ray TV shows (the final three shelves). Atop them are some ‘Monster Musume’ postcards that have been mounted in frames and some ‘Fairy Tail’ funko pop toys. 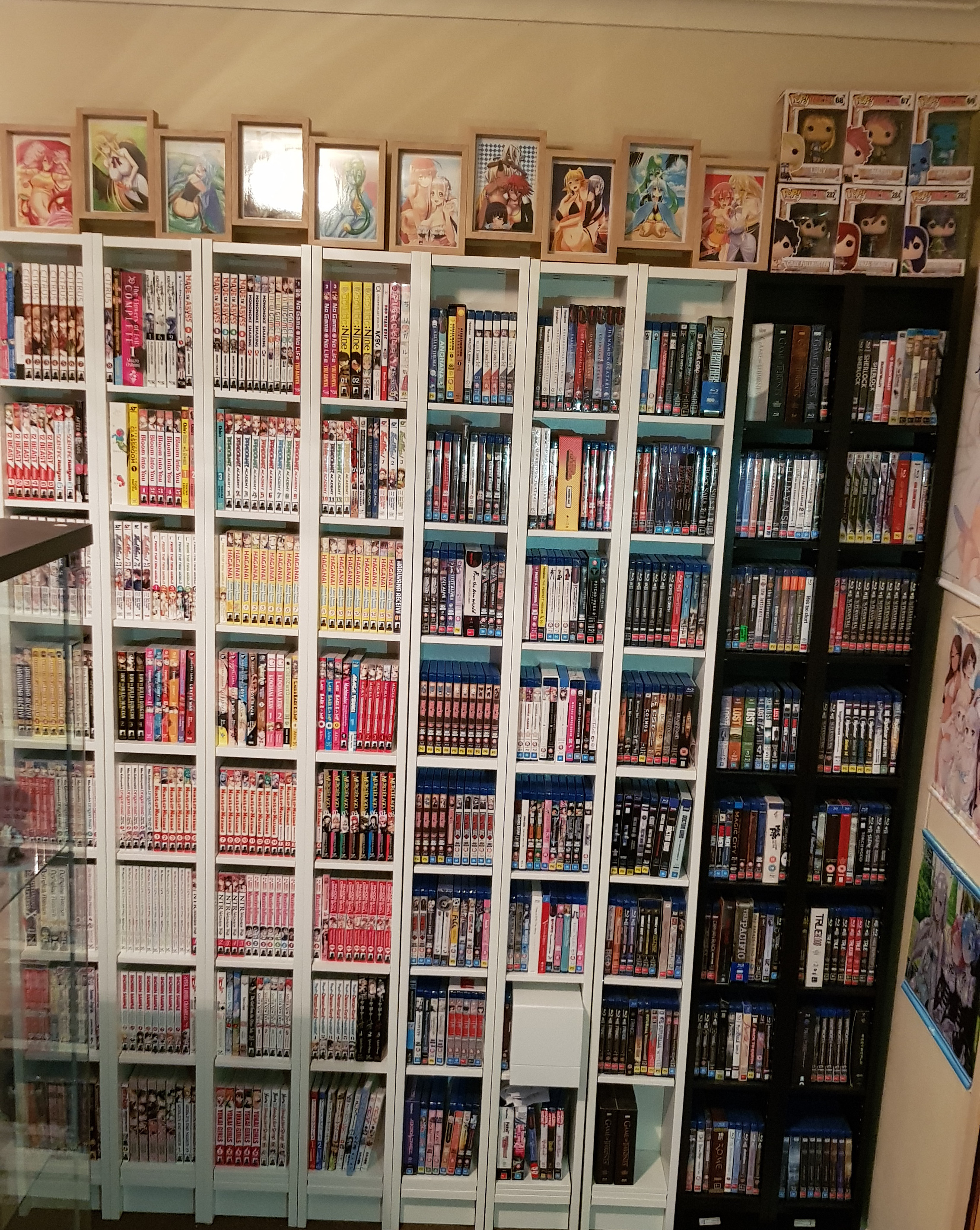 The desk itself, which sits between the bed and the bookshelves in the corner of the room has itself another bookshelf (a slightly wider one with anime DVD’s and anime art books and then the desk itself which is unsurprisingly adorned with many mousepads. (Second image is NSFW, also contains random photo of irlwaifu dressed as Umaru on my desk).

But my favourite part of the room (at least from a collectors standpoint) are my bishojou figures, encased in a glass display case in what is almost the centre of the room. (I’m going to spend a bit more time on this section than previous ones, also some of the figures are NSFW so there’s your warning).

And that’s it for my Anime Office tour! I probably missed a few little things, but if there’s anything you want to know more about just leave a comment below and I’ll hopefully be able to answer your questions! Thanks for reading!

9 thoughts on “A Look Inside My Anime Office”