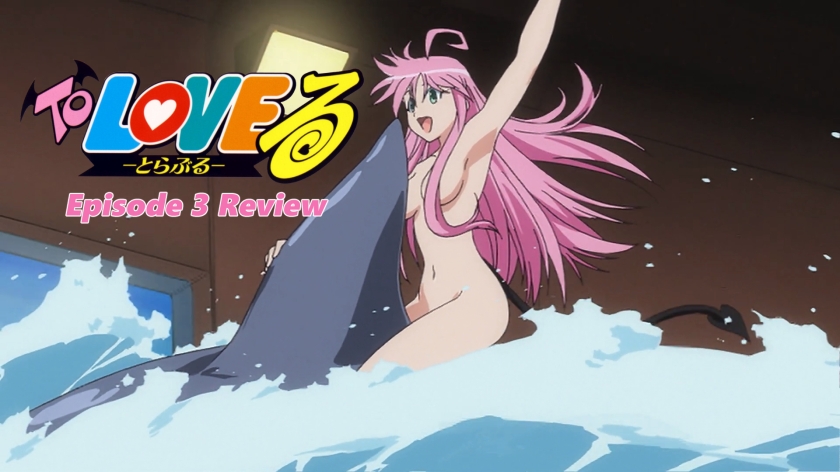 And how’s this episode? During my first watch of this series I recalled Episode 3 as being something of a turning point, where I went from simply “enjoying” the show to out and out “loving it.”

Yes, I recall you mentioning that in previous reviews? And does that sentiment still stand? More or less.

Why do I sense less enthusiasm with that reply? Well clearly my ‘memory’ of the episode was more focused on the latter half of the episode–which is fantastic, flawless even. Whereas the first half is just great.

“Just great”, huh? Hardly all doom and gloom, then? Precisely, overall this is still an excellent episode, I’m just making a note of the difference between when I first watched and this subsequent viewing.

Fair enough, so what happens in the episode? Well the first part of the episode concerns Rito having to deal with Lala’s ~influence~ at school and even if I think Rito acts a bit too harsh towards Lala I can at least understand where he’s coming from considering how much upheaval his life has gone through in such a short period of time. Afterwards, Mikan decides she wants to take Lala out shopping to show her ‘round the city–after some outfit changing shenanigans they run into Haruna and things get awkward (again) for Rito. Mikan makes up an excuse about Lala being a relative from overseas as to why she’s living with them and proceeds to invite Haruna to the aquarium with them.

So that’s the first half of the episode, things get better in the second half then? Funnier is the easiest way of putting it. Lala being the curious, free-spirited alien princess that she is, finds her way into a holding tank behind the scenes but is unimpressed by how lethargic the sea creatures are. Using her D-Dial, she summons some pills to give the fish more ‘genki’ but it ends up just causing them to flop on the floor outside their tanks. An aquarium staff member sees the flailing fish and rightly panics, exclaiming the fish need water or they’ll die, Lala–taking the command literally summons a device from her D-Dial which produces unlimited amounts of water. The water builds, Lala strips naked and rides a shark down the corridors of the aquarium as the entire building floods in a scene of utter chaos. It’s just so much fun to behold!

And what are Rito and the others doing while all this madness is unfolding? Well Mikan, being the savvy imouto that she is, realises that there’s ~something~ more to Rito and Haruna’s “relationship” and gives them some alone time together so they can sort it out. And they almost do with Rito half-confessing his feelings for Haruna will Haruna doing the same (she’s fallen for his ‘kindness’, you see) but before they can get it all out in the open Lala and a literal wave crashes their intimate moment.

So things are better between Rito and Haruna now? Well…

What? Well the next day, Lala and Rito are walking to school, Rito somewhat content that things are moving forward for him and Haruna, he spies her on the school road, rushes ahead, trips over and ends up falling under her skirt–his face an inch from her panty clad crotch! She slaps him away and runs off, leaving Rito to lament his bad luck.

That seems like a good a time as any to segway into the ‘fanservice’ portion of the review, yes? Hooray!

That’s a bit more ‘safe’ than I’d expect from the show… And then later on Lala gets naked at the aquarium and while these scenes are also pretty sexy–Lala at her most free and uninhibited is always ~best~ Lala, but these scenes are unfortunately devoid of any nipples–not the end of the world, but kinda disappointing all the same…

Sorry to hear that? I know you’re being sarcastic, but thanks.

And how about the Haruna panty shot? I never thought I’d see the day where you’d ask me about a panty shot…

Just get on with it! It’s pretty damn good, I always love a panty shot–and ‘To Love-Ru’ is kind of (in)famous for its “Rito falling over and ending up in between a girl’s legs”-shots and while this one is a bit lacking in angles it at least has decent detail (though nothing compared to ‘To Love-Ru Darkness levels of detail).

Final thoughts and score for ‘To Love-Ru’ Episode 3? Episode 3 is where ‘To Love-Ru’ truly comes into its own and shows many of the things that become hallmarks of the series (at least as far as this first series is concerned). Not only does it contain a decent amount of character development but it’s also fun, silly, sexy and at times laugh-out-loud funny. My score for the episode is 95 out of 100, whereas my score for the fan service is 75 out of 100.