All the new anime episodes I watched in Week 1 of the Fall 2019 season ranked and reviewed!

Fall has, err, fallen and so begins the new anime of the season (with of course a few stragglers from the previous season who are still going for various reasons), anyway I was absurdly excited for the new anime to begin and for the most part it lived up to or exceeded expectations! Let’s dive in!

Ascendance of a Bookworm – Episode 1

I generally don’t like to drop any anime after only watching a single episode (the last time that happened was over a year ago) but ‘Ascendance of a Bookworm’ just failed for me in almost every regard. The pacing was at a snail’s pace, the main character was annoying and difficult to relate to (I mean she literally just died and was reincarnated in a fantasy world and the only thing she ever talks about is books, where are your priorities?!), the setting was dull and ugly, the overall concept was flawed and its execution even more so. Also, throughout the episode I got the feeling like I was watching a kids show from the West and distinctly not an anime, which I mean as far as an anime is concerned is the biggest crime imaginable! Right?! 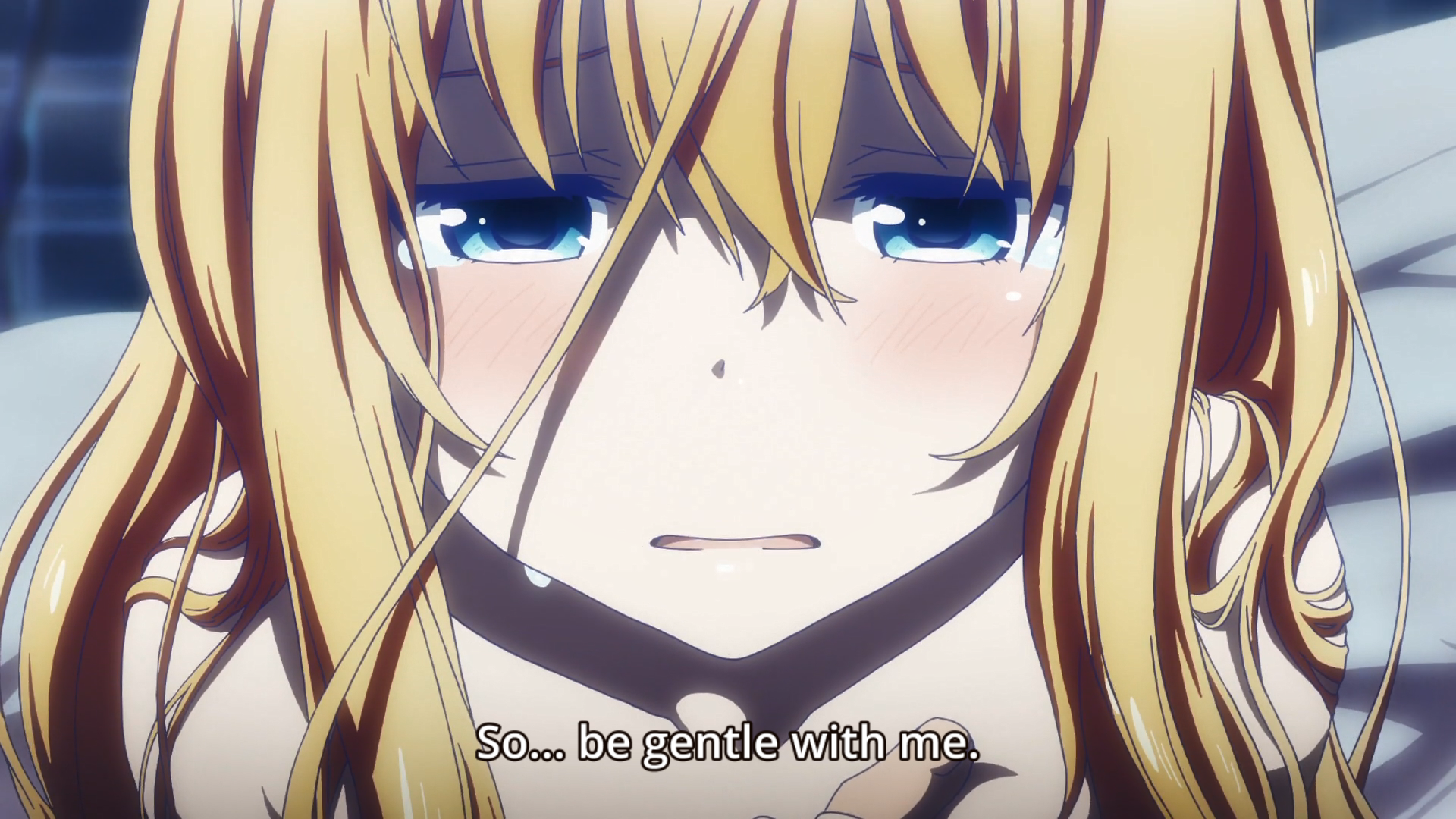 Chalk this one up to my expectations from the quality of the manga not being met by the adaptation–at least as far as the first episode goes–because this was kind of a rough sit… Though in the episode’s defence it did fair better after a second viewing where my expectations were more tempered but it’s hard to deny that things were rushed, confusingly executed and not anywhere near the quality of the manga. Also on the fan-service front things were disappointingly tame. I’m not completely writing off this series as there’s still a chance both the pace and the quality could arguably improve with subsequent episodes but I’m still cautious…

I’ve never been the biggest fan of board games (mostly because I have no friends) but I’ve always appreciated the tactile aesthetic of them and likewise the relaxing amiable culture around board game playing in general. So obviously a CGDCT slice of life anime is the perfect fit for such a laid back past time, and indeed this first episode shows tremendous promise not only with its aforementioned relaxed vibe but with characters who are interesting and occasionally complex and comedy that’s subtle but fun. I doubt this series will reach the heights of other “relaxing” anime such as ‘Non Non Biyori’ and ‘Laid Back Camp’ but it’s set itself up to enjoyable nonetheless.

Undeniably, ‘Cop Craft’ ends its run on a high and absolutely leaves me wanting more but at the same time is wrapped up with the kind of confidence of writing that leaves me absolutely okay with the fact that we’ll likely never see Kei and Tilarna again. This show is just a solid example of a series that knew exactly what it was and did it well from beginning to end with only the most minor of hiccups along the way.

The Hero Is Overpowered but Overly Cautious – Episode 1

The absolute best thing about this isekai–which based off the premise alone could be accused of being somewhat derivative–is that this entire first episode (and presumably the rest of the show) is told from the perspective of the person doing the isekai-ing, i.e. a goddess by the name of Ristarte who’s just trying to do her best against while having to deal with the fact that she summoned a way too cautious ‘hero’ to help her defeat a demon lord. And aside from the setting, this feels more like a comedy in line with the likes of ‘Konosuba’ than it does your bog-standard isekai, which certainly makes for a more immediately enjoyable experience. Also, Ristarte is wonderfully over-the-top and her line deliveries and facial expressions make for comedic joy.

As I said in my pre-season watch list post, my experience with the ‘Fate’ series is pretty minimal compared to the breadth of content out there, I’ve watched the original ‘Fate/Stay Night’ anime as well as all of the ‘Fate/Kaleid Prisma Illya’ series but it’s only peripherally helpful in a series as dense as this one. And even though this episode is pretty confusing with regard to the amount of information and characters it seeks to impart, it’s just so gorgeous to look at and well made and paced that it’s easy to overlook the feeling that I’m in over my head. And while it might seem shallow to recommend something because of the size of its budget there’s to denying a lot of money has been put into this production and it’s all the more compelling and desirable for it. #justsayin…

I did not expect a show with such a seemingly ordinary premise “high school prodigies being isekai’d” to not only be refreshingly fun but to have so much character and energy too. The introduction to our characters is something straight out of a slick Hollywood movie, with characters too impossibly young and talented and influential to actually exist and yet it pulls it off with effortless confidence. Who knew watching a bunch of spoilt high school prodigies being swept off to another world could be so compelling and dynamic?!

Talk about your roller coaster of emotions! This finale did pretty much everything right, by being both emotionally satisfying, dramatically unexpected and brutally honest–the latter of which I was not expecting but was absolutely glad for. I won’t spoil it for the whole two of you reading who may end up taking up this series but rest assured if you’re looking for an idol anime that doesn’t play it safe with expectations and isn’t afraid to wring a few tears than this show has proven itself a worthy entrant in the genre.

Just so you all know I’m not someone who plays the mobile game ‘Azur Lane’ on which this anime is based–I played it once, wasn’t really interested in the gameplay and never played it again. So it’s with this caveat in mind that you should realise how unexpected that a show like this gets such a high score in its debut–it’s not that this show does anything unique or revelatory or emotional–it’s simply that it delivers a purely entertaining kinetic experience filled to the brim with personality, action, humour and light-fan service that makes it a near peerless experience. You shouldn’t go in expecting anything other than an over-the-top, highly polished, ridiculous good time and as long as you’re willing to accept it in all its forms then you should at least appreciate the brilliance of this cute girl action madness.

When I saw that this episode would focus on a reunion of sorts between Hajime and his old classmates a part of me was dreading it because I honestly couldn’t care less about any of them and yet true to the stellar writing of this series this episode did, in fact, make me care about their current plight. Still, every scene with Hajime and his ever expanding harem was an absolute delight and the fact he’s now practically adopted the kawaii mermaid girl from last episode and is referring to her as his daughter is just all kinds of adorable and wonderful.

YU-NO: A Girl Who Chants Love At The Bound Of This World – Episode 26 (Finale)

As far as this show is concerned this finale is functionally perfect, it not only has the audacity to wrap up at least half a dozen plot threads from the previous 25 episodes but do it in a satisfying and emotionally charged way without seeming contrived or cheap. The various call-backs to previous moments from all the way back to Episode 1 make this feel like a complete story in the way few time-travel centric shows do. And while my sole gripe with the finale is that it deserved at least 5 or so more minutes to elaborate and expand upon the more heady concepts that befall its protagonist, I’m still just kind of in awe that they went for an ending as ephemeral and mysterious that they did–big kudos on that front!

For those who don’t remember Season 1 of ‘We Never Learn’ was my Number 1 show of Spring 2019 so fair warning there’s a possibility that this show will remain unseated from the ‘favourite’ spot going forward. Though that said, I’d argue that the strength of this return is less informed by a general bias in favour of this series specifically and more down to the fact that this is honestly a frequently hilarious, occasionally heartfelt and all round entertaining episode of an anime that may well be the single best ‘Hot Springs’ episode of any anime I’ve ever seen–and that’s not something I say half-heartedly!

And that’s what I thought of Week 1 of Fall some 1st episodes and some last episodes! There’s still a bunch new shows starting next week as well as ‘Arifureta’s season finale to come so look forward to that. Let me know your thoughts on the week and as always thanks for reading!