All the new anime episodes I watched in Week 8 of the Fall 2019 season ranked and reviewed!

All the seasonal anime I watched in the eighth week of Fall 2019!

This show has always been a bit off-kilter (which is a part of its appeal) but this episode simultaneously felt very weird and very familiar with a plot reminiscent of an episode of CSI but with the kind of anime and Japan-centric shenanigans such as sex robots, trading cards and weird USB’s. Oh and we’re also introduced to Sherlock’s brother Mycroft, who makes an interesting addition to this burgeoning cast. At the end of the day it’s just an entertaining 24 minutes and who can fault that?

The term ‘jump the shark’ is something I hasten to use in reference to anime–especially fantasy anime where magic is a thing–but the kind of ridiculous, borderline nonsensical leaps in narrative logic and complete removal of believable actions that this episode showcased wholehearted earns the ‘jump the shark’ label. To (briefly) set the scene the town is being beset by fire demons and only by destroying a magical staff at the center of the roaring inferno can the demons be stopped. Having tried (and failed) to launch a missile at the target–Aoi, our swordswoman prodigy–decides she’ll manually guide the missile to its target by running alongside it. It’s a sequence of less than five minutes but almost all of it is incredulous beyond belief and makes zero sense if you think about it for even a second. Honestly this episode is so logic-less that it should be scoring at least 10 points less than I gave it but despite all its absurdity and stupidity it is honestly entertaining and the rest of the episode feels in-line with what’s come before so I can’t be too harsh of a judge on it.

Probably my least favourite episode of the show so far, it’s nowhere near the point to be alarmed by it but its at least worth mentioning–read my collaborative review with Irina from I Drink And Watch Anime for my extended thoughts on the episode.

Didn’t I Say To Make My Abilities Average In The Next Life?! – Episode 7

It’s ironic–I complained so much about how I wasn’t particularly enjoying the dark road this show had taken periodically in the previous two episodes and now that it has delivered what is ultimately a fluff-piece, slice of life-esque beach episode I only seemingly have more complaints. It’s not that this episode is ‘bad’ by any stretch of the imagination, its at times great but it also suffers from the fact that its recycling the same joke for the majority of its run time. Wise wants to have normie fun > Wise cooks up shenanigans that seem ordinary to her but are outlandish to the people of her new world > it all falls apart in a comedic fashion. Repetitiveness aside, I did appreciate and relate to Wise’s enthusiasm for seeing her friends in skimpy swimsuits, after all what’s a forced beach episode without considerable bikini fan service! 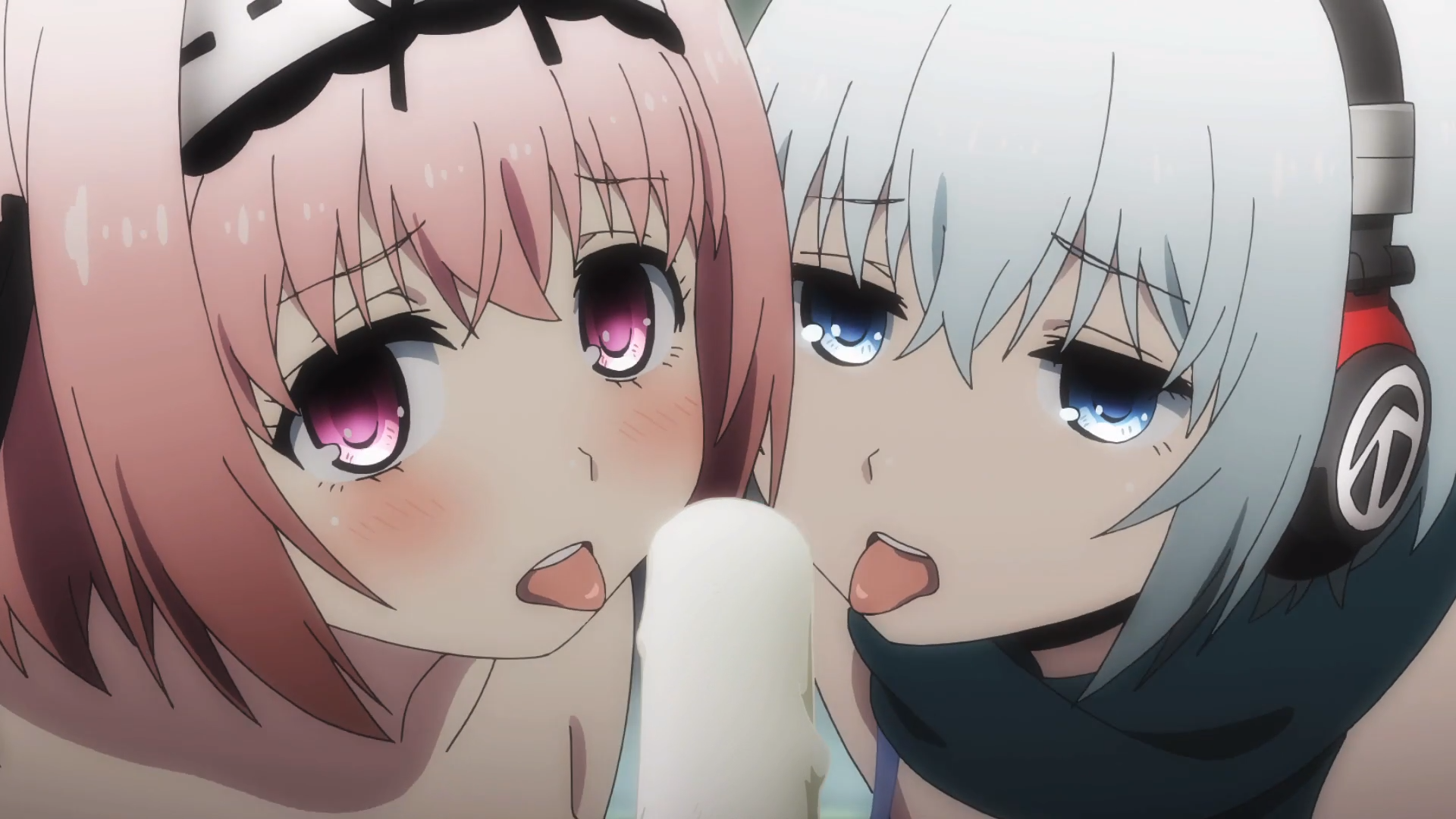 My favourite part about this episode is just how unabashed they are about finding ways to squeeze in fan-service but explain it within the narrative in a way that’s kind of hard to argue about. Plus the show at least attempts to show all the steps in becoming a lover, from hand-holding for an hour all the way to sexy near-nude photo shoots with phallic ice creams involved. Also Yakumo best girl and we get plenty of her here so obviously this episode scores high in that regard.

The Hero Is Overpowered but Overly Cautious – Episode 7

It’s more of the same and that’s hard to fault considering how consistent this series has been–not only at being funny and entertaining–but also in being cohesive and following up on things in a way a lot of comedy shows might disregard. Seiya continues to be a wonderfully loathsome protagonist and the introduction of a complete opposite in the form of Rosalie proves not only the benefits of Seiya’s frequently infuriating ‘play style’ but that existing in extremes (in either direction) is no way to succeed.

We’re finally properly introduced to the fourth member of our titular ‘After School Dice Club’ in the form of foreigner Emilia who adds a welcome, if predictable element to the series. The second-half of the episode dealing with the club’s attempt at a Board Game Cafe for the school festival is much more interesting, even if it brings back some side characters I’m not particular interested in…

What’s great about this episode is seeing Azumi’s journey from frail sick girl to badass fighter with her Overboost connection with Rigel saving the day after the Zex attempt an invasion for the second time. Where I think this episode falls slightly short of brilliance is in that everything happens so fast that it almost feels like playing a mobile game (complete with premium currency style speed-ups) rather than a truly satisfying narrative experience. That said it’s also plenty entertaining, extremely fun and loaded with laughs, feels and fan-service enough to make up for any narrative deficiencies or gaps in logic.

This episode kind of exists in two-halves, the first half being ostensibly a lengthy recap episode that feels like endless padding but despite the padding it almost feels necessary considering the unexpected dramatic upheaval that comes from our hero ship Enterprise being ‘possessed’ by something under the sea which leads her to go supanova and destroy her enemy with the kind of ruthlessness I didn’t expect from this show. So between monumental fan-service in the previous episode and now dramatic upheavals in this one, its hard not to be impressed by this show’s willingness to take risks!

Whatever you may choose to say about this show up to this point, there’s no doubt in my mind that comedy is this series’ strongest suit. Sure we get the requisite compelling qualifying action of Round 3 and 4 of the beam rifle showdown, but we’re also treated to some honestly affirming character development as well as some laugh out loud comedy. Hikari’s various reactions and off-hand remarks throughout this episode were an absolute joy and made the experience all the more enjoyable because of it.

For what ostensibly amounts to a training episode not only does this episode have big laughs and surprisingly dynamic action it also contains some considerable character development–at least on Shinra’s part. Excellent stuff all round.

It’s weird how an episode that’s ostensibly just a bunch of people in a room having a meeting is one of my favourites of ‘My Hero Academia’s’ 4th season so far. A lot of that comes down to the fact that the writing is so strong and its execution likewise that with every sentence the stakes seem to grow and the sheer scale of what our heroes are up against unfolds. Also, I’m glad Froppy and Ochako (and the other women such as Dragoon and Bubble Girl) at least get to add something more to this episode besides being window-dressing, we’re still a long way from me being happy with their treatment but this episode is still plenty compelling.

If the fourth season of ‘Food Wars’ continues along the way it’s been going it could very well be the show’s best season. It’s emotionally rich and satisfying with so many character moments culminating in a gorgeous experience while still retaining the good humour, fast action and fan-service (both of the sexual and food variety) that have made this show a winner for so long.

Arguably a fan-service high point for this show, ‘Kandagawa Jet Girls’ goes all in with the shenanigans and comedy and its there where the true appeal of this series seems to lie, I mean sure the races are high energy and fun–but when the show is just about girls having fun–it feels a lot more entertaining. Also, despite all the fun-times the show also manages to show just how big it’s heart is with Rin and Aoi finally getting to be open and honest with each other in an honestly emotionally fulfilling conclusion to their arc.

Best girl Uraka gets an entire episode to show why she’s best girl and it’s the episode is just the usual high entertainment, wonderful characterization, hilarious comedy and excellent fan service with just enough progression in the overall narrative to make it feel worthwhile without going overboard and committing to something the series isn’t ready to commit too.

This episode is a legitimate ‘balls-to-the-wall’ action extravaganza the likes of which rarely get the time to shine in episodic anime (at least the ones I watch) and not only is it with awe and reverence that I get to watch such a well-animated, fluid and borderline over-the-top action set piece but the fact that it ties itself so flawlessly into the unfolding narrative, has high-stakes that result in tragic and emotional character deaths and remains so enjoyable to watch means this is a pure success no matter where you stand. Truly an epic action fuelled masterpiece of an episode!