All the new anime episodes I watched in Week 10 of the Fall 2019 season ranked and reviewed! 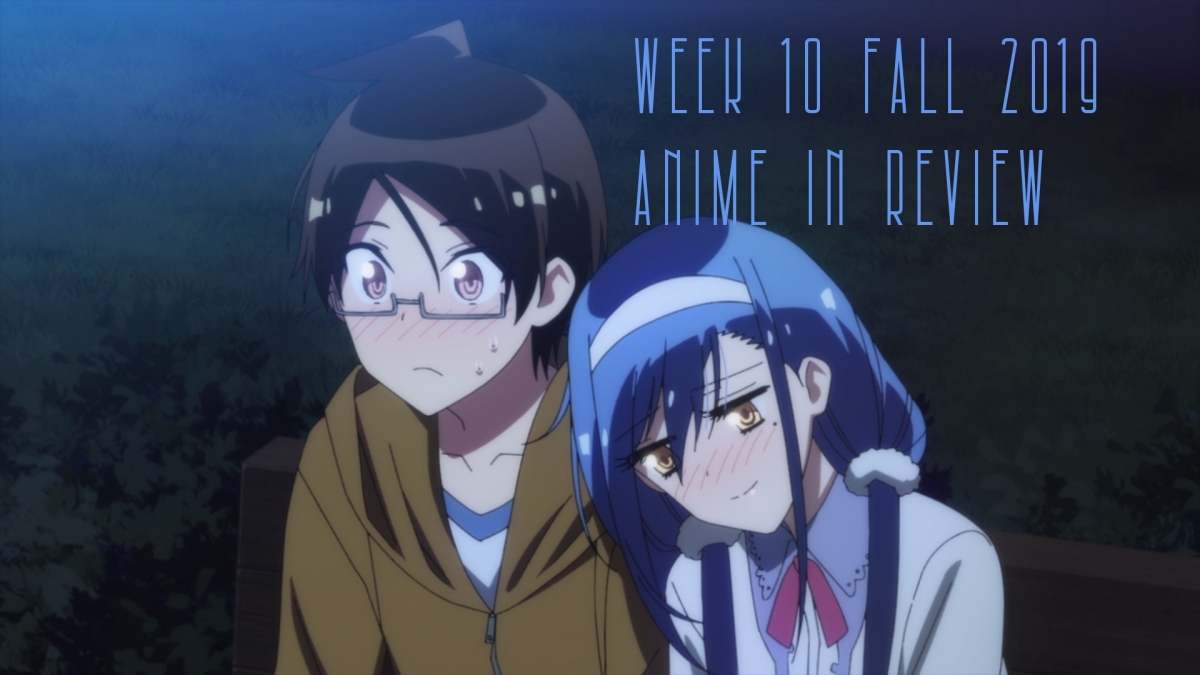 (Please note, there are no images because I had to rush this post out, apologies in advance–I may fix this at a later date).

All the seasonal anime I watched in the tenth week of Fall 2019!

This particular arc of the show has been an undoubted highlight so far, and while this individual episode felt a bit weird and unfocused (the sup plot with Fuyuto trying to court his crush was fun but very distracting and tonally inconsistent) the stuff with Irene found a much more satisfying balance between comedy and drama (the scene with the mask had me laughing out loud) and while the episode ends on a particularly dramatic cliffhanger I’m as excited as I am a little bit worried about this arc’s coming conclusion if my predictions are anything to go by…

This episode was painfully predictable from beginning to end which certainly went a ways to hamper my overall enjoyment, but it was also kind of fun and by the time the final minutes approached it was downright touching. Nevertheless this is probably the weakest this show has been so far so hopefully it improves from here…

Why have, one antagonist when you can have three? Well considering how many protagonists we have I can think of a couple of reasons why we ~shouldn’t!~ namely there’s too many people to keep track of, but at the very least they all look distinct so there’s no confusing who is good and who is bad. Nevertheless this is still a highly enjoyable episode, that neither skimps on the fan-service nor the comedy and comes up otherwise excellent because of it–even if it’s more or less more of what we’ve already seen so far.

The Hero Is Overpowered but Overly Cautious – Episode 9

My favourite thing about this episode was the idea of inescapably powerful antagonist that transcended time and space and could even render gods and goddesses helpless in its wake. And while I’m glad that Valkyrie; Goddess of Destruction was the one to seal the antagonist away–it all felt a little easy in hindsight. Though the subsequent training scene and subsequent misunderstanding between Valkyrie, Seiya and Ristarte was worth the price of admission alone!

Didn’t I Say To Make My Abilities Average In The Next Life?! – Episode 9

For the last couple of weeks I was not-so-secretly hoping that this show would go back to comedic adventuring and shenanigans and forego the excessive and serious back stories that had dragged the overall tone of the show down. And in some respects my wish was granted as the Wyvern hunting quest felt more in line with how this show started out but even then between the laughs and action the show still felt needlessly tied to being occasionally over-serious which clashed awkwardly with the otherwise excellent comedy.

I didn’t think an otherwise simplistic ‘date episode’ would help restore so much of what made this series so enjoyable in the earlier episodes. Likewise, I didn’t think that I’d be rooting for Ringo as a love interest for Tsukasa over Lyrule but this episode made Ringo wonderful all round. Also, the overarching storyline of this series–while minimally referred to here–still takes substantial steps forward and makes the final couple of episodes highly anticipated for me.

More of ‘Food Wars!’ just being its usual high quality self, the over reliance on flashbacks dropped it a few points but otherwise still a great episode.

It’s kind of weird that in a show ostensibly about jet racing we’ve now had two solid episodes without anything of the sort–thankfully what we’ve had instead is ridiculous comedic shenanigans, fun and sexy fan service and genuinely wonderful character development and emotional moments too. In other words, just a great time all round!

Things are improved in this episode (at least in my opinion), for my full thoughts check out my collaborative review with Irina on I Drink And Watch Anime!

There’s a lot of really powerful message in this show that are further highlighted throughout this episode though my favourite being that even if two nations are at war its people don’t need to be and can forge strong friendships. And after the high stakes action of the previous episode it’s nice to get some low-key, cute girl style down time with the three best girls on the show.

Back in my episode 3 review I had a good ol’ whine that cute girl show’s shouldn’t have such a focus on peripheral male characters–and while I stand by that fact emphatically–this show has somewhat morphed into something other than a cute girl show, so much so that I even hasten to put it in that genre anymore. As a result I can view the pivot into the more drama/romance aspects of this show in a much more favourable light and even root for our girls to find love–wherever it happens to come from. And yes, this episode made me cry a little at the end…

For a character who was only properly introduced a couple this episode went massively out of its way to dive deep into Suneater’s backstory, powers, and pretty much dedicate an entire episode to the young hero. And I’d be lying if I said I wasn’t exhilarated by the action or drawn in by the impressive characterisation–likewise the truly compelling confrontation between Suneater and the unique trio of villains he faced off against and his ingenious way of defeating them. I do have to wonder why we haven’t got anywhere near as compelling stories about our female characters on this show but I’ve pretty much come to expect that from this show by now…

How do you follow up a “perfect episode” with pretty much more of the same–and while the female characters are expectedly sidelined (hence the lower score)–this episode still manages some breathtaking action with ingenuitive tactics, awe-inspiring visuals and tense and dramatic set-pieces that rank among some of this shows’ best. Just ‘Fire Force’ being damn awesome as per usual!

Jaguarman (or “Jaguar warrior” as the subtitles have for some reason began to call her) was an odd comedic highlight in her first appearance some episodes ago, so having her appear again and feature so much and so central to the episode was bound to pique my interest. What’s more surprising is that we’re introduced to a larger than life ‘antagonist’ in the form of second goddess of the alliance Queztalcoatal–and even with her fantastic appearance she still manages to be upstaged by the sublime silliness of Jaguarman.

Often in my reviews for this show I’ve said things like “this feels like a turning point in the story” or likewise but truly this episode feels like something special with its honestly heartbreaking and beautiful exploration of Furuhashi’s past with her parents, but what’s more remarkable for me personally though is that how it somehow managed to make fifth ranked Furuhashi (in harem standings at least) rocket all the way to the top–at least for the time being! An almost flawless episode.