And so what happens in this episode? That’s a very good question… umm… yeah, this is an unusual episode to say the least!

Oh? How so? Well… 99% of the episode doesn’t have any of the main characters from the show, instead it’s told from the perspective of last week’s antagonist character Cyborg, except there’s 6 of him and the entire plot of the episode revolves around their side-job of coming in as ‘fixers’ for anime-projects that are struggling to make their animation deadlines. 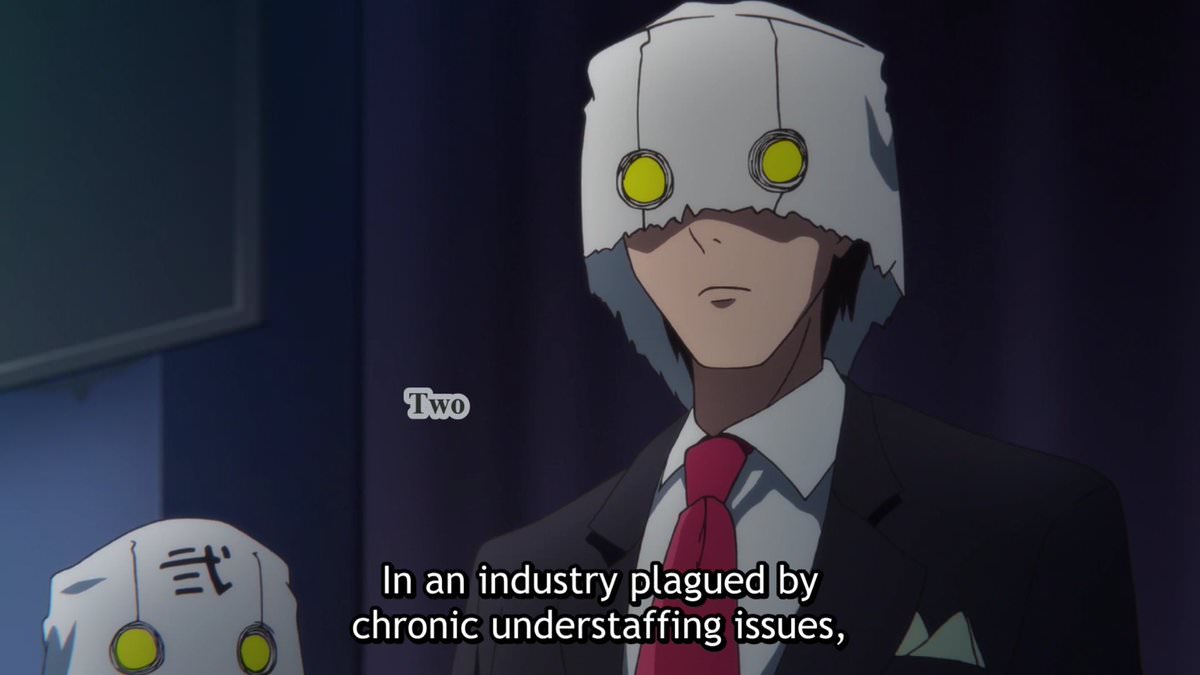 …Right… It gets weirder. A storyboard artist, while playing a mobile game that might or might not be Pokemon Go falls into a lake, fuses with an ancient energy and turns into a giant Godzilla-esque monster called Chizilla and is threatening to wipe out the town of Suginami where 70% of Japan’s anime shows are produced. 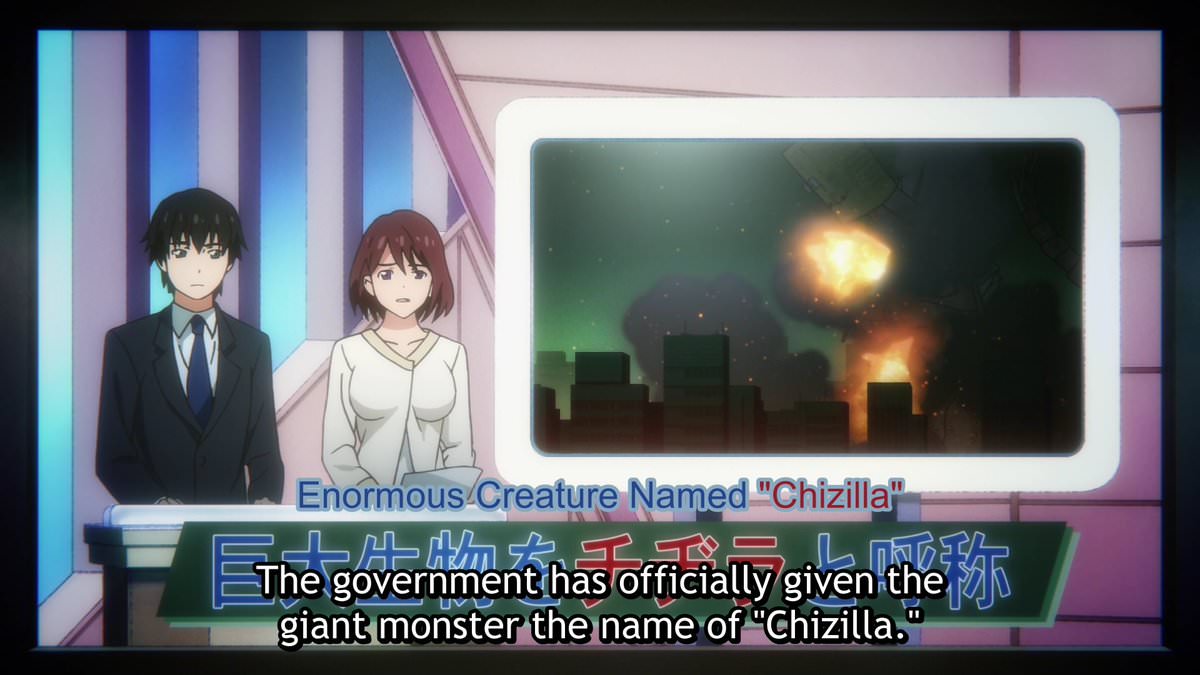 Wut. And so Cyborg and his 5 identical copies go to the Japanese government to get money to help complete the animation on the episode the guy was working on before he went all monster-sized in the hopes that it will appease him and thus save anime.

I’m not sure what to think or say… Hey, I was just as confused as you were. 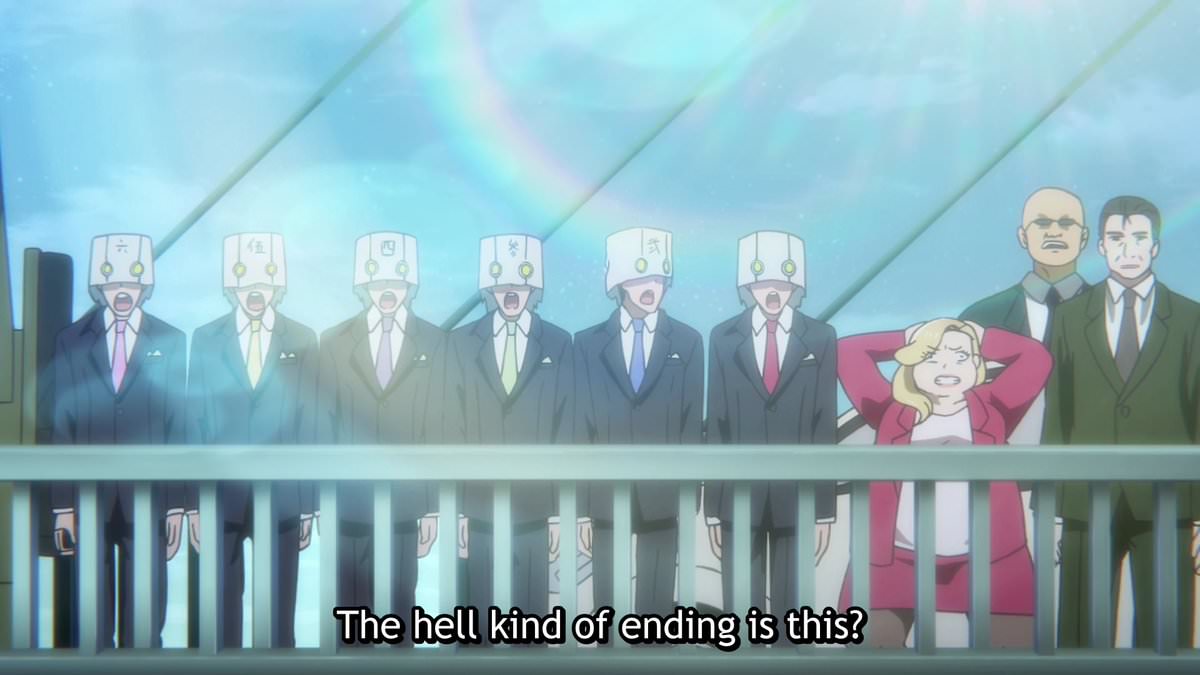 So what did you want to say about this episode then? Well, they way I see it it’s one of two things. Either this was a self-indulgent, high-concept idea that didn’t hit its mark or it’s the most brilliant, scathing take-down on the inner-workings of the anime industry yet. Or maybe it was both, or neither, I don’t really know! 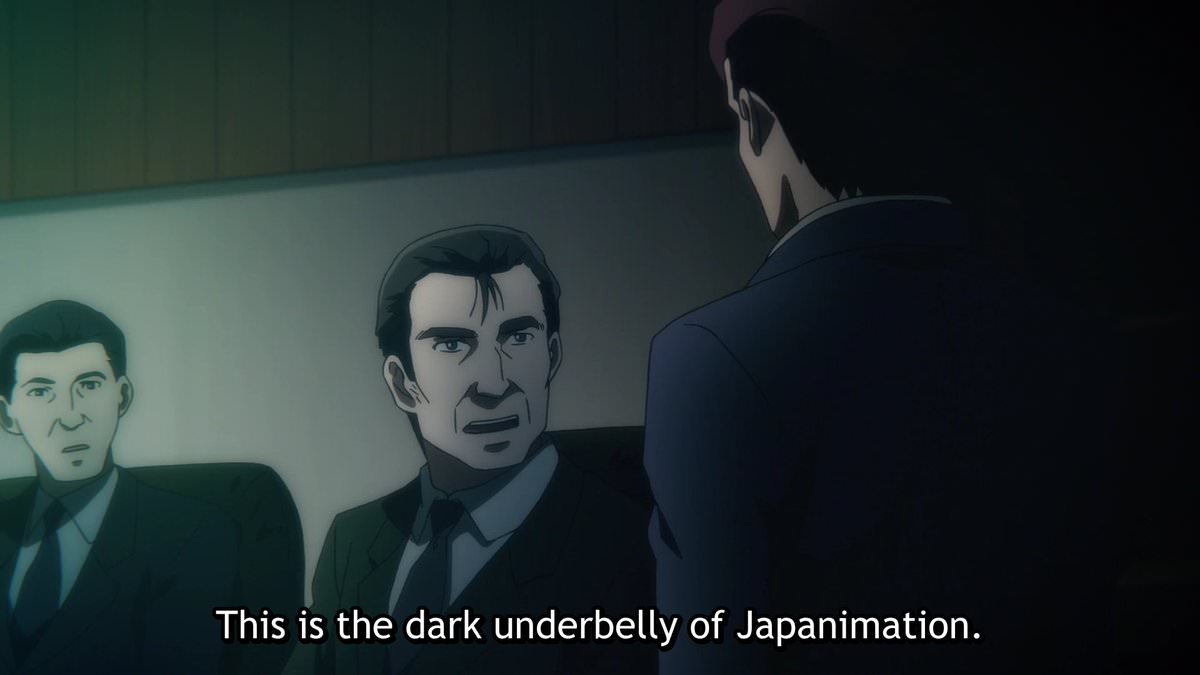 Uh-huh, so it has a lot to say it just doesn’t know how to say it? Again, I’m not sure! Comedy and especially parody is always a good medium for taking shots at controversial subject matter or at a problematic industry (South Park, regardless of your opinion on the show itself, has been doing it for years). But as much as this particular episode talks a lot about a lot of different things in the Japanese animation industry, from scheduling and budgets and staff issues and outside contractors and foreign studios, it doesn’t take enough of a hard stance one way or the other to really make an impact. 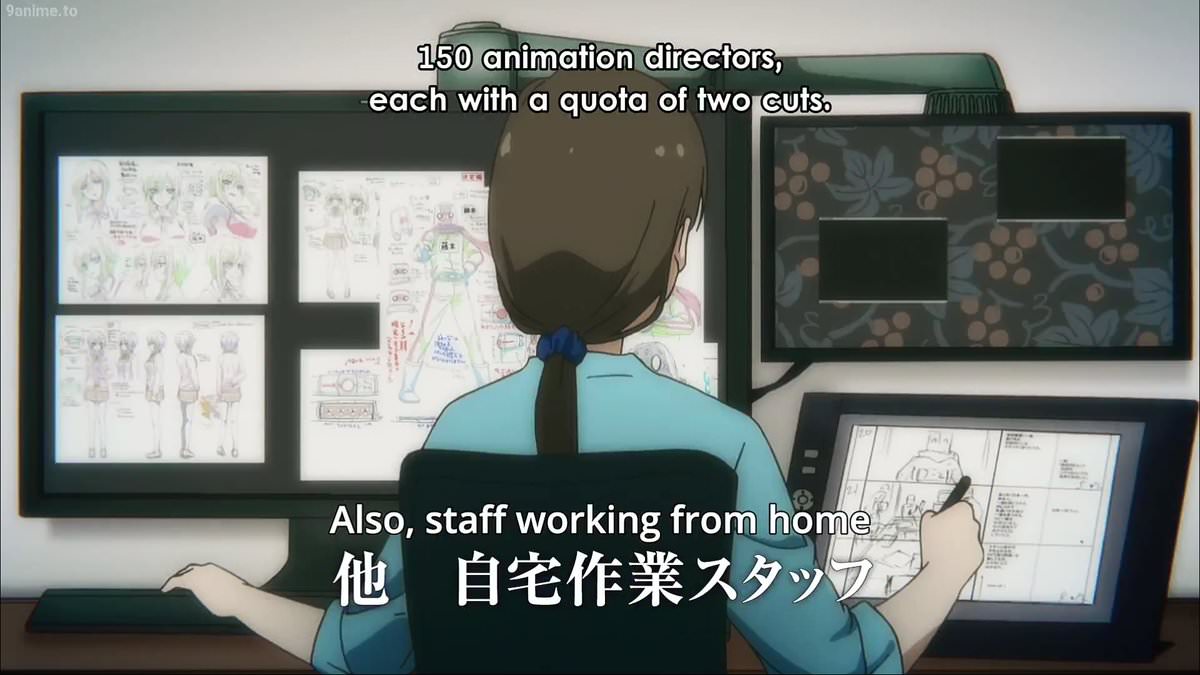 Why do you think that is? Well this isn’t an independent anime, it’s made by a fairly big animation studio, and I think the Japanese are too polite and too appreciative of their jobs to ever truly speak out in such a defiant way as making an episode that’s especially scathing of working conditions and other issues in the anime industry. Which is fair enough, people in this industry still love anime and it’s hard for them to speak out. But this feels less like a middle finger and more like a tongue-poking out emoji. 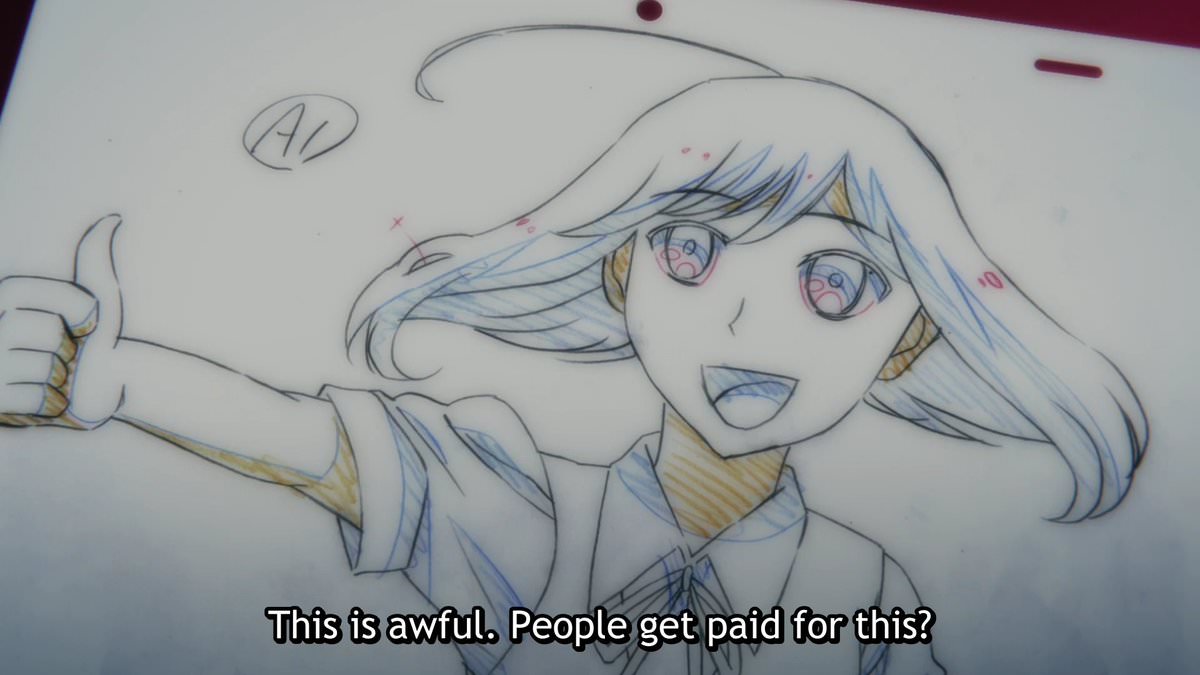 So where does that leave the episode? It’s still a fun and funny episode, even with an absolute minimal of scenes from the main girls/boys. I’m not sure if it’s going to be business as usual next episode, I’m honest not sure what to expect anymore because apparently this show has no rules, which for someone like me who loves when things get weird, makes me very happy. I’ll reiterate a thought I had with the previous episode that this totally feels like an Adult Swim show, the fourth wall doesn’t exist, either does logic and sometimes that’s a good thing and sometimes not, either way it’s still interesting. 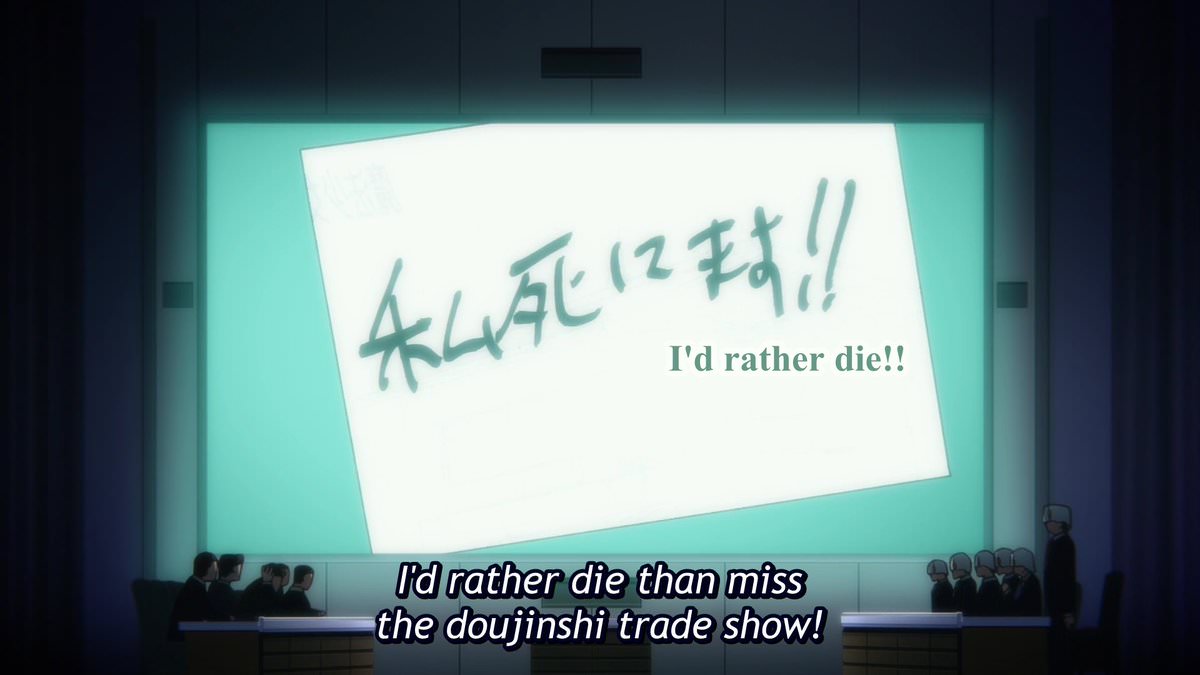 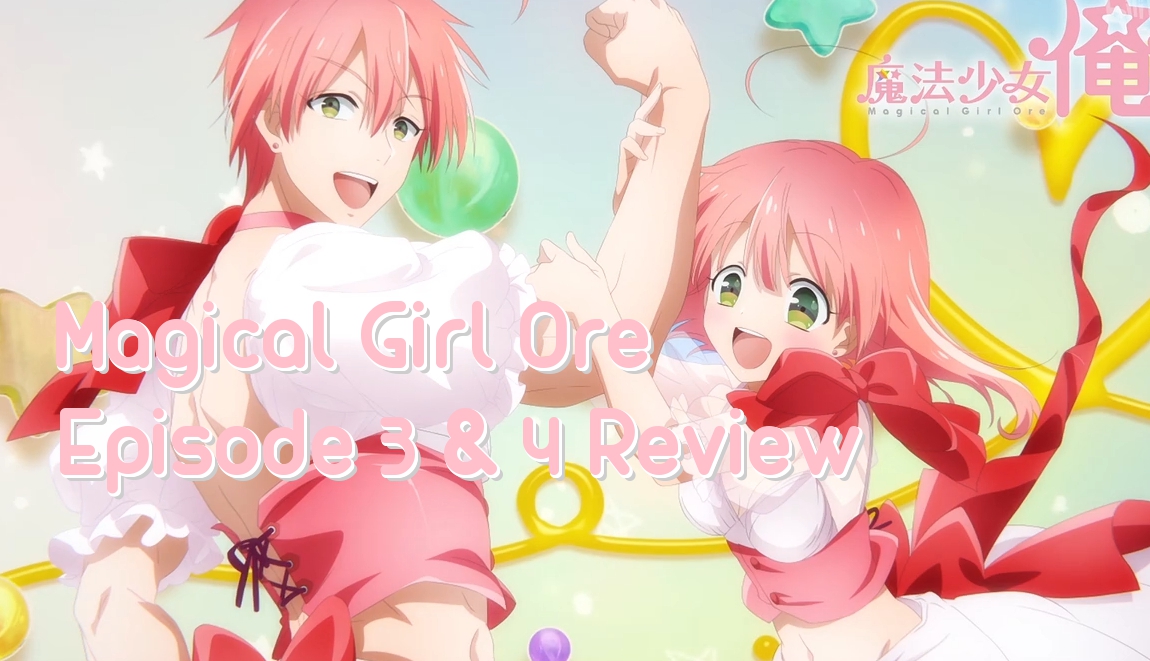 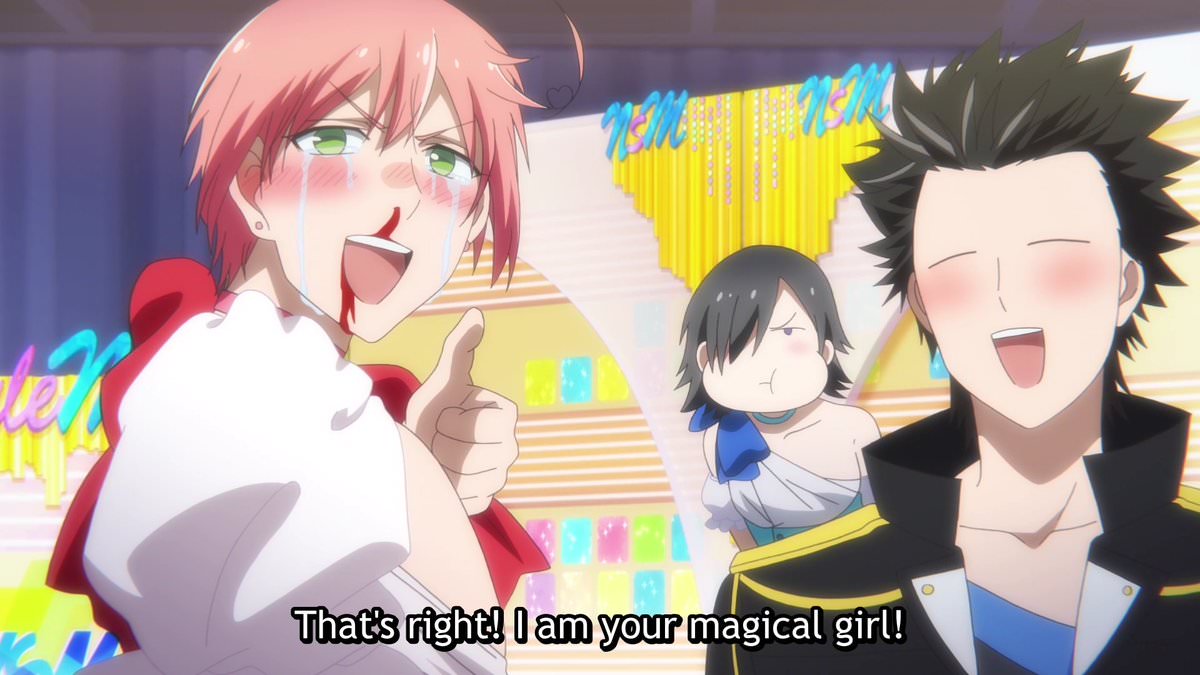 Uh-huh. So what’s new with these next two episodes? Not a whole lot to be honest, like it’s still funny, maybe not as funny as the first two episodes, but the pace is kind of irritatingly slow. I have to assume it’s intentional because everything else this show does seems so deliberate that ~maybe~ it’s a parody of the kind of prolonged pace of actual magical girl anime, I haven’t really seen enough to be sure though! 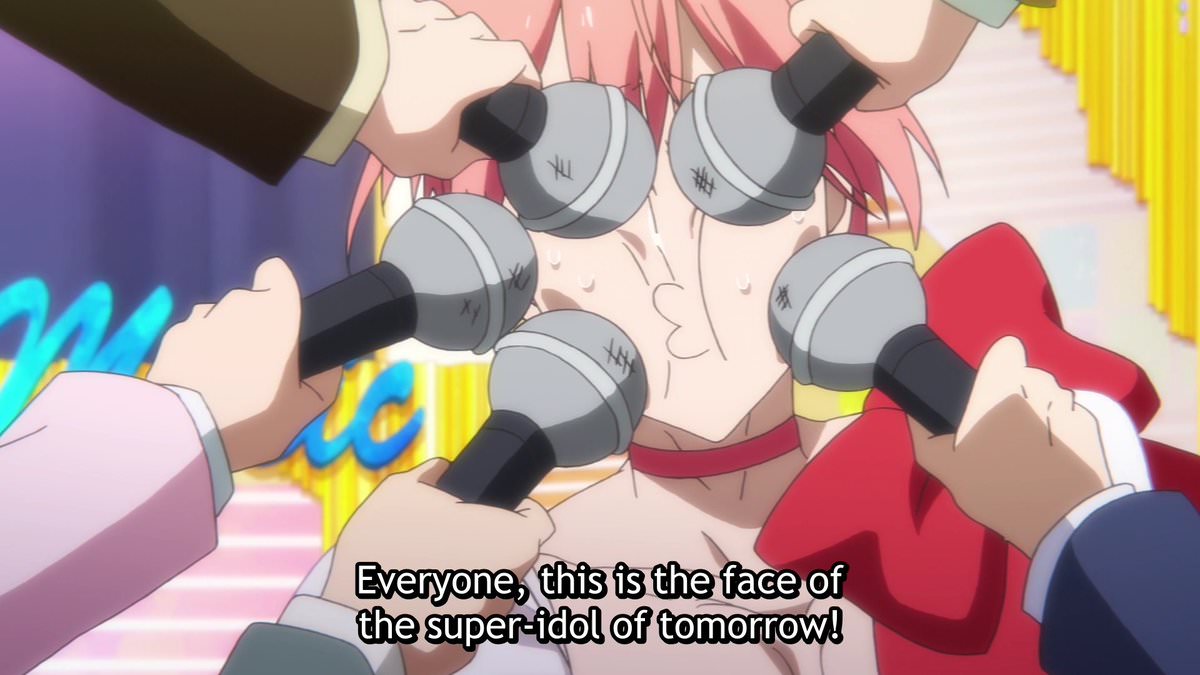 Poor pacing, what else? They introduce an “antagonist” of sorts in episode 4, called the ‘Cyborg’ he is also irritating but in a different way, the way he talks and his character design kind of reminded me of an Adult Swim cartoon. Makes me wonder if he’s not supposed to be a parody of magical girl “antagonists” too. 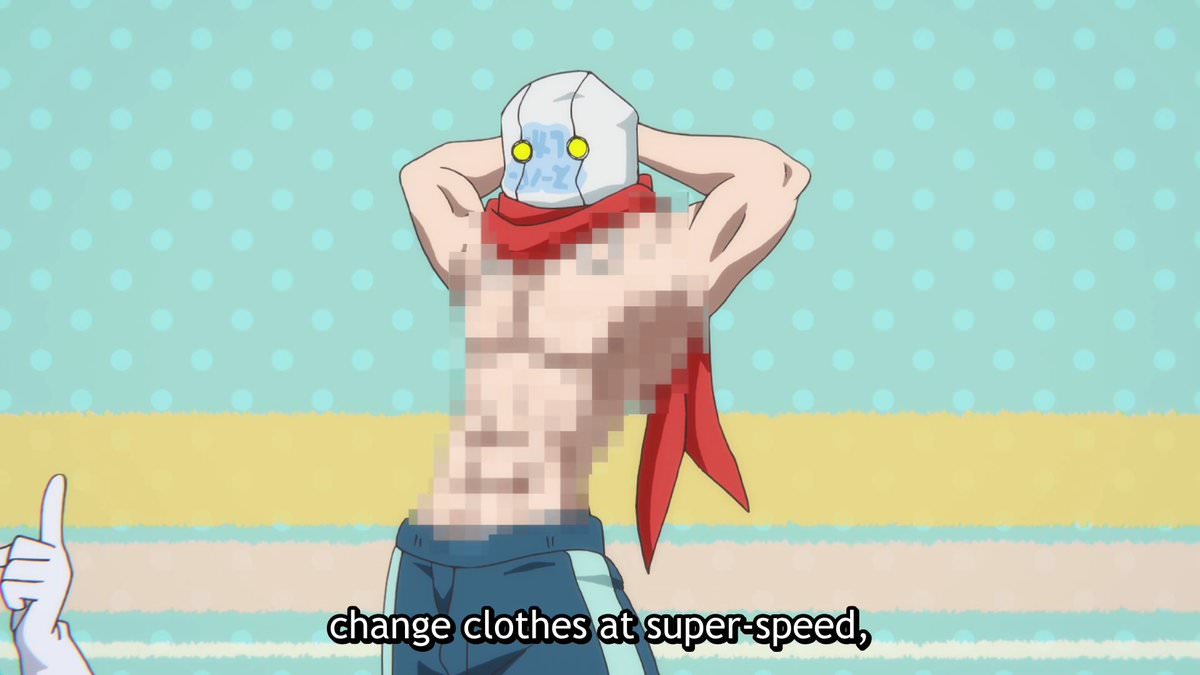 So in other words you’re not sure at the moment whether this show is being a deft and clever parody or is succumbing to lazy writing and poor pacing. Pretty much! ‘Tis part of the problem when you watch a parody of something while not being intimately familiar with the genre being parodied!

So anything you did like about these next two episodes. I love the fact that Sakuyo is so into Saki like more than romantically like she’s DTF with her best friend. There’s a moment in episode 3 where the two girls, in magical “boy” form are interacting and Saki says “is this BL, I don’t know what this is?” or something to that effect and I mean yeah, exactly! I don’t know what this is?! I guess it goes to show that gender isn’t something that should ever get in the way of love, which is obviously a spot on *chefs kiss* message but I wonder if that’s the message they were going for if they just thought it would be funny. It’s hard to say given the comedic nature of the entire show, but I’d like to think they were going for something progressive. 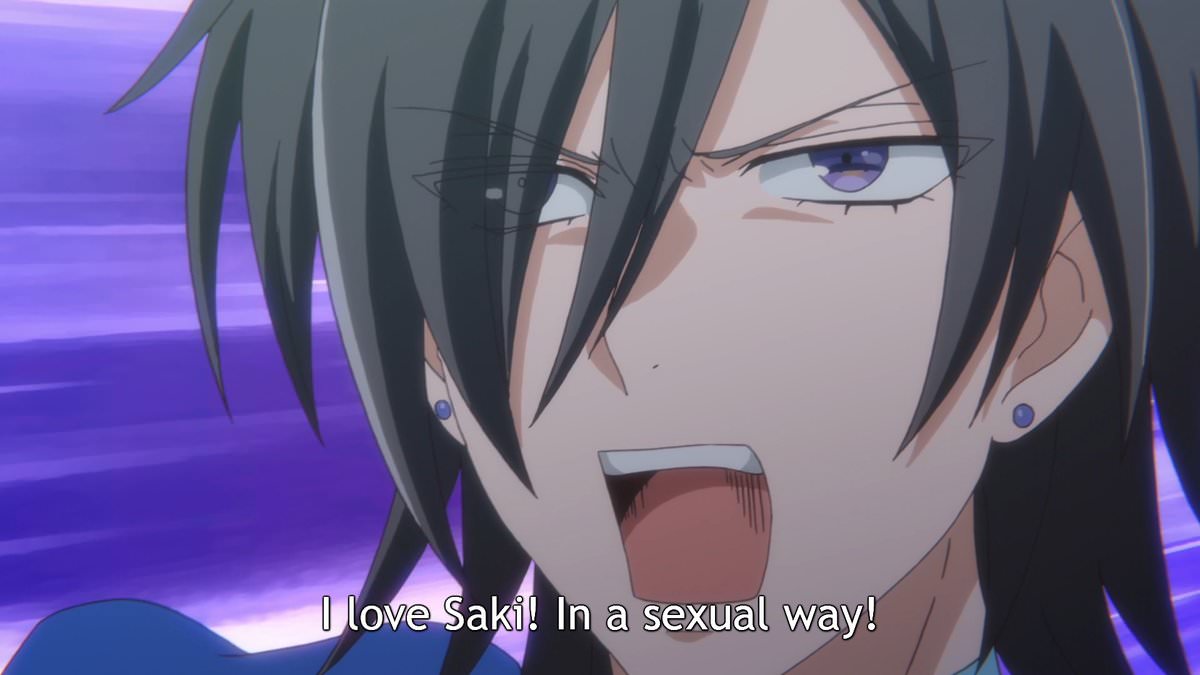 Right. So you’re still on board with this crazy show? Yeah, I mean issues not withstanding (and they might not even actually be issues, if they were intended) I’m still interested this show, it’s a fun comedic romp and I want to see how—if at all—the complexities of this 3 dimensional gender-bending love triangle will be resolved. Also, episode 4 gives us some hints that there may be some other magical girls in this world and I’m interested to see if they have ‘unusual’ transformations too! 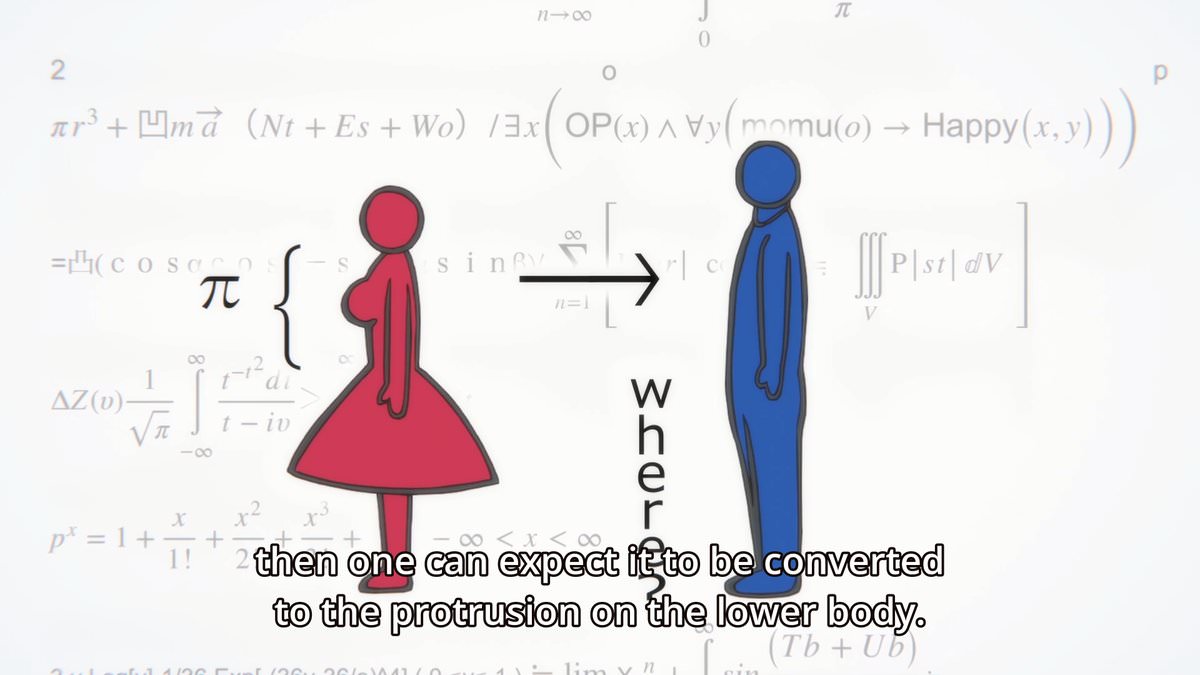 An Anime QandA review for Magical Girl Ore Episode 1 and 2.

Or what? Or else!

Okay but seriously what’s the show about? It’s about aspiring idol Saki Uno, who swiftly learning that not only do magical girls (like in the anime sense) do exist, but her mother was one too and that in order to save her crush she must become one! She signs a contract with Kokoro her “cute” mascot, who’s actually a Yakuza brute and what ensues is madness and hilarity of the highest order as Saki’s magical girl form is actually a tall, muscular man adorned in a tight-fitting, pink uniform. Whom her crush, Mohiro (a popular and successful male idol) promptly falls for.

Seems like you summed it up pretty damn succinctly… So here’s the thing, this show is obviously a parody of magical girl anime, but it’s also so well written that it never feels like it’s taking cheap shots at the original subject matter. Also, this is very much a comedy, like I don’t think I’ve laughed so much during a new anime this year as much as I did when watching episode 1 of this show.

And the other characters? Yes, of course there’s Sakuyo, who is Saki’s best friend and fellow aspiring idol, she’s also Mohiro’s younger sister! And she also happens to have a crush on Sakuyo!

Ooohh~ things are getting complicated! And it’s about that time when these two first episodes end, and it’s a decent tease of what’s to come, I admit I am thoroughly intrigued to see where it goes from here!

Well, I know you don’t score individual episodes but what how do you recommend episode 1 and 2 of Magical Girl Ore? Easily, in fact there should be nothing to stop anyone from watching this show. Sure there’s a bit of homo-eroticism, and I’m not exactly sure how much it’s going to lean into it going forward but even if that’s not your thing I think this is a show that deserves a watch by even the most jaded and steadfast of anime fans. Great characters, great comedy and just a great time.

***Let me know in the comments what you think of this shortened review format, I’ll only be doing these for single episode reviews of the spring season, the normal 20 Question Reviews will still be posted for full season reviews***