Things still progressing in a satisfying manner? That’s an understatement! This show is amazing!

Not even going to bother with saving ‘final verdicts’ ’til the end are we? Sorry, it’s just sometimes you watch something that’s destined to be a classic and you have to almost pinch yourself at the kind of achievement that you’re witnessing.

Sounds a lot like you’re just caught up in the hype to me. Oh I’m sorry, are you the one watching Steins;Gate 0? No? Then stick to asking the questions!

Fine, I’ll word it like a question. Don’t you think you’re letting hype cloud your judgement of the series? I’m not getting caught up in anything other that witnessing the impossible, namely a sequel anime series successfully meeting and possibly exceeding the ludicrously high standards set by a critically lauded and fan beloved predecessor.

Isn’t it a bit early to be making such proclamations? This is only episode three! I’m willing to look a fool if I’m proven wrong by time, but right here and right now, I’m calling it like I see it!

Fine. So what happens in this episode that’s got you so jubilant? It’s not what happens, it’s how well it happens. Simply put Okabe is getting too attached to the AI version of Kurisu and people close to him are starting to notice (namely Mayuri and Maho). Also there’s a Christmas party. If I put it like that it sounds like not a lot happens, but it’s the way this show deals with its topics and its characters, it’s like watching a master craftsman at work. There’s just so many great scenes in this episode, so much character development, especially for Mayuri and there’s a heap of charming and funny moments, especially at the Christmas Party! It’s soulful and intelligent and just impossible to not get caught up in. Kind of like how Okabe gets caught up in this artificial version of Kurisu.

How do you mean? It’s all about the comforting illusion, the solace in reliving something that’s long gone, rather than confronting the harsh reality that all that remains is a pale imitation. Okabe wants so much for Kurisu to be alive again, and for the viewer it starts to feel like the old Kurisu too, the more Okabe interacts with her the more her trademark spunky personality comes out. It’s only when Maho turns off the screen at the end of the episode does the reality sink in. She is dead, and nothing’s going to bring her back. Or is she?!

Huh? You did this last week too, what do you mean? The final moments of the episode have Okabe enduring one of his flashing visions, what does it all mean? We get glimpses of violence and sadness and lots of different faces, is it past or is it future? Whose world line/s are we seeing? And what does this mean for Steins;Gate 0 going forward! So many tantalising questions and I can’t wait to see how/if/when they’re answered!

And what’s the show got in store for you this week? FEELS.

Feels? As in feelings, you know emotions? Jeez, how old are you?

Sorry I’m not hip to all the internet lingo! So it’s an emotional episode then, huh? Continuing directly on from the previous episode, Okabe is at the Artificial Intelligence conference where Amadeus, an AI program made from a person’s memories and emotions is being unveiled. After an impassioned outburst, an awkward after party and a touching scene between Maho and Okabe, he finally comes face-to-face, or rather face-to-computer screen with Amadeus, the AI program in testing phases comprised of the memories and emotions of the deceased Kurisu. 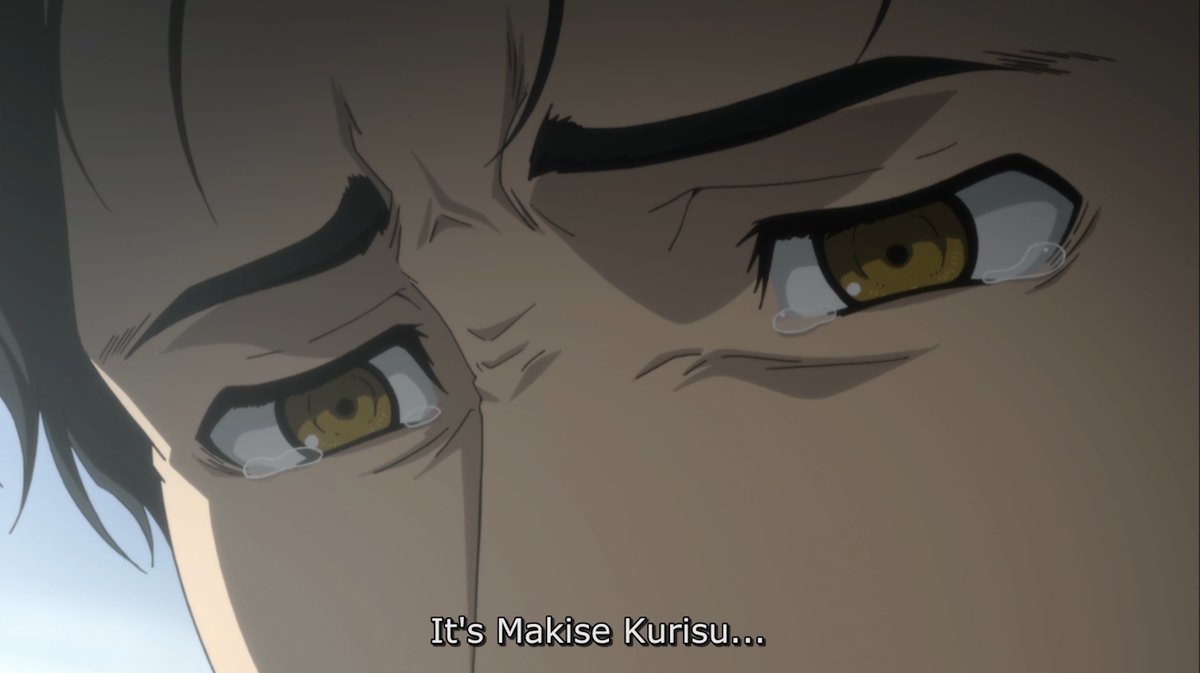 Well that’s certain to be an emotion charged moment. With just a look we can tell exactly what Okabe is feeling in this moment, it’s beautiful and heart-breaking. The fact he’s looking at and able to talk to someone he loved as if she were alive, even though she’s very much not. Or is she?!

What do you mean ‘or is she?!’ She’s dead, right? Her physical body is for sure, but ask yourself what is a person, what defines something as being alive? Everything that comprises our life; our hopes, our dreams, our memories, our loves, our pains, our relationships they’re all stored in our mind. They exist as information, so just because the human body ceases to be, who’s to say that the a perfect digital approximation of a once living mind with all the emotions and memories in tact isn’t ‘alive’ too. Just a different kind of life. 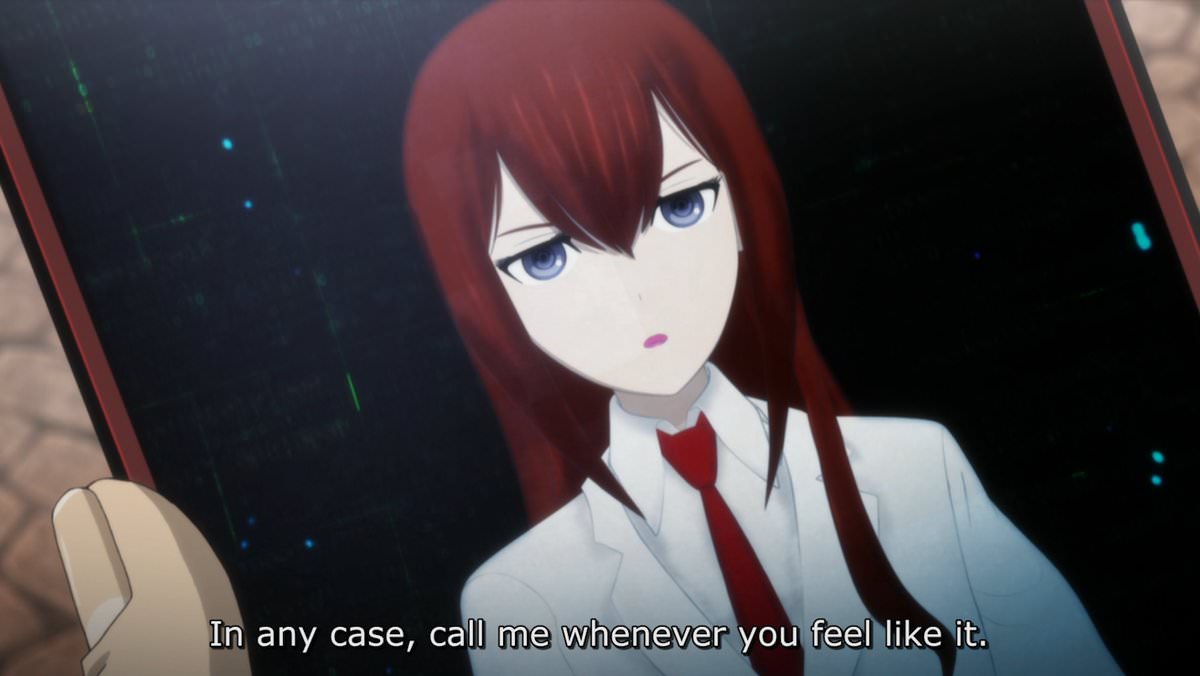 Wow… that’s deep, I’m surprised you came up with that and nary a mention of boobs or cute girls. Hey! I can be deep too sometimes!

So it’s a thinking person’s anime? Steins;Gate has always been like that, and it’s at its best when it can marry heady near-future science fiction concepts and morality exercises with raw human emotion and genuine relationships. And I know it’s only Episode 2, but I’m already fully invested in this series, and I don’t just mean because we’re dealing with characters we already have come to like from the first Steins;Gate series. I mean I’m invested in this story, in the story of AI Kurisu and what that means for Okabe and the rest of the characters new and old alike! 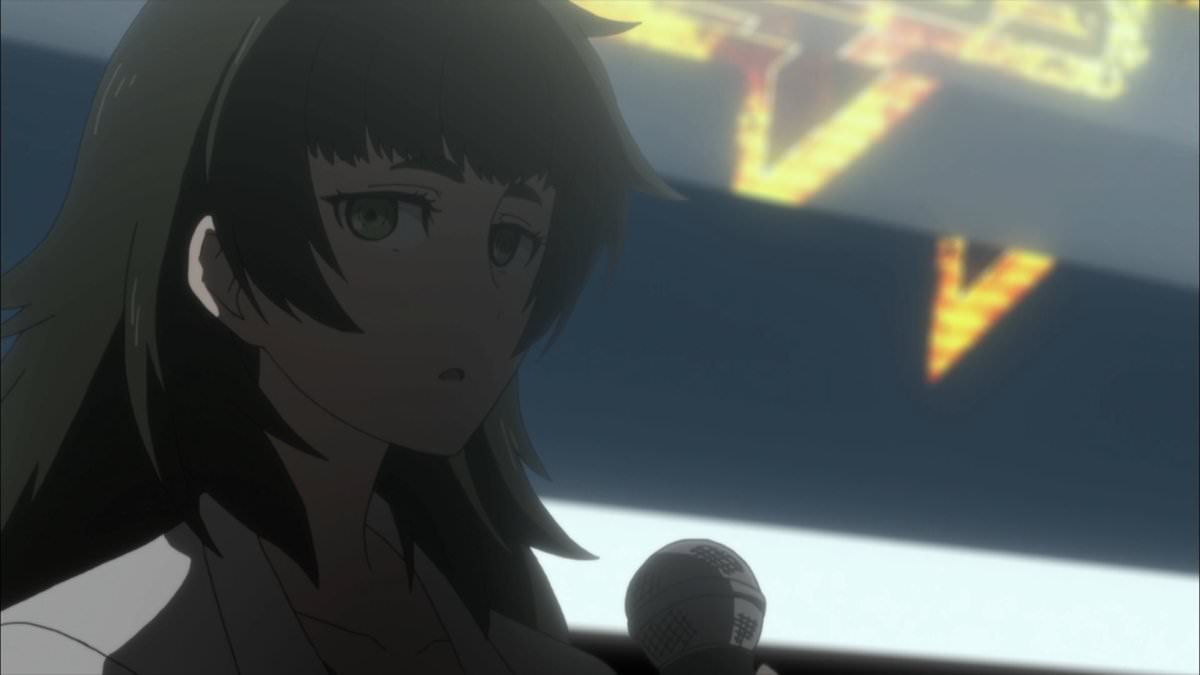 Anything else you want to add? Originally I was going to wait to watch this in English dub like I did the original (I know, I know) but because it’s coming so late in the month I couldn’t resist watching it in Japanese. I’m not going to speak about what voices I like and which I don’t that doesn’t matter, what I am curious about is how they’re going to dub the American professor Leskinen, who frequently speaks whole sentences in English (which Okabe can’t really understand well) and some sentences in awkwardly spoken Japanese. Seems like something they’ll either have to work around creatively or just ignore, either way it does make me glad I decided to watch the sub first. 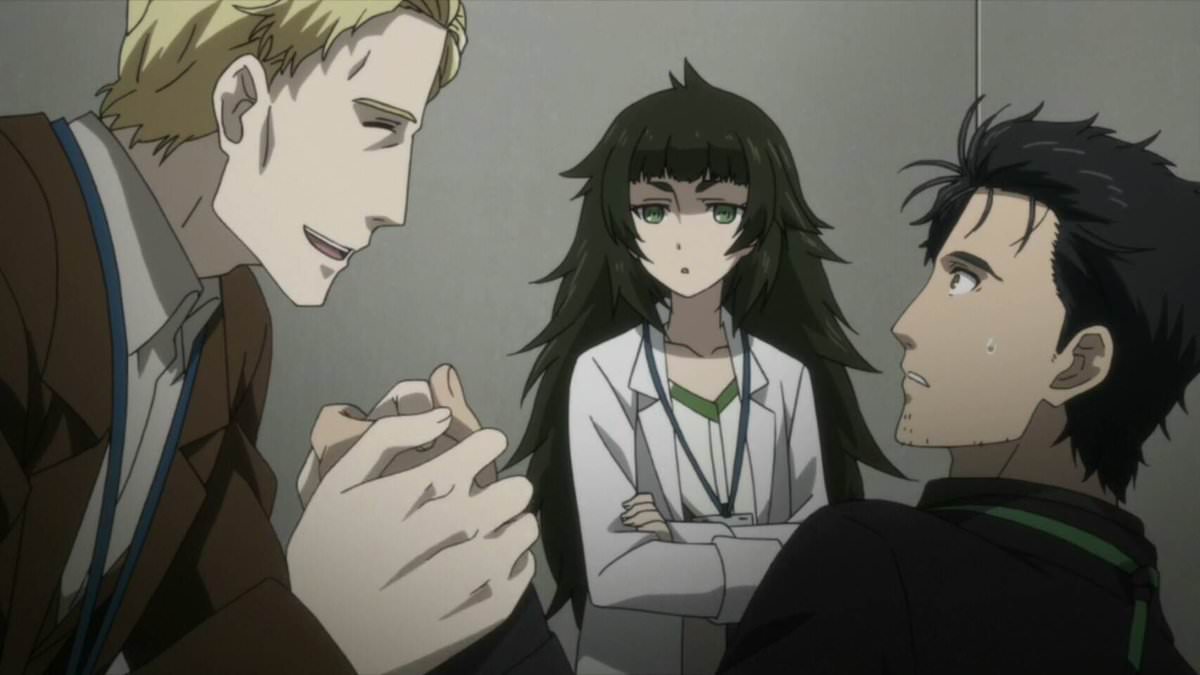 Fair enough, so still on track to be one of your favourites of the season? I don’t like calling things this early, but seeing as I’ve now watched the first (and in some cases second and third) episode of every show I intend to watch this season, I’d say it’s easily among the top 3 and I am reasonably confident they can keep up the quality, the intrigue and yes even the feels. 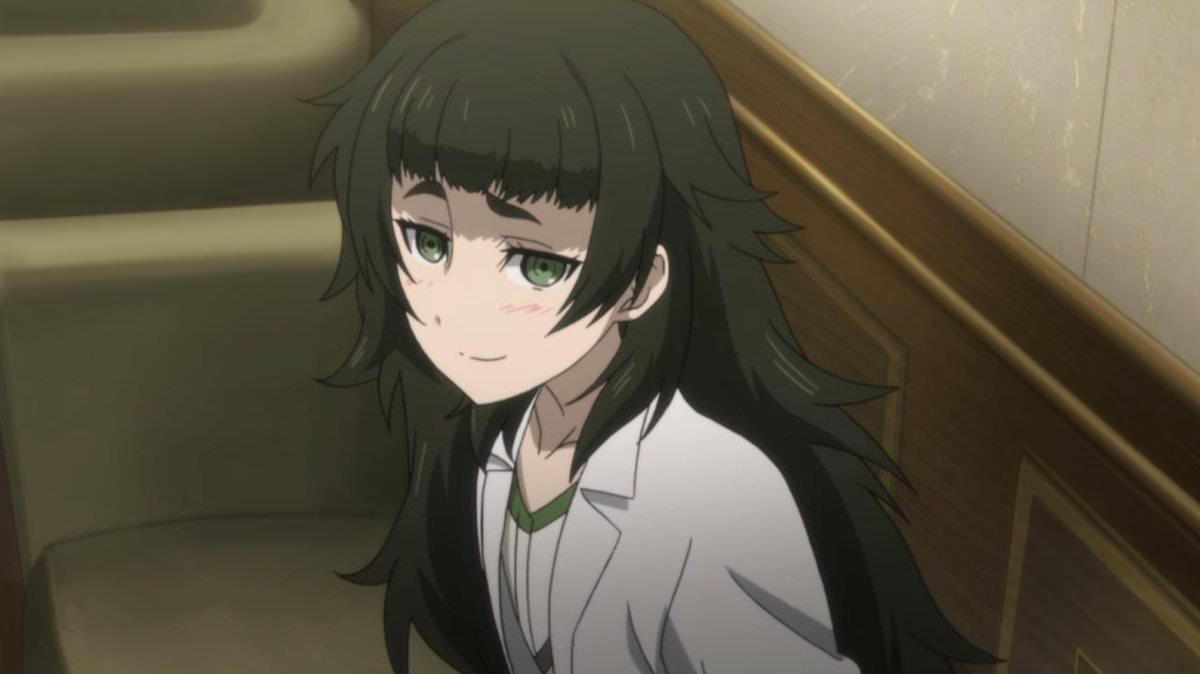