So I take it we’re at the penultimate episode? Yes, sadly, we’re almost at the season finale and all I can think of is how much this show has grown from where it was, I’m like a proud parent who has watched his child blossom from a cute anime girl to a cute anime girl with a lot of deep character development and introspective narrative.

I’m sure that sounded better in your head. So what’s this episode about? As I recall the last few episodes were kind of a bit weaker than the show at its best. To be fair this show at its best is better than nearly everything out there so even at its weaker moments–not counting the first couple of episodes–this show is still excellent. This week however, perhaps sensing that melancholy and channeling it we’re given an episode that trades in a lot of the usual comedic qualities for something more nostalgic and contemplative.

You still haven’t said what it’s about… The girls have to fill out their career forms, a.k.a pick three careers they want to consider for the future. Naturally this leads to Kaos-Chan doubting her potential and the others nervous about what kind of future being a mangaka can be in the long run. Meanwhile the Dorm matron has some unfortunate news to break–the manga dorm is to be closed at the end of the year.

Oh! So do the girls band together to try and raise enough money to save the dorm?! Nope, they help the Matron clear out the storage room. It’s all kind of sad, but in the best possible way–after all change is a great catalyst in this world and can bring new things!

I feel like you’re setting me up for something so I’ll bite, “like what?” Inspired by some motivational graffiti in the storage room–written by one of the previous inhabitants–Kaos buckles down and works hard to complete not one, not two but four manuscripts for her editor to read! 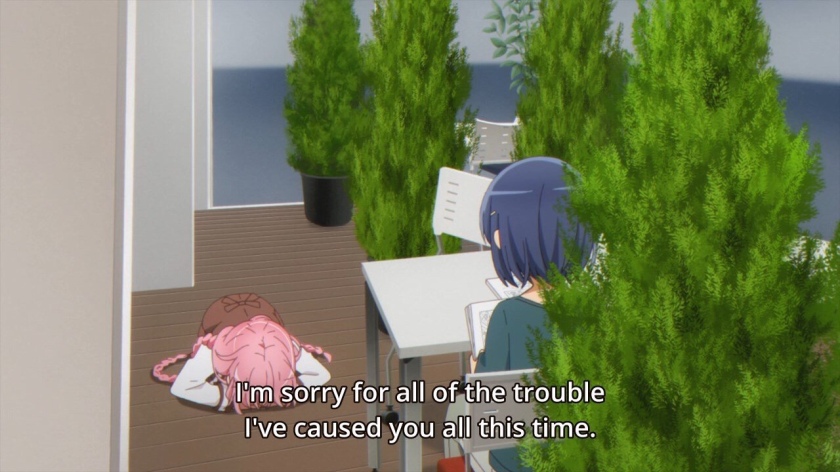 And how’s that go? Most of the comedy in this episode comes from this scene towards the end of the episode as her editor is her usual brutally honest self about the ~mediocre manuscripts~ Kaos has turned in–that is until the last one. It’s a manga with personality and wit and charm and heart. It’s something she just threw together when she didn’t know what else to write… it’s a little story about female mangakas living in a dorm together and it’s called Comic Girls!

Hmm, didn’t you predict a few episodes ago that her big breakthrough would be writing a manga about her dorm life? I did, I’m surprised you remembered but yeah it makes the most sense in the context of the narrative and as contrived as it may seem to an outsider it’s such a sweet and well-earned moment when Kaos finds out she’s going to be published in a magazine I couldn’t help but shed a tear–as I’m sure I’ll shed a many more next week in the finale! 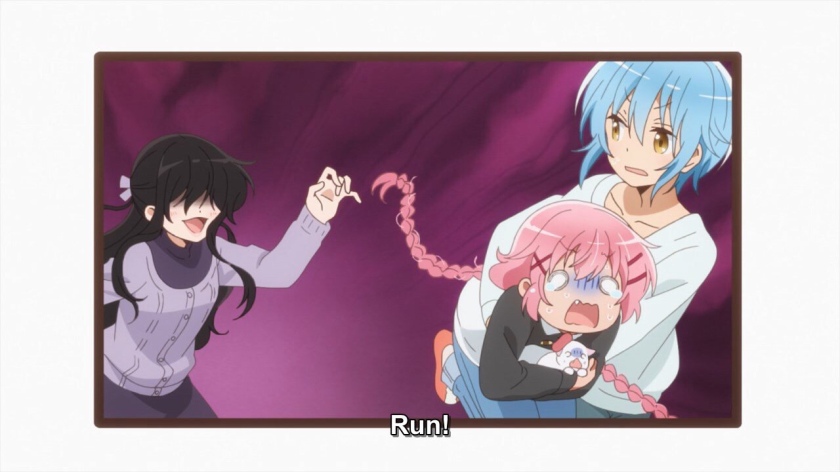 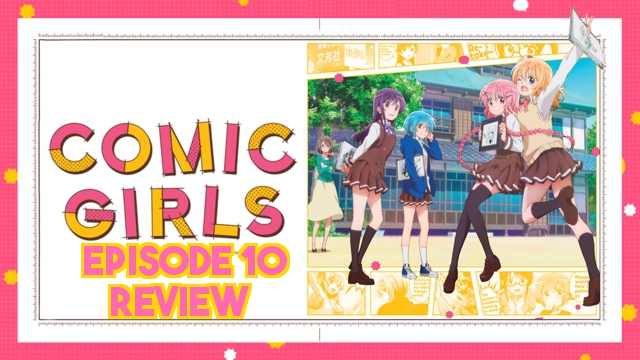 How are the things in the dorm this week? About the same as last week quality wise. Albeit with an unexpected bit of character development on the part of one character.

So not peak ‘Comic Girls’ but not a slouch of an episode either? Pretty much.

So what’s the episode about then? Well it’s Christmas! And everyone’s excited—well everyone but Ruki—see she hates Christmas because in Japan Christmas is a holiday for couples to do lovey-dovey things and Ruki wants in on that romance, but alas because she’s in a CGDCT show she’s destined to be forever single. So she wallows in her own love-less life for a bit, the others attempt to console her until Kaos manages to cheer her up with a somewhat inappropriate Birthday gift—oh and her Birthday is on Christmas Eve.

And everything’s back to normal after that? More or less, this first segment kind of felt a bit more filler-y than the average episode but it was still very funny. The second segment though amped up the character development, even if it was a bit of a rushed reveal.

What’s the second segment of the episode about? Well, after Kaos’ plans to return home for New Years are scuppered by her parents winning a trip to Hawaii, Kaos—after much cajoling—tags along with Tsubasa to visit her parents. Except Tsubasa’s whole tomboyish aesthetic and mangaka ways are something of a secret to Tsubasa’s family—namely because they’re crazy wealthy and live in a mansion and expect their daughter to be a ‘proper lady’.

Ah that old chestnut. Normally I don’t go in for these kinds of character revelations but I think it was done well, if slightly rushed. The idea of going back home and feeling your own sense of self disappear as you revert back to how your parents want you to act is perfectly captured here. (Also Kaos not knowing how to be in any way ‘fancy’ was consistently hilarious) And though it’s rather quickly resolved, I get the feeling that it’s because they wanted a third segment at the end of the episode, but then again maybe it’s exactly like this in the manga too?

A third segment? That’s unusual isn’t it? Some episodes have them but they’re usually a lot shorter than this. After returning from Tsubasa’s we get a shrine visit where Kaos-chan’s luck takes a beating followed by a ceremonial ‘cooking of sweet potato on an open fire made up of failed manuscripts’ ritual back at the dorm. It’s actually a really great and kind of touching scene that makes me forgive them for short-changing the second segment.

Right. So still standing by the claim that this is one of the best CGDCT shows out there? Absolutely. At this point, nothing short of a catastrophic failure in the last three episodes would change that, hopefully I’ve got better luck than Kaos-chan and didn’t jinx it!