Japan—it’s the reason anime even exists, and undoubtedly there are things so inexorably linked to the Land of the Rising Sun that they can’t help but feature prominently in their abundant animated media. This is a list of the 10 Best Uniquely Japanese Things About Anime (in my opinion). These aren’t specifically anime clichés more that these are things intrinsically linked to Japan as a country, as a culture and its people that have seeped into anime. Also true about this list is that these things might not be 100% ‘Japanese-Only’ things, it’s just these are the kinds of things that feel unique to both Japan the place and the anime the art form, so don’t be surprised if you see some picks that might be applicable to your country too! With that out of the way let’s begin the countdown!

Seems like nearly every school based anime has the protagonist starting school as the pink blossoms of the Sakura tree fall around them. It might seem like an overworn cliche but there’s a reason for it—in Japan the new school year starts in late March/early April, exactly when the cherry blossom season starts. Still, there’s nothing quite like the flittering of discarded Sakura petals over a scene to make it feel ~distinctly~ Japanese.

I wondered whether or not to include this lest I step on any toes, but it’s something I’ve seen far too many times not to at least mention it. Japan, a mostly Buddhist country has had an ~interesting~ relationship with the Western Christian faith. Excluding my personal opinions about Christianity and organised religion on the whole I’ve always found it funny when a character is either ~vaguely~ Christian, you know, wearing crosses and celebrating Christmas, or alternately when the main hero/villain of the piece is affiliated with some ass-kicking branch of the church that has seemingly little to do with anything actually religious and just wants to use the iconography for the fun of it. And why not I say!

Something that also falls into the “quaint” category is seeing things such as someone speaking back to an elder, or someone heedlessly discarding some trash to the sidewalk, or someone just being a general rebellious sort being treated as a big deal. By which I mean, “watch out, this guy/girl doesn’t care about the rules!” Sure this kind of thing happens in the West, but no one is going to mistake a loitering, litter-bug with a potty-mouth for the leader of a motorcycle gang like they might in Japan!

I can’t speak for what it’s like traversing the streets at night in Japan as a woman but there is a certain over-reliance on the trope that ‘women and children shouldn’t go out past dark because it’s dangerous’ despite the fact that Japan has the world’s lowest crime rate. Maybe this is my male privilege speaking but seems like it’s more dangerous to try and run from the shower to the bedroom in the nude without anyone seeing you than it is to roam the streets of Japan after dark. Somehow I think this is more about the Japanese paranoia that everyone has a dark-side just waiting to come out than based on any statistical crime-rate based fact. And these comments always seem to appear in slice of life anime where nothing bad ever happens which makes the comments especially out of place.

Every country has a rich food culture but for some reason anime and food seem to go together like Rem and Ram. The sheer quality of the food in Japan is something to behold and its availability in the cities especially is unlike any other. There’s a reason Japan has more Michelin stars than any other country on Earth and Tokyo more than any other city, it’s because they care about food as if it were their children. If you don’t believe me (or haven’t experienced Japan’s passion for food) just listen to the difference between the Japanese original and the English dub of Food Wars to see how passionate they are about something we all probably take for granted! Also falling under this category is school and work bento’s being things of amazingly high quality—especially compared to what amounts to a school lunch in the West.

~Number 5~
All Men Are Perverts!

I’m sure there’s some angry sort who’s sitting at home with their hands above the keyboard ready to type “NOT ALL MEN” into my comments page in relation to this pick and sure while I can’t pretend to speak for “all men” I think it’s a pretty safe assumption that a lot of men have a one-track mind when it comes to sex, the pursuit of it and the procure of it. And nowhere is that fact more apparent and more frequently highlighted than Japan and anime, where seemingly every male has his eyes on the prize and that prize being anything feminine with a pulse. And not just the intent and the obsession but the way they go about attaining as much as a glimpse of anything arousing certainly speaks to some ~interesting~ notions about pornography and reality in Japan that I have no intention of getting into right now…

It wouldn’t be an episode of a slice of life anime without some mention of anime or Akihabara or video games or anything vaguely related to Otaku culture in Japan! While this particular type of reference is perhaps not as prevalent as others on the list it makes up for it in sheer… obnoxiousness, yes I love it when an anime I watch starts referencing other anime or pays a visit to the otaku Mecca known as Akiba but it’s always a ~little~ bit obvious who they’re pandering to… and I don’t care because it gets me every time! Notice me sempai! 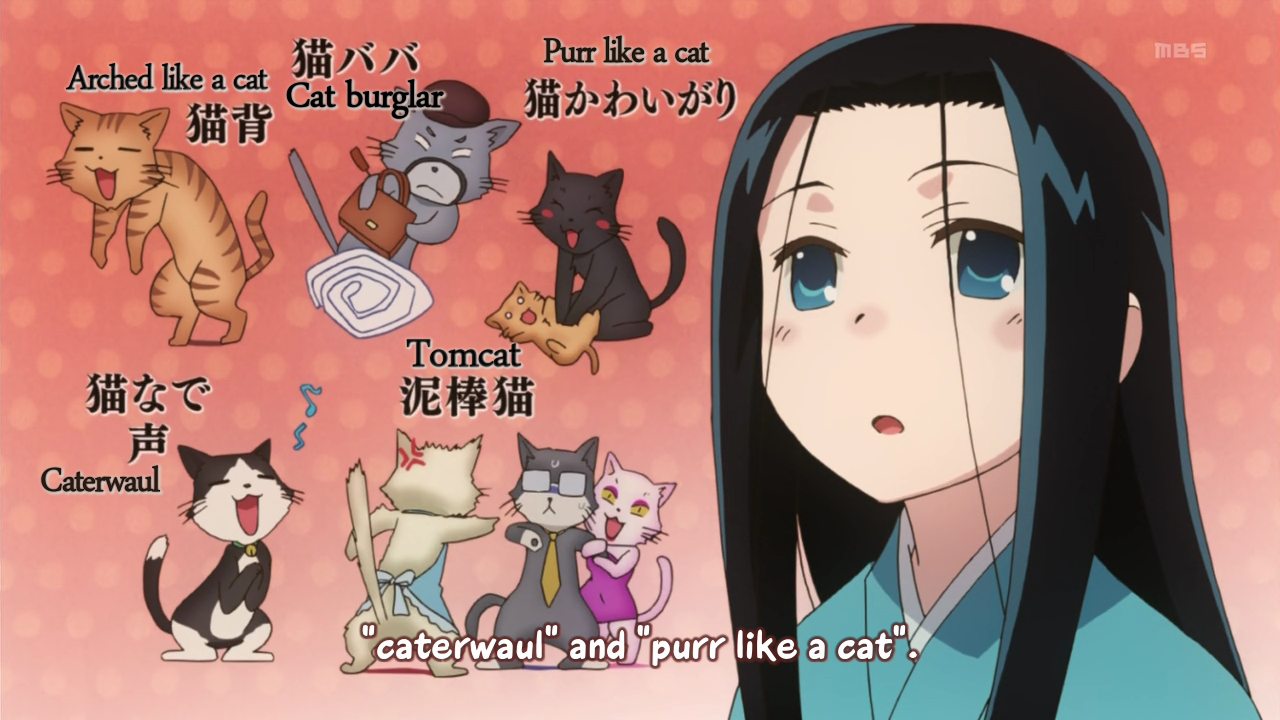 Nothing quite says an adaptation of a super-smart cloyingly pretentious anime like the subtitles attempting to translate a pun that’s derived from the composition of characters and how they ‘look’ like other characters hastily explained by a bracketed sentence midst a fast-flowing conversation. And what’s even worse is when there’s multiple of these so you’re either left to pause the show and read every explanation or just let it wash over you and home to gleam a semblance of sense from it all. Truth be told I don’t know why I ranked this so high, maybe because the Japanese language is so unique (and difficult) plus I guess I’m just a sucker for that pretentious wordplay, no matter the language!

I mean incest isn’t anything exclusive to Japan, as long as there’s been sister’s there’s been brother’s wanting to f**k them and vice versa (not to mention love between same-sex siblings too). But it seems like Japan’s always been ahead of the curve at least in the sibling seduction department which… I don’t know… is this a good thing or a bad thing…? I feel like I’m opening a can of worms inside a hornet’s nest and it’s probably best I shut my mouth lest I get stung somewhere sensitive… All I know is, when Game of Thrones was breaking mainstream taboos with Jamie and Cersei Lannister doing the deed in 2011, shocking the “normies” to their very core. Those deep into niche anime were sitting with copies of OreImo and Kiss x Sis wondering what the fuss was about. Does this pick make me an Incest Hipster? Is “Incest Hipster” the worst thing you’ve read all day?!

And before anyone asks, this choice isn’t me advocating real life incest. Nor is it at all meant to say that anime’s depiction of incest is without faults (like anything) it’s more something that I think is unique to anime.

~Number 1~
School Clubs are the Best!

Ah… something wholesome to wrap this list up with, what after all that talk of perverts and incestuous couplings! The school clubs as seen in anime have always been something of an enigma to me, as high-schooler growing up in Australia not only was I unaware of any extracurricular clubs that sated my interests but likewise I didn’t think they existed at all. But in anime (and presumably, by extension in Japan) after school clubs are practically half the reason to go to school more even if you have a disdain for classes! The idea of spending more time at school while simultaneously interacting with likeminded individuals seems like a strange dream and yet nearly every school-based anime has mention of an after-school club. I don’t believe in reincarnation, but if I did I’d want to reincarnate as a Japanese kid just so I could experience this world of after-school clubs for myself!

And with that we’ve reached the end of the list, think I missed anything ~particularly~ Japanese about anime that should have been on the list? Leave me a comment below! Until next time, watch out for men… they’re all perverts remember!