Okay… and what’s it about? It’s about cute girls exercising!

You do this a lot where you pretend a show is just about one facile thing for the sake of making a comedic point. This show’s about more than ~just~ that, yeah? Nope, it’s 12—four-minute episodes showing five different cute anime girls doing exercises in their respective bedrooms (and occasionally elsewhere) and the audience observes as they stretch and moan and sweat.

That…sounds…creepy… Here’s the thing about this show, it’s simultaneously the most and least creepy fan-service I’ve ever seen.

H-how can that be? That’s like saying something is the most funny and least funny—that’s impossible! You want to give me a minute to explain?

Right, sorry, go ahead. Well here’s the deal, 90% of this show is watching girls (between the age of 14 and 17) exercising and there’s no denying there’s something seedy about how the camera lingers on the girls as they count out their routine. The viewer always has the most sexualised angle on these girls and it makes no mistake that this is the content it’s choosing to focus on, fetishizing girls who are working out and getting sweaty.

Uh-huh that does sound quite creepy, so go on try and convince me how it’s simultaneously the “least creepy fan-service” as well… (This’ll be good). In my opinion the show finds a way around the creep factor—or at least rationalises it—because all of the fan-service is consensual. Which is to say as much as fictional character can consent to being objectified.

“Consensual” huh? Explain. Each of the girls directly address the audience frequently, not just breaking the fourth wall but talking to the camera as if it’s the viewing public watching from home. All of these girls have invited “the audience” into their homes to watch them train and to help the audience train too, and it’s kind of endearing and even—dare I say—cute.

Why do I have a feeling that your opinion is probably not going to be in line with the masses—especially your female readers? Your enjoyment of this kind of thing is probably dependent on a many number of factors. And you probably already know if you’ll enjoy this show from the synopsis alone…

And did you enjoy it? I enjoyed exercising along with the show more than I enjoyed the show itself.

E-excuse me? I’m almost afraid to ask what part of your body you were “exercising”…. Come on now, don’t be crude. I used the show’s short run-time to exercise on my stepper at home. Three episodes was just enough workout time to get a sweat up and feel the burn!—especially during the high energy theme song! It was a really fun experience!

Right, but we’re not reviewing this show based on how “fun” it is to “exercise” too, is the show worth watching? I don’t like those inverted commas around the word “exercise” it was innocent I swear!

Sure sure… The show is—minimalistic, that’s a polite way to put it. There’s the pretence of a story, the girls are training to become idols—that’s it, that’s the story. Like a lot of these shows (and I’m not even sure what I mean by “these shows” this is the first show like this I’ve ever watched) the focus is on characters. And there are some really good characters here—honestly!

And by “good characters” I hope you don’t just mean superficially. Well yes they are ~aesthetically pleasing~ I really enjoyed the wannabe goth Shion Tachibana who fancies herself as a “fallen angel from a dark fantasy world”—the way her ‘dark speak’ kept slipping whenever she got too focused on exercising was absolutely adorable. Yu Hiraoka is a shy cutie-pie with glasses, total ‘childhood friend’ trope in all the best ways. But my best girl is Shizuno Saotome…

What’s she got going for her? Well, uh—nice oppai?

Man… sometimes I swear you’re a lost cause… She’s really nice and has a good personality too! I swear I’m not that shallow…

So… this show (and I use the term lightly) would you recommend watching it. No not really… I mean I personally don’t regret the decision but there’s nothing to be gained from watching this show, nothing to be learned, nothing to ~feel~, it’s light junk food… no that’s not right, it’s like a glass of sparkling mineral water, it’s bubbly but insubstantial… Oh except… 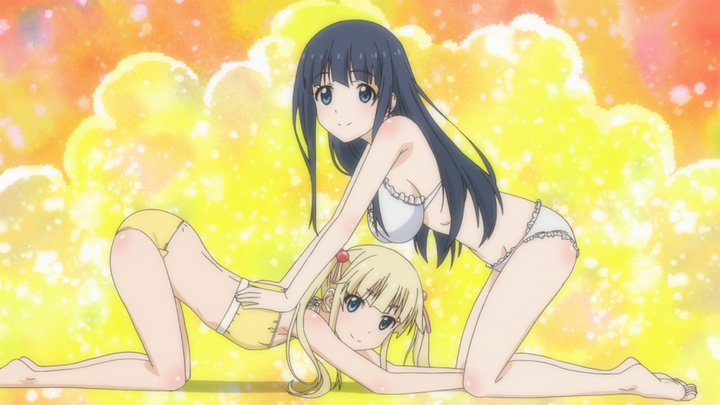 Except for what? The last episode is so damn fun and silly it makes the whole thing worth watching, it’s kind of hard to explain but it definitely gave off a distinctive Tim and Eric vibe—if you’re familiar with that style of comedy. Definitely unexpected, but I’ve watched the last episode like 4 times it’s so good. I could even go as far as say just watch Episode 12 of Season 1 by itself and just enjoy 4 minutes of musical related nonsense, it’s very enjoyable!

Wait “season 1” as in there’s more of this nonsense?! Of course, it had a 2nd season a year later, I’ll probably watch it when I feel like exercising again…

Uh-huh… So final score and recommendation for Anime de Training! EX? Taken as something to motivate you while exercising it’s a great tool as it’s got both slow moments and high energy moments too, plus if you’re like me, being spurned on by moaning and sweating cute girls is great encouragement (did I just say that out loud?!) But, taken on its own merits, there’s not much to recommend, some of the characters are well-written and voice acted, the creepiness of the fan-service—while rationalised in-universe and ~technically~ consented to, could still be considered creepy to some. Ultimately there’s just no real reason to bother to watch this show other than the thoroughly amusing and off-kilter 12th episode. This series needs a work-out, 55 out of 100.