Time For Change – An Anime QandA Review for ‘YU-NO: A Girl Who Chants Love At The Bound Of This World’ Episode 2 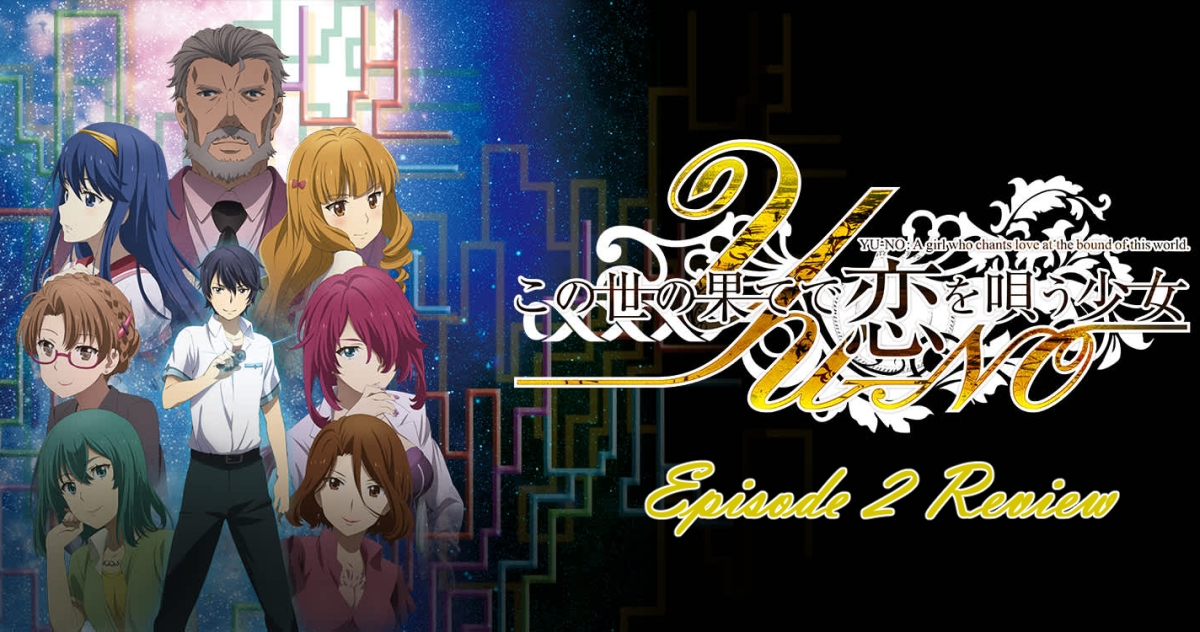 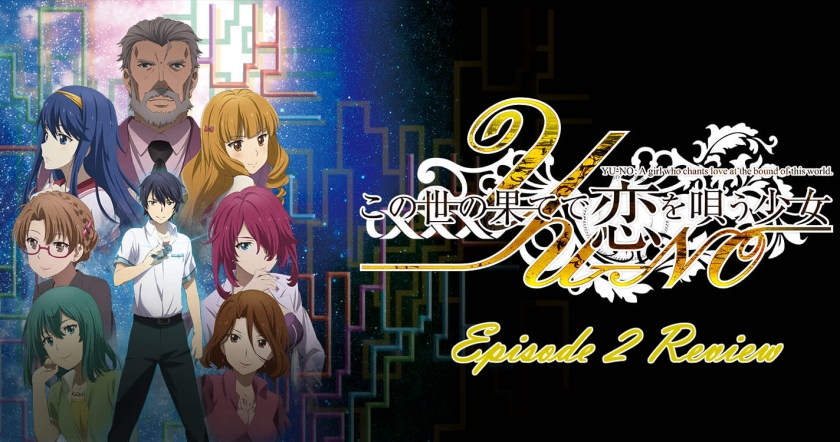 What’s the show? YU-NO: A Girl Who Chants Love At The Bound Of This World, Episode 2.

And how’s this episode? As you may recall from my last episode review I was intrigued by the premise and execution of the show. I was, however, less than impressed with the perverted antics of our protagonist who himself felt like a relic from an earlier age of anime where these kinds of antics were excused as “boys will be boys” rather than being called out in such behaviour as he would in a modern anime.

Uh-huh, I recall… so what about it? Well the opening minutes of this episode has our protagonist discovering the function of the device his father left for him. It can manipulate timelines, allowing him to make an action then go back and make a different action resulting in a divergent timeline. And immediately I was worried about what kind of shenanigans he would get involved in considering he had a blank check for (further) sexually related consequence free mischief.

Oh no. Indeed, but turns out those fears were (for now) unjustified as he only uses it to attempt the rescue of his step-mother from the hands of thugs who are trying to get their hands on her father’s research papers. He first tries a diplomatic approach–fails. Changes timelines and tries a violent approach–fails. Changes timelines again with a borderline suicidal approach–and fails at which point one of his step mother’s colleagues shows up to “save the day” and the episode kind of ends on a weird tonally ambiguous cliffhanger.

Right. And is that all that happens in the episode? No, there’s some stuff early on that’s ~probably~ important but is more just half filler/half laying groundwork for future stuff. Compared to the first episode this one was kind of dull but likewise a bit more subdued and less ‘throwing everything at the screen to try and grab people’s attention’ which helps establish a more consistent tone and narrative pace–though at the pace we’re currently going I’m glad this is a 26 episode series as it’s going to need the time to get to what it wants to do (whatever that may be).

I see. Anything else you want to add? A lot of time in science-fiction, especially when discussing things as complicated as alternate universes’ and branching actions causing new realities–things can get bogged down in a lot of techno-babble. That’s why I appreciated this show’s straightforward visual approach to explaining and then demonstrating the specifics of this show’s alternate reality theories. It’s nothing particularly unique but it was easy to grasp the basics of after a single viewing.

And how’s your recommendation stand from last week? If you were put off by how ‘ecchi-adjacent’ some of the scenes were and the actions of the protagonist this episode tones things down considerably–that’s not to say it won’t return to last week’s ~shenanigans~ but for the time being the focus seems to be on the story and the characters.

Previous ‘YU-NO: A Girl Who Chants Love At The Bound Of This World’ Reviews:

Blast From The Past – Episode 1 Review

Blast From The Past – An Anime QandA Review for ‘YU-NO: A Girl Who Chants Love At The Bound Of This World’ Episode 1 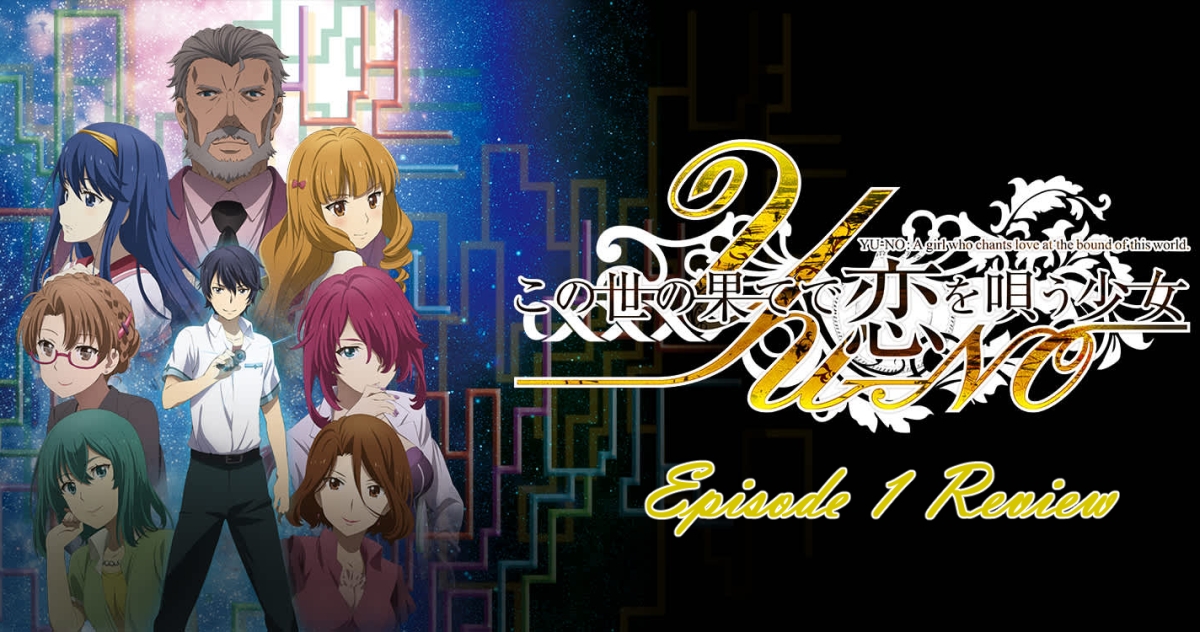 What’s the show? YU-NO: A Girl Who Chants Love At The Bound Of This World, Episode 1.

Ah, first new show of the Spring 2019 anime season, huh? How was the first episode? It was good.

…Oh…kay then? Going to elaborate a little more on that 3-word review are we? I don’t know, I’m usually pretty sure about whether I’ll like something or not from the get-go but this is an odd one… I’m going to definitely need more episodes to even get an idea what kind of show it is.

Well what can you tell me about the series? It’s a bit ‘Steins;Gate’-ish, only with a more adolescent edge to it–our protagonist Takuya shares more than a few similarities with a ‘typical harem lead’ but I don’t think this show is trying to be that. It will be about relationships at some point but I hasten a guess that they’ll be peripheral fodder for light-hearted shenanigans where the focus will be on the mystery surrounding the disappearance of his father as well as the time travel and alternate universe gubbins that serves as this shows ‘hook’.

So it’s science fiction, mystery, comedy and romance? More or less, and in that order so far.

And what’s your biggest concern about the series? So a little background information, this series is based on a visual novel from 1996–that’s probably from before most of my readers were even born! And while I won’t say this anime in anyway feels dated, it does feel ~different~ to some modern anime in a way I can only attribute to the age of the source material. It’s not even something tangible or expressible just a feeling I had while watching this first episode. So it makes me wonder whether certain mid 90’s sensibilities are going to find their way into the script or whether it’s been ‘updated’ for modern audiences.

I’m not sure what you mean by “mid 90’s sensibilities”? I’m worried the show is going to have outdated gender stereotypes–you know the kind of casual sexism that you used to see all the time in 90’s media. And I’m mostly worried about that coming from our protagonist because as he is at the moment is walking a fine-line for me.

Oh? What’s he done wrong already in the space of a single episode? He makes sexual advances towards his teacher, he asks whether a grumpy classmate is experiencing “that time of the month” to explain her attitude, he’s implied to have had some sort of “relationship” with an ex-tutor and as a ‘joke’ he jumps out in his underwear at the new female transfer student. Not exactly a compelling case for a character I want to support for a longer running series.

But what’s so different about him compared to other harem or harem-adjacent anime? Compared to modern anime? Quite a bit, the ‘pervert’ archetype isn’t as common as it once was and is usually relegated to side characters. But even in the rare cases where a pervert character is the main protagonist (like in Maken-Ki) they are almost immediately verbally or physically rebuked for the conduct. Whereas here it’s shrugged off as ‘adolescent folly’ and ‘boys will be boys’–a mentality that may have been easy to get away with in 1996 but not in 2019!

Sounds like you’ve worked yourself up quite a bit from where we started with the “it was good” remark? This is what happens when you write off the top of your head right after finishing the episode (and don’t bother to edit because that would negate the conversational style of my reviews). But I still stand by the “it was good” remark because it was, all the characters are interesting if a little blandly designed, the soundtrack suited the action and the intrigue was thick throughout.

So who would you recommend ‘YU-NO: A Girl Who Chants Love At The Bound Of This World’ for? Fans of time-travel and parallel world anime like ‘Steins;Gate’ or even things like last year’s ‘ISLAND’ seem like logical comparisons. It is more immediately sexual that either of those two but likewise I don’t think this is going into ecchi territory if that’s what you’re worried about. There’s enough interesting going-ons and unanswered questions (like what’s going on with the cute, naked blonde girl!) to keep me watching even despite my reservations about the protagonist. If any of this has sounded interesting then I’d recommend giving it a watch!