For those unfamiliar with ‘Mandarake’ care to explain? They are reseller of second-hand anime/otaku goods in Japan, they have several brick and mortar stores in Japan but I find the range and prices of goods is arguably better online (it’s also easier to find stuff as they have an “English” version of their site which is pretty good all things considered).

Probably worth pointing out that this is not a sponsored post, right? I wish! Yup, no sponsorship here, paid for all of this with my own money and just talking about them because I love what they do. But if they’re reading, I am open to sponsorship!

Also worth mentioning that “second-hand” is kinda different in Japan–at least for Mandarake it is? Second-hand in Japan is not any slight against the quality of the merchandise, most of the stuff they have for sale has never been opened and they even reduce things in price if the box is even slightly damaged–which is great for me as I just throw the boxes out anyway–I like my merch for its aesthetics on the shelf not for collectibility things in mint condition! Anyway let’s get on with it!

Uh-huh, so hurry up and let’s see what’s in the box? So, first I’m going to post a picture of everything that was in the box collected in one picture for those of you who don’t want to see every individual item. But likewise if you don’t want to have the 1 by 1 approach to going through what I bought spoiled skip the next picture! 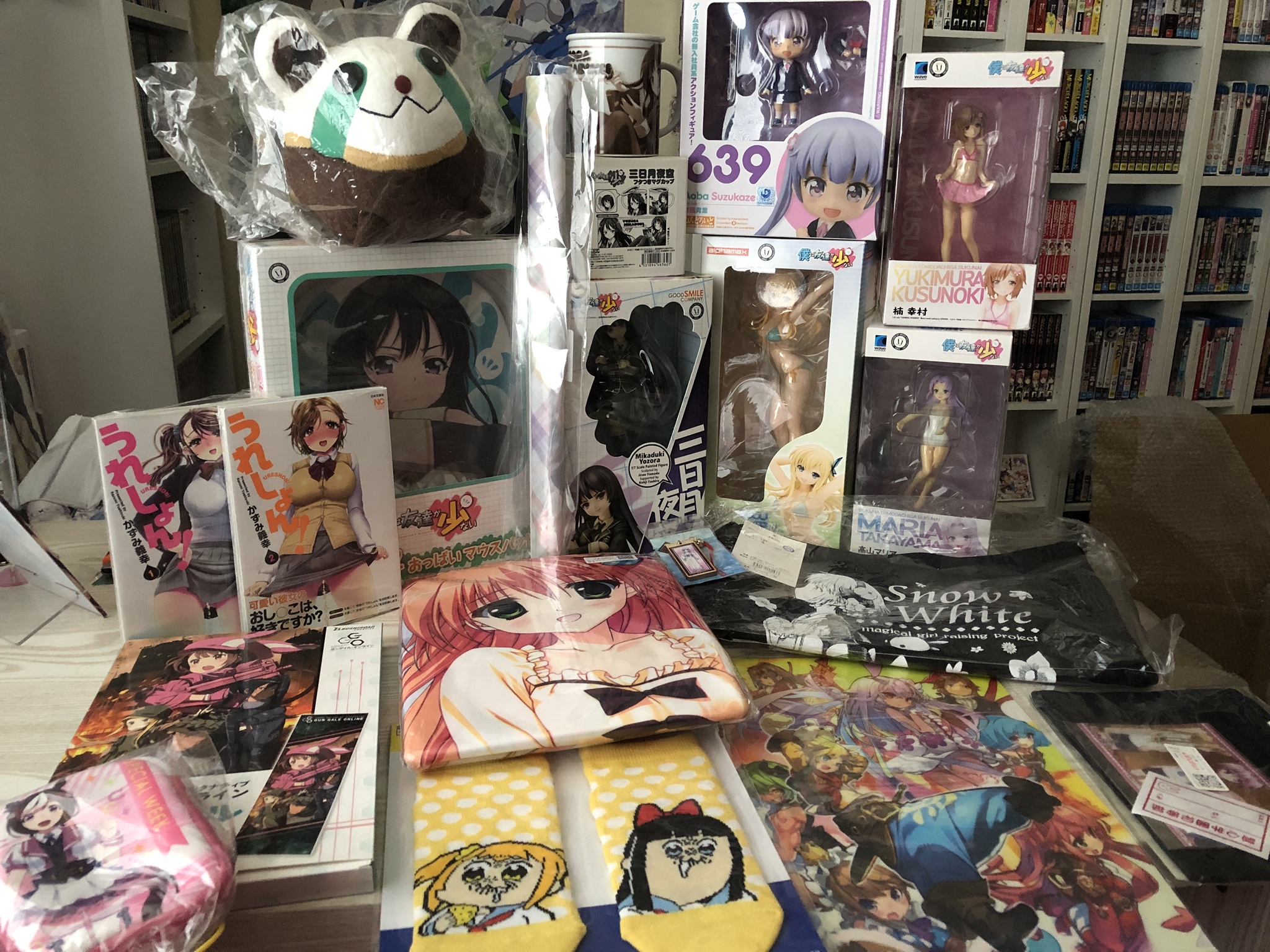 That’s a lot of stuff! Let’s break it down! ‘Kay, so I had just finished watching ‘Haganai’ and I loved it to bits so obviously I had to buy a bunch of merch from the show (and because it was so popular in Japan there was so much merch and a lot of it surprisingly cheap too! 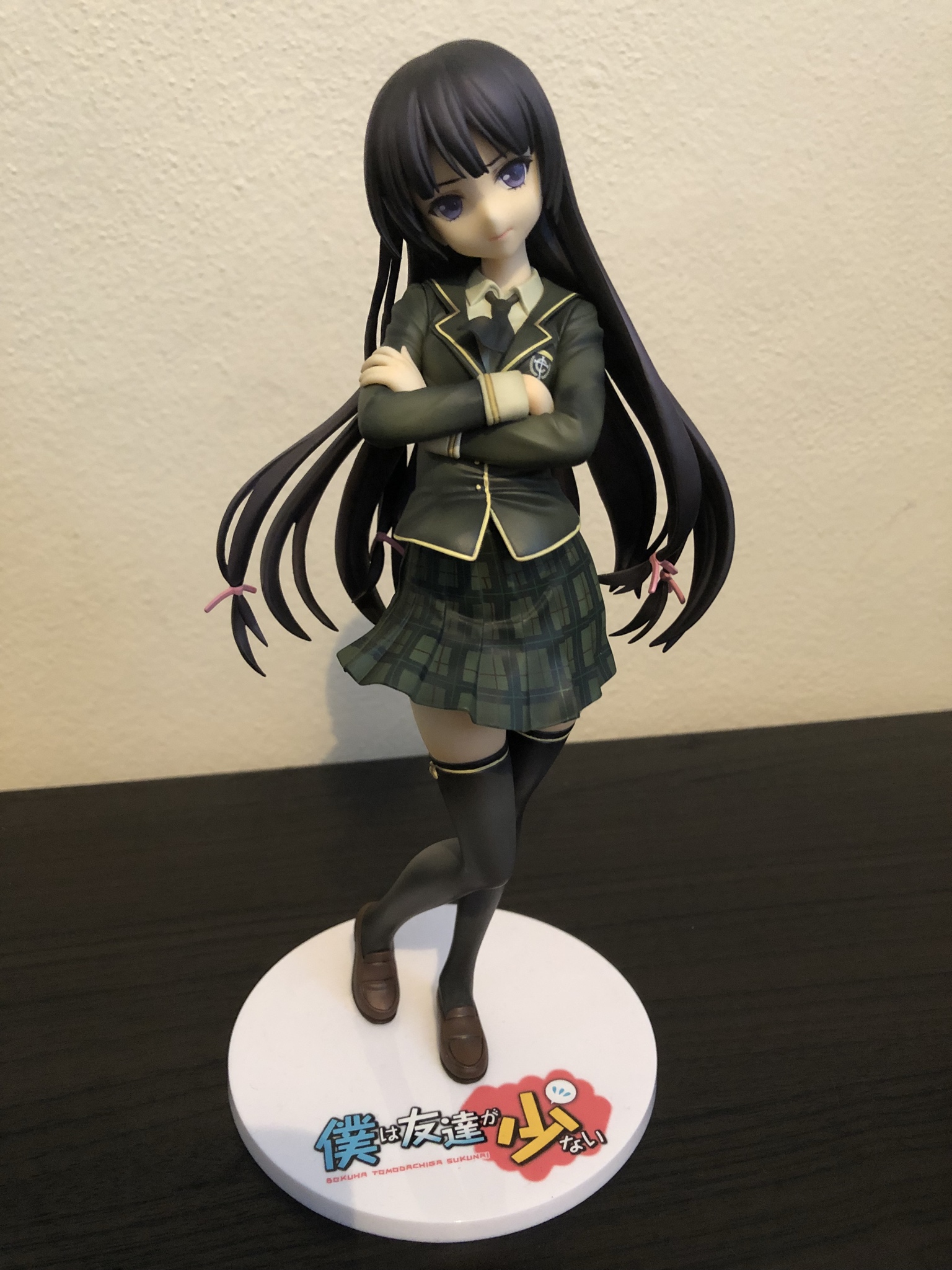 Who’s that? That’s one of the main female protagonists from ‘Haganai’, Yozora. This is a Good Smile Figurine and pretty nicely detailed–though the face is maybe a bit off but considering the price I’m not going to complain. 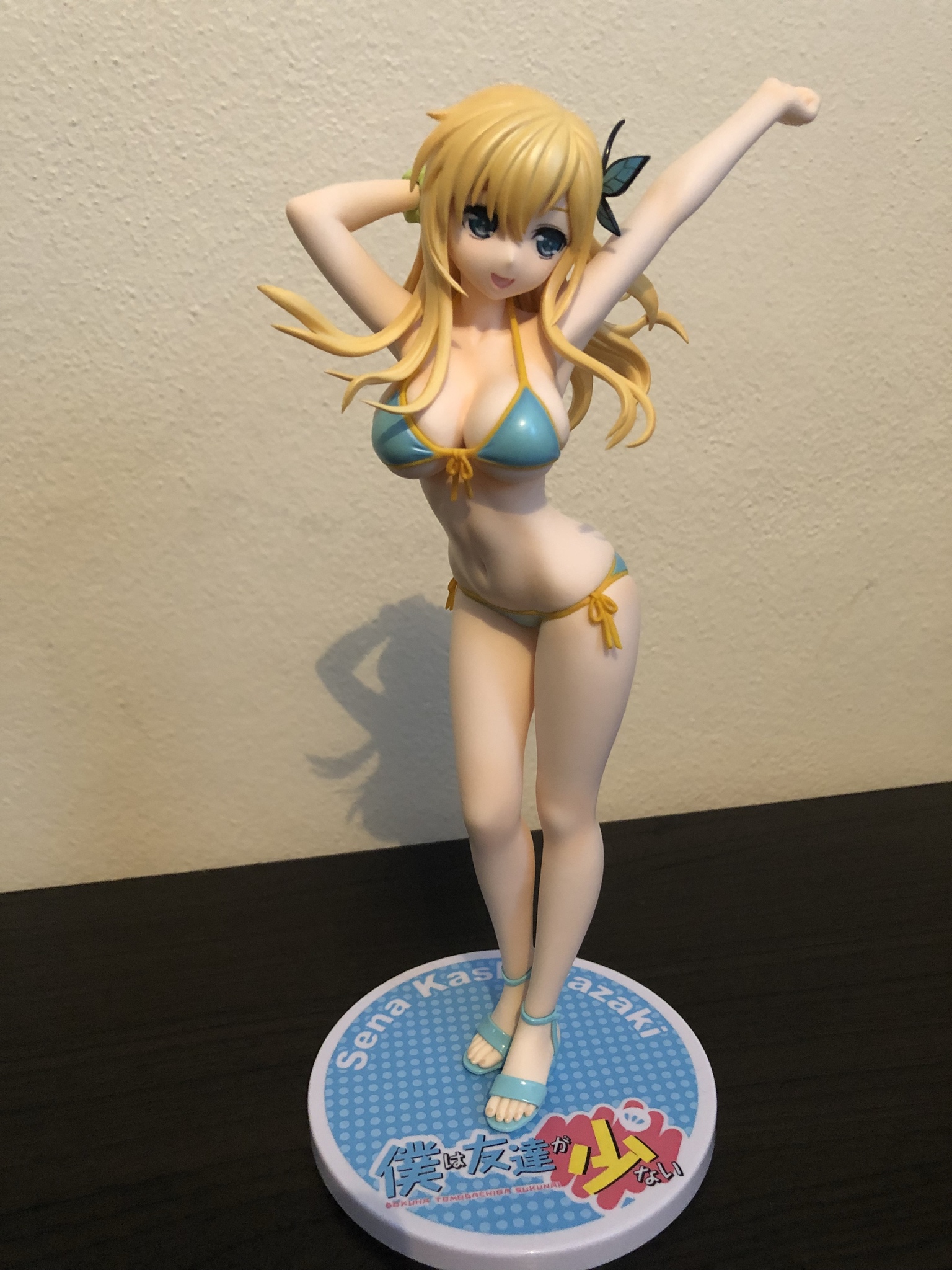 Well that didn’t take too long to get lewd. You’re so innocent, this is the other main female protagonist from ‘Haganai’, Sena. And this figurine is just gorgeous, it’s an Alphamax branded one and I’ll definetly be looking for more figurines from Alphamax in the future! 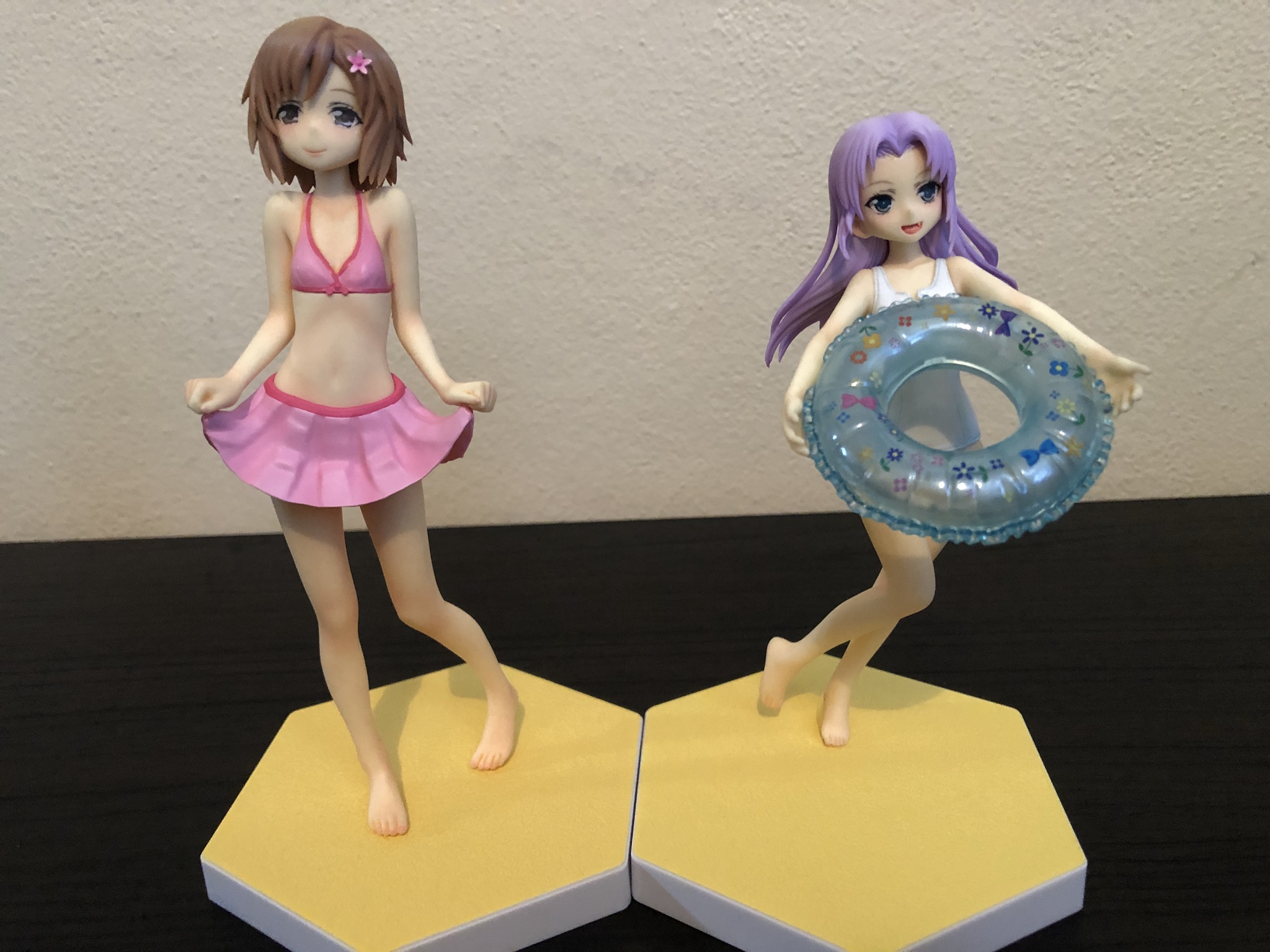 Oh good, loli’s in bikinis… Quiet you. These are two other characters from ‘Haganai’, Yukimura and Maria from the Beach Queens range of figures. Very cute!

So is that it for the Haganai merch? Nope! I did say I loved the show, didn’t I? 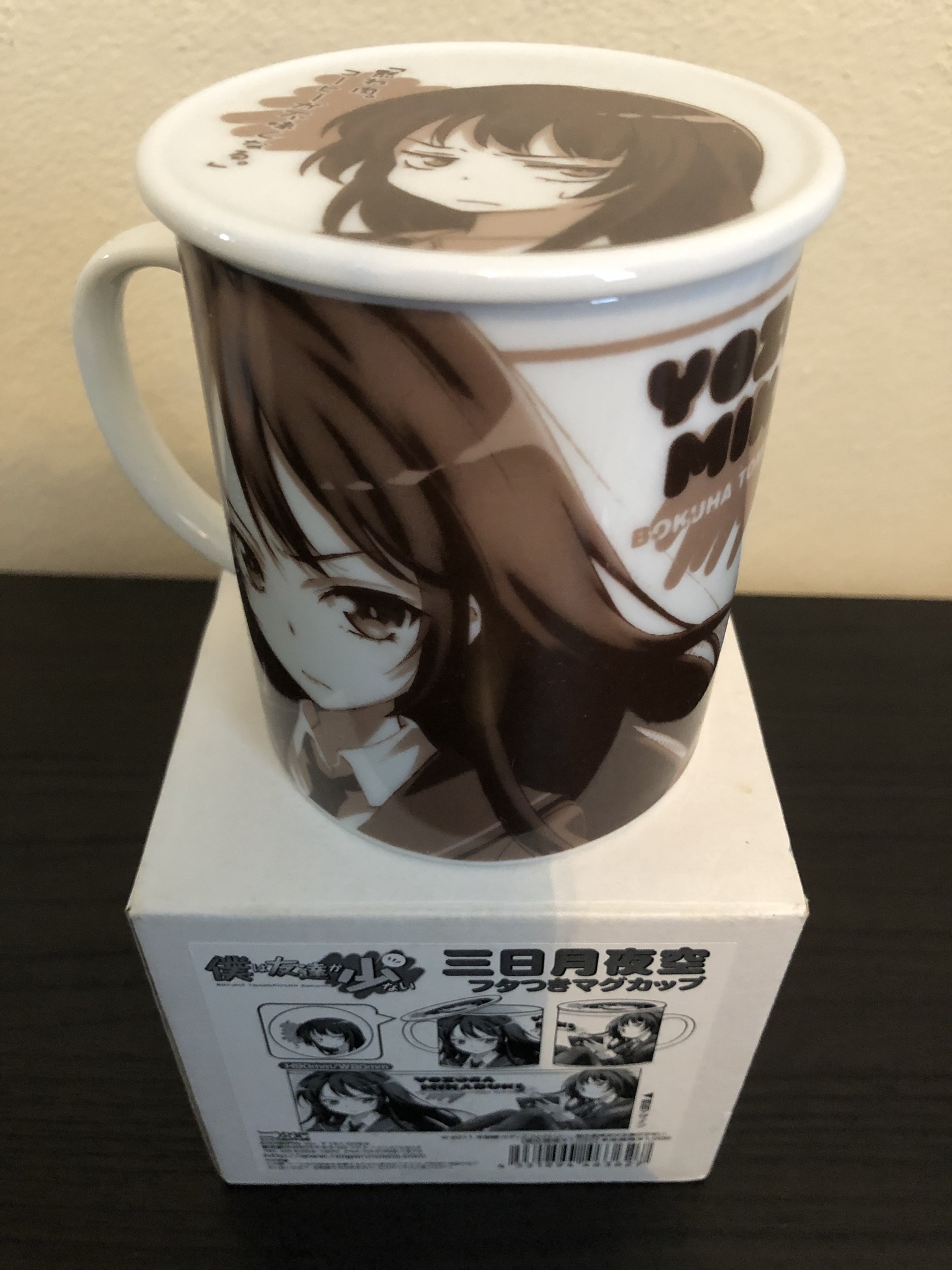 A mug with a lid? Yep, Yozora mug, as the only picture online was of the outside of the box I was hoping it’d be a full colour mug but alas it’s a rather ugly brown. Oh well.

Anything else from Haganai? Yes… but you’re going to make fun of me… 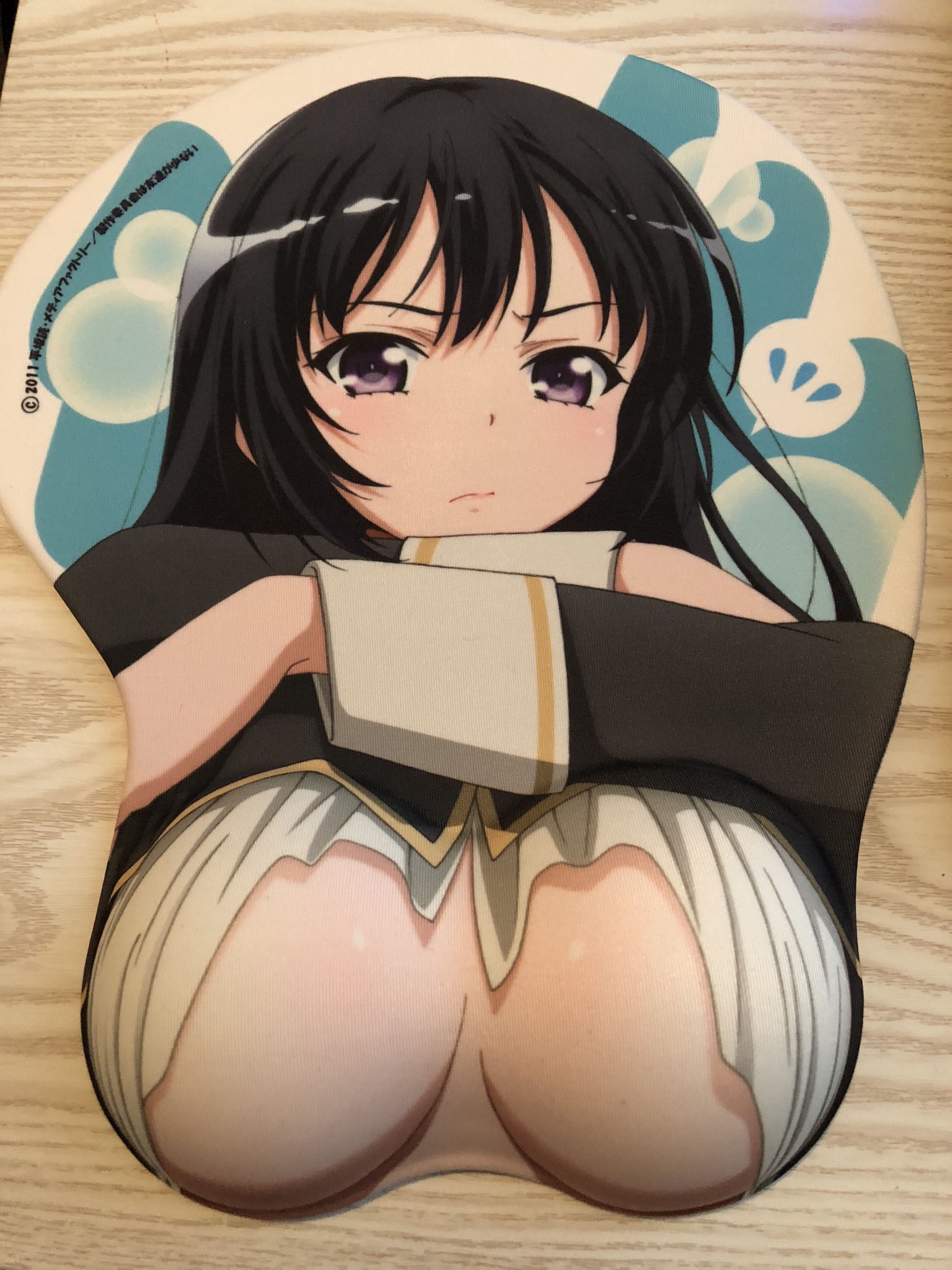 What is that? You don’t know?! Well this is awkward it’s an ‘Oppai Mouse Pad’, it might be hard to tell from the pictures but the breast part is raised and padded, to rest your wrist on. Believe it or not this is my first ‘Oppai Mouse Pad’ its very comfortable!

No comment. And that’s it for the ‘Haganai’ portion of the merch. The next few pieces are what I like to call, “eh it’s cheap so I’ll buy it” (all these items were purchased for under 300 yen which is roughly $3USD). 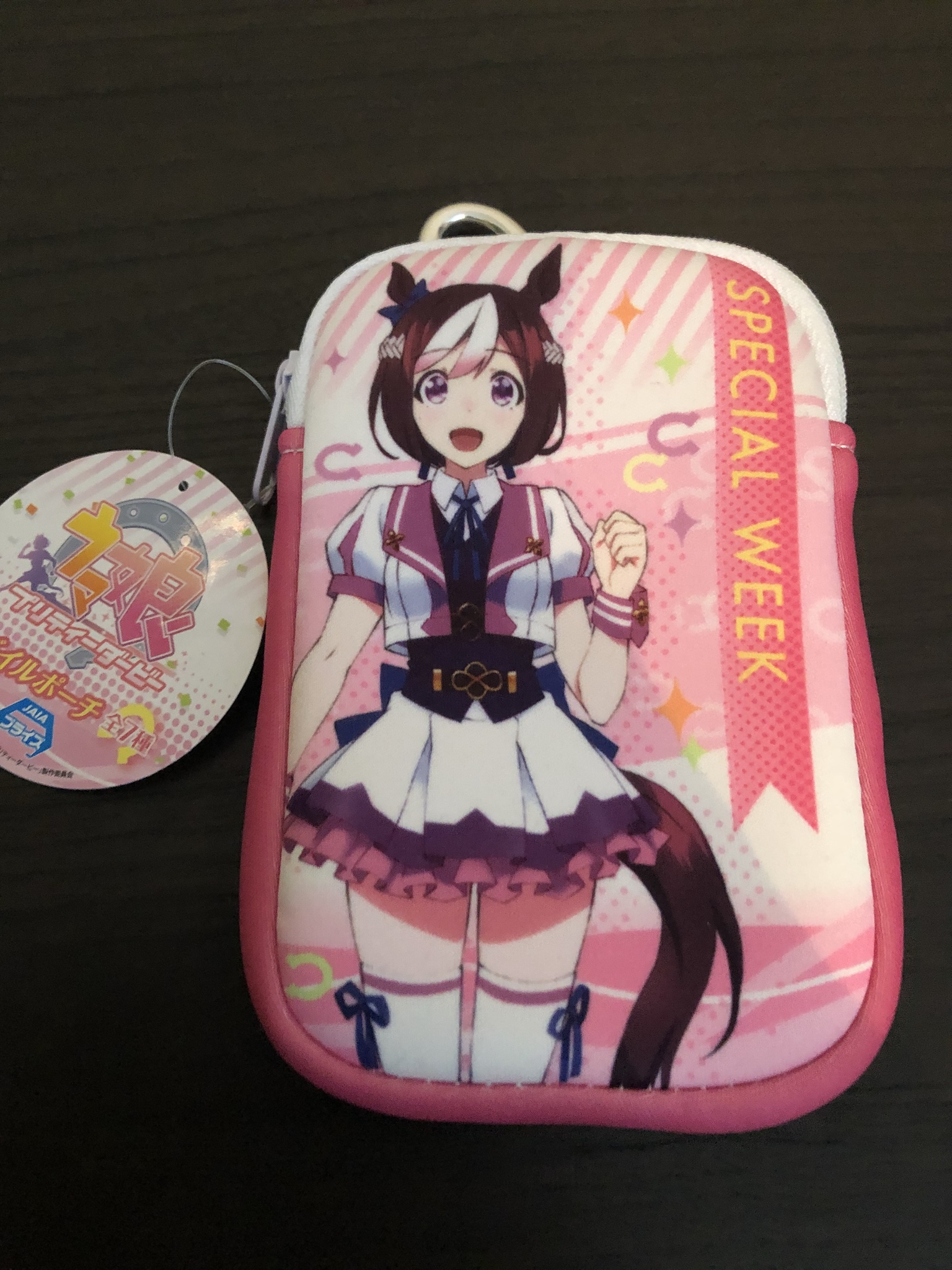 This is supposed to be an Uma Musume: Pretty Derby phone pouch but the only kind of phones that’d fit in something this small would be mid 2000’s flip phones. It’s got a karabiner on the back so that increases its value as an item for carrying, something, maybe I’ll put my digital camera in it when we go back to Japan! Also it’s not my photography skills the print of Special Week on the front was disappointingly low-res. Still cute though! 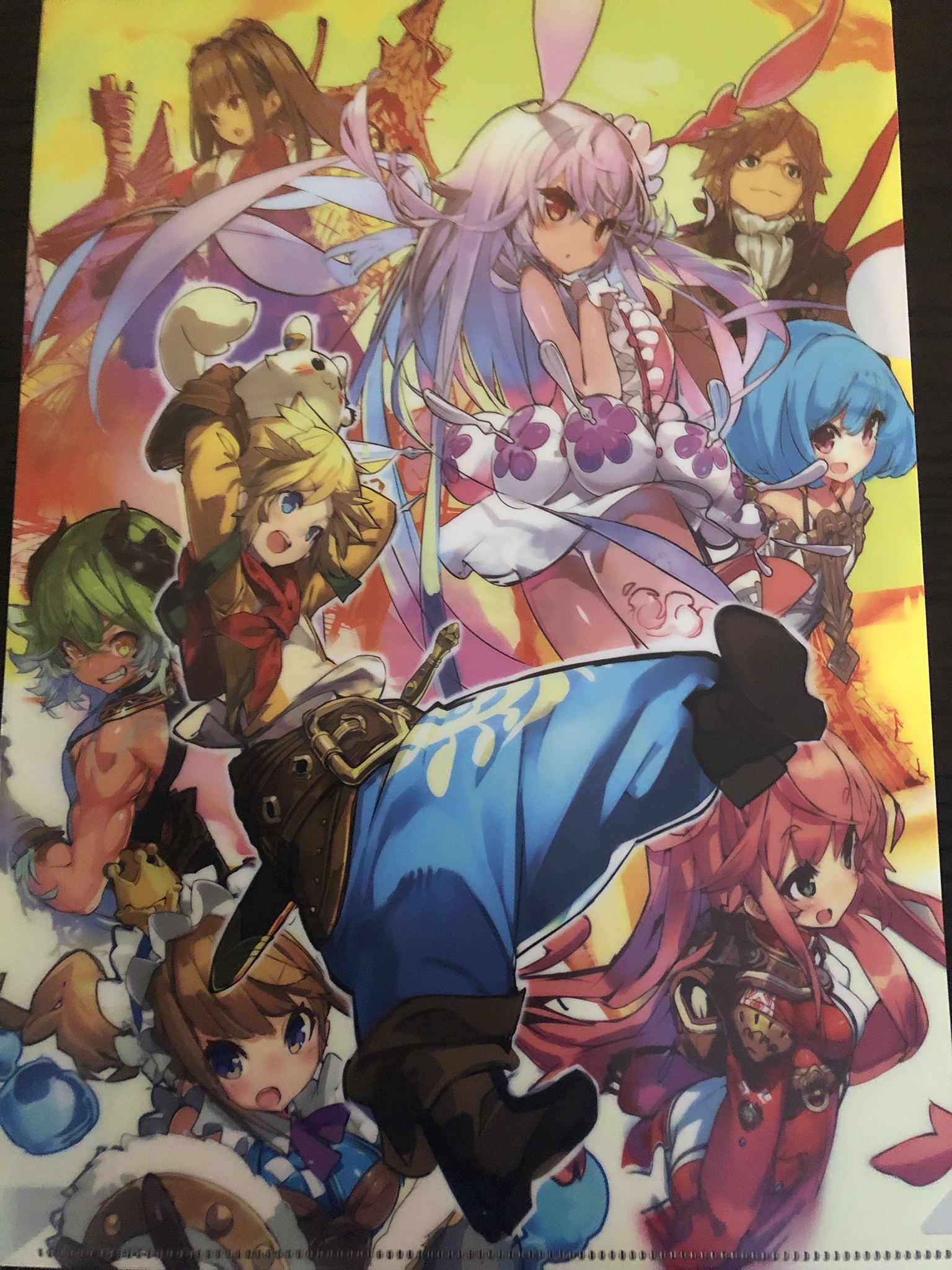 Wouldn’t be a Mandarake shop without a clear-file! I bought this because I wanted at least something from Winter 2018’s most under-appreciated anime ‘Last Period’ though this is actually from the mobile game but the characters are all the same so hard to complain! Bright and colourful! 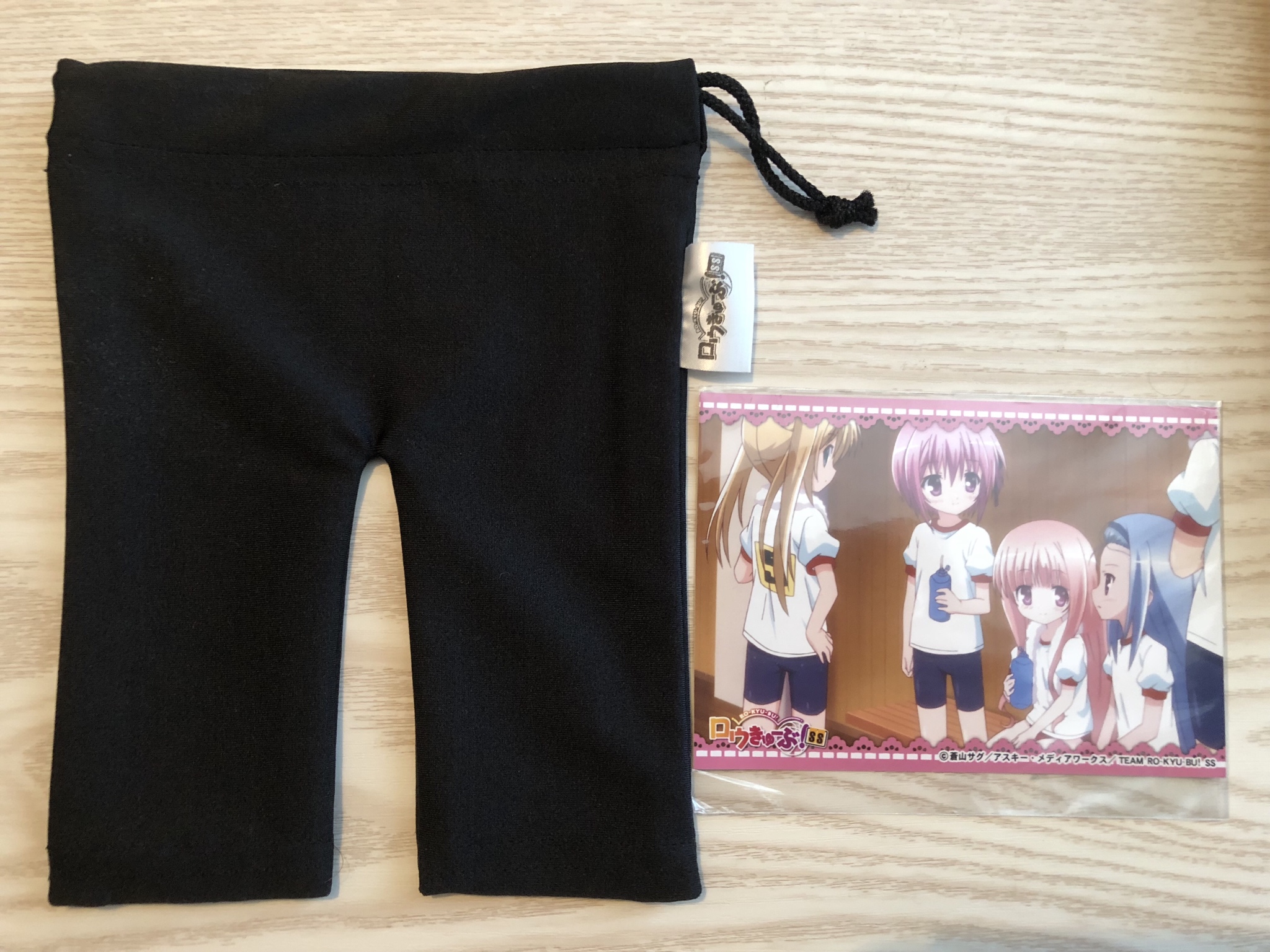 I always like to get one distinctly ~weird~ item and this absolutely fit the bill! It’s a drawstring pouch designed to look like the basketball tights the girls from ‘Ro-Kyu-Bu’ wear, it’s also smaller than I thought it’d be from the pictures (it’s length is just a bit shorter than a DVD case for reference sake). It also came with the glossy print which serves as a good illustration of what I’m actually talking about. Super weird but why the heck not! 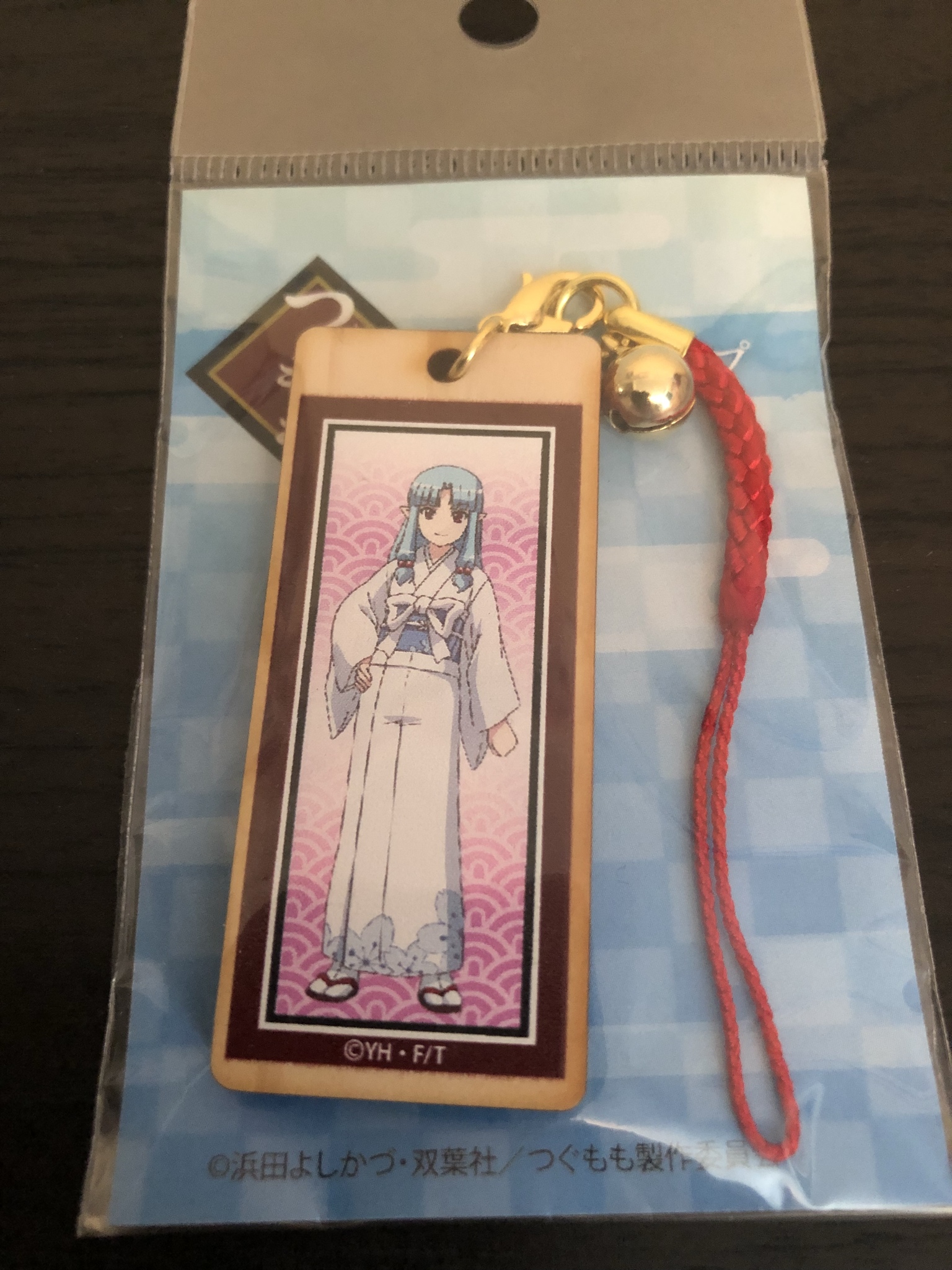 Last of the cheap items was the one I was most worried about possibly getting picked up by customs (luckily it seems they didn’t inspect the contents of the box). It’s a charm from the anime ‘Tsugumomo’ featuring main girl Kiriha. Why was I worried about this getting through customs? Well because it’s made of wood and there seem to be some sort of ~iffy~ import restrictions around wood coming in from certain countries into Australia. I didn’t even think about it until after I placed the order! All good though!

Okay, so that’s all the cheap items? What’s left? Well I got four items for the irlwaifu (though I only have two pictures of them because the other two items were in-use at the time of taking these photos), so let’s look at those! 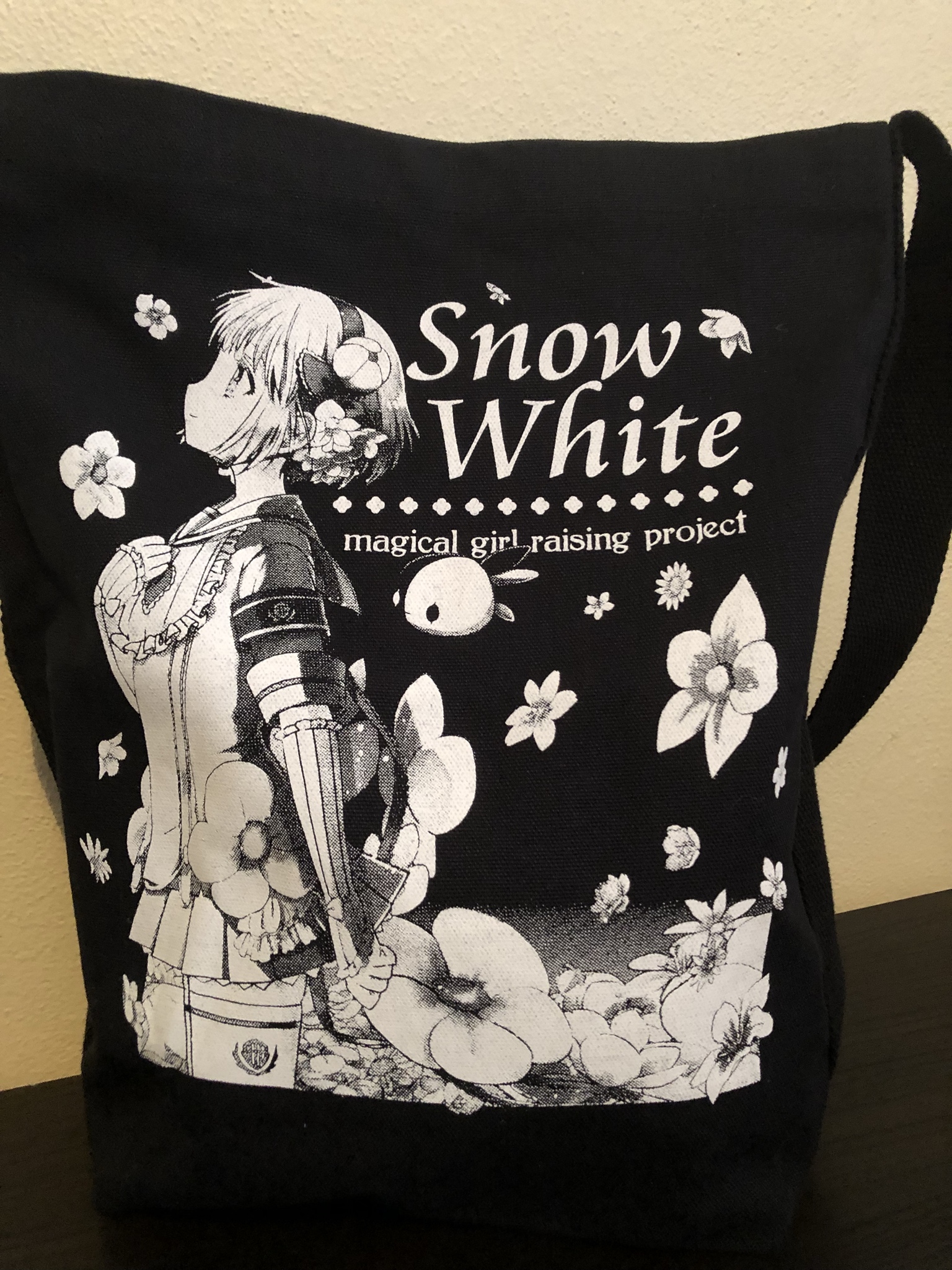 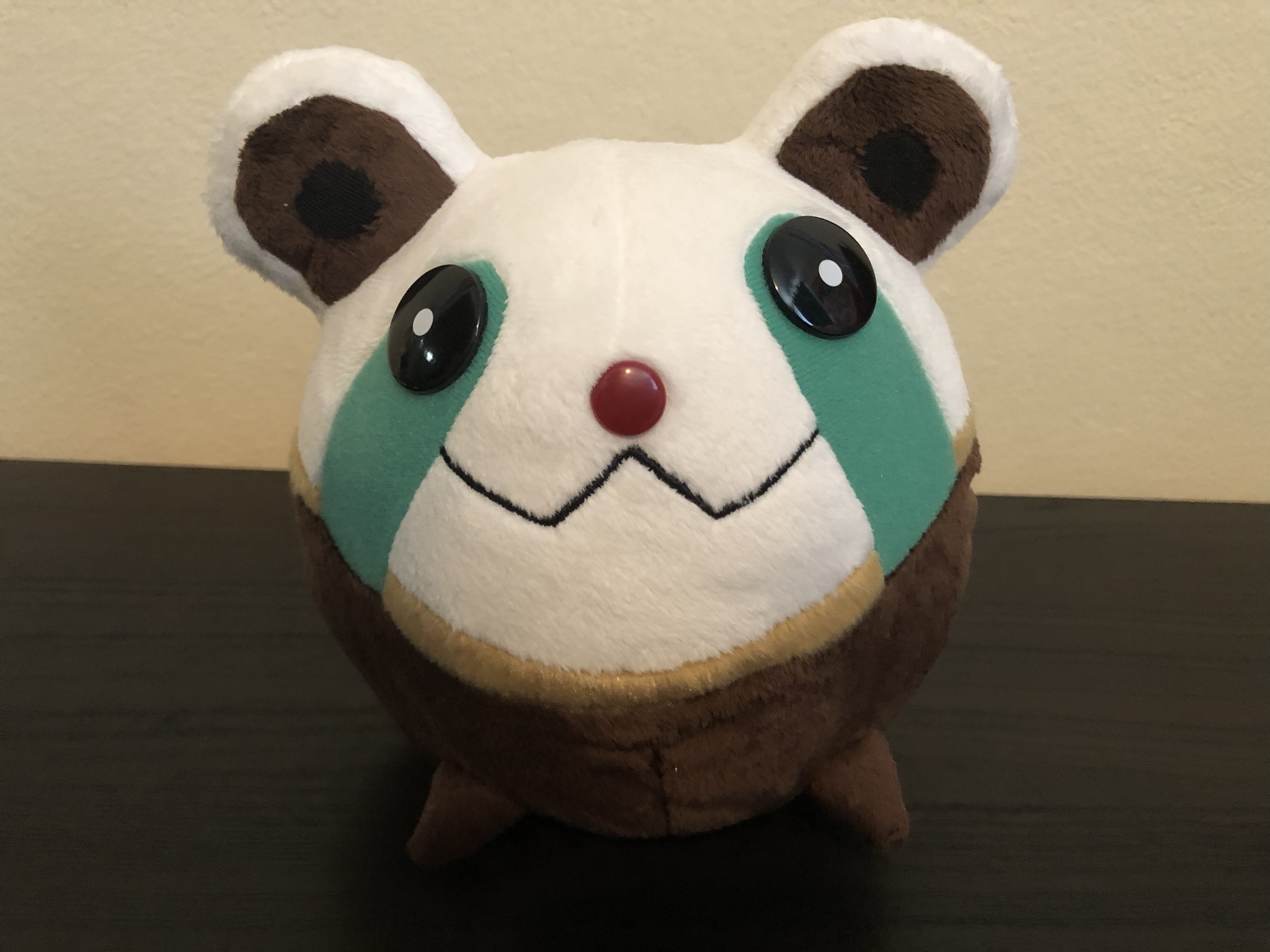 Next is a plush Oopa from ‘Steins;Gate’. The other two items that I didn’t get individual pictures of (but that you can see in the larger photo with all the goods) were a pair of Pop Team Epic socks and a Gun Gale Online microfibre cloth which currently adorns the back-middle seat of the irlwaifu’s car.

Okay then, and now I’m guessing more stuff for you? More or less. The next two items are related so I’ll talk about them. 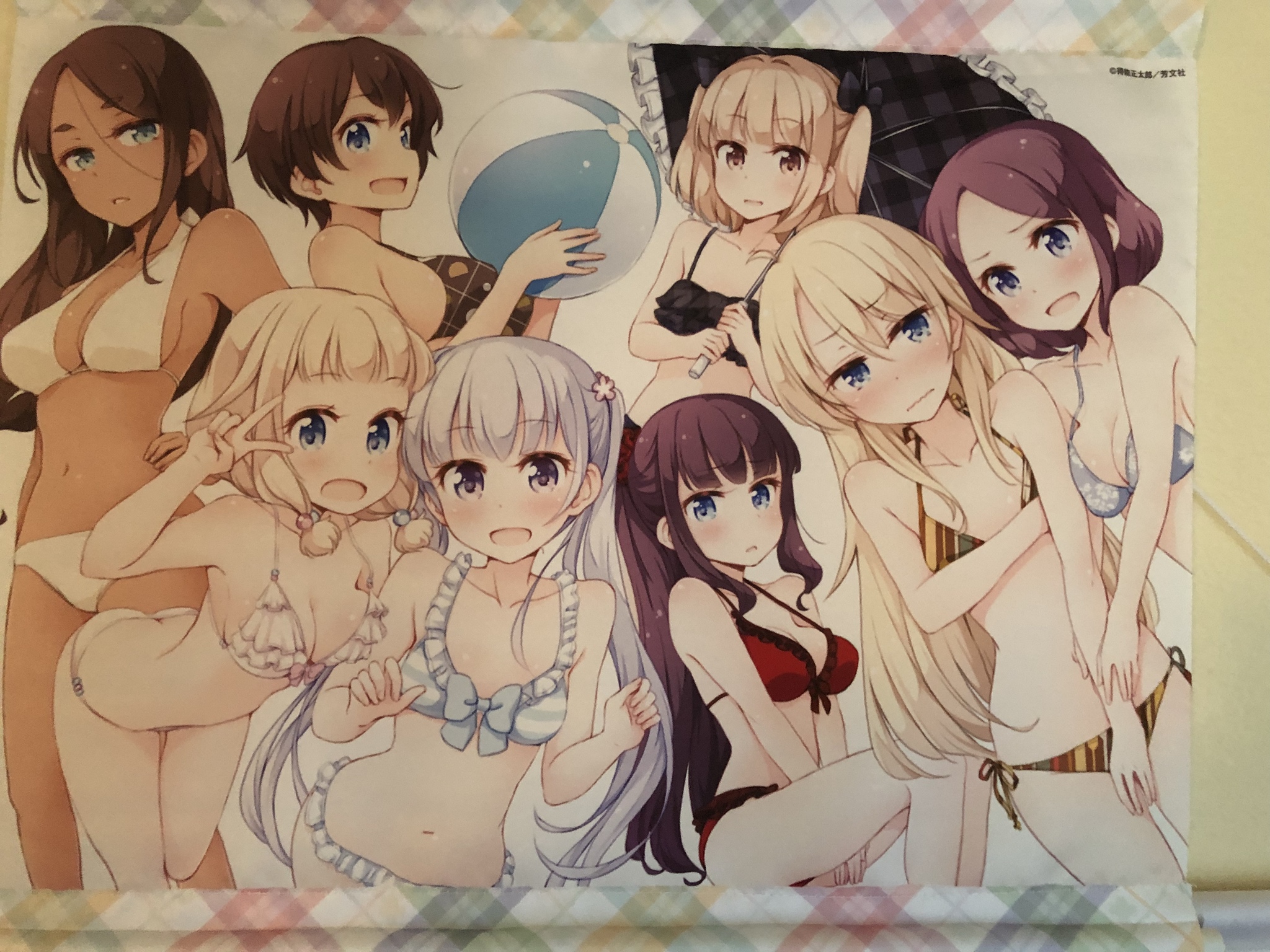 First is a ‘New Game!’ tapestry! I already have one, but it has the girls in yukata’s so I needed something that was, well the opposite of yukata’s! 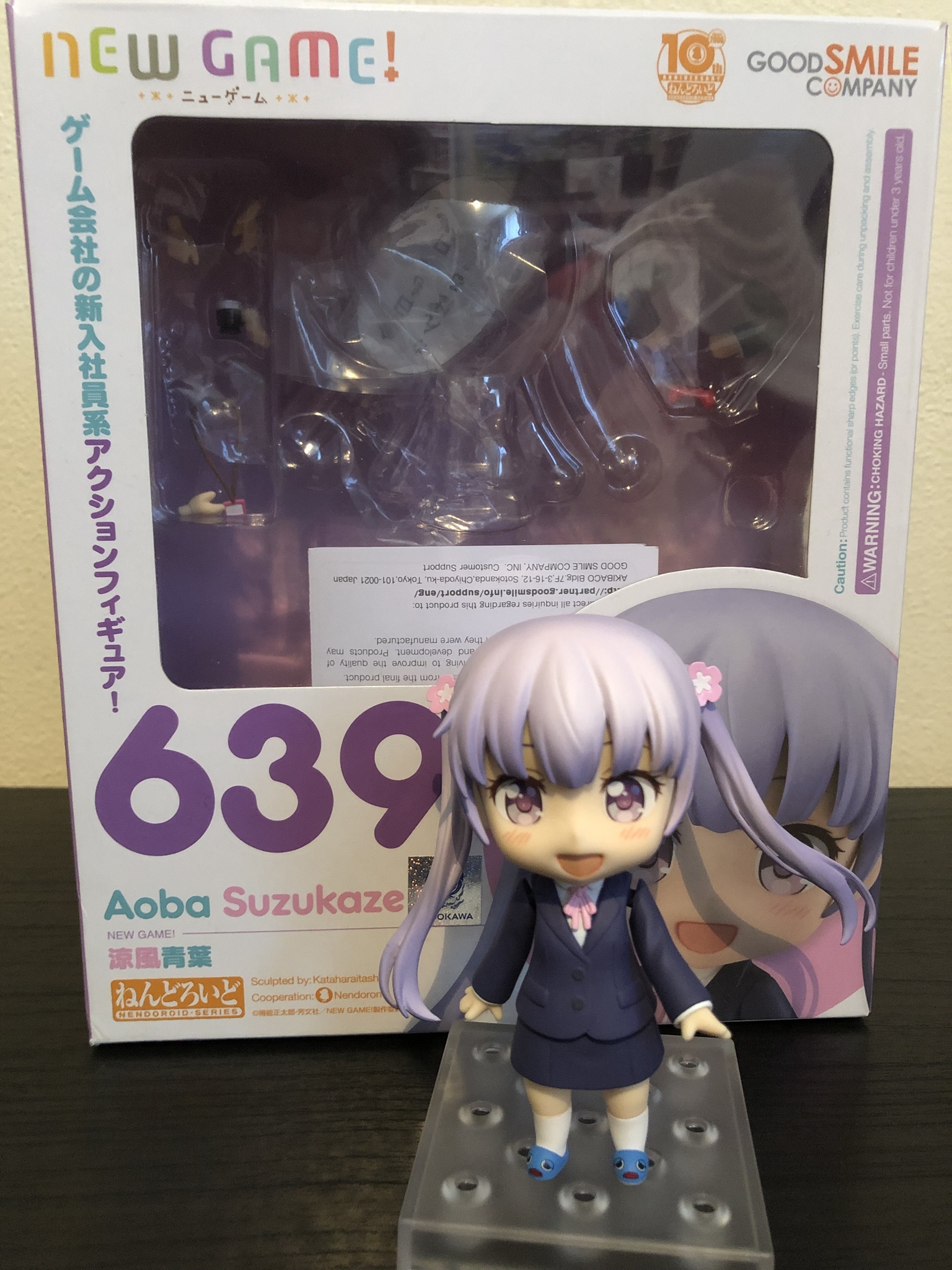 And a Nendoroid of Aoba from ‘New Game!’ so very cute!

Anything else you’ve missed? I think we’ll call this final part the NSFW section, it’s just two pictures and there’s no nudity on display but still consider yourself warned. 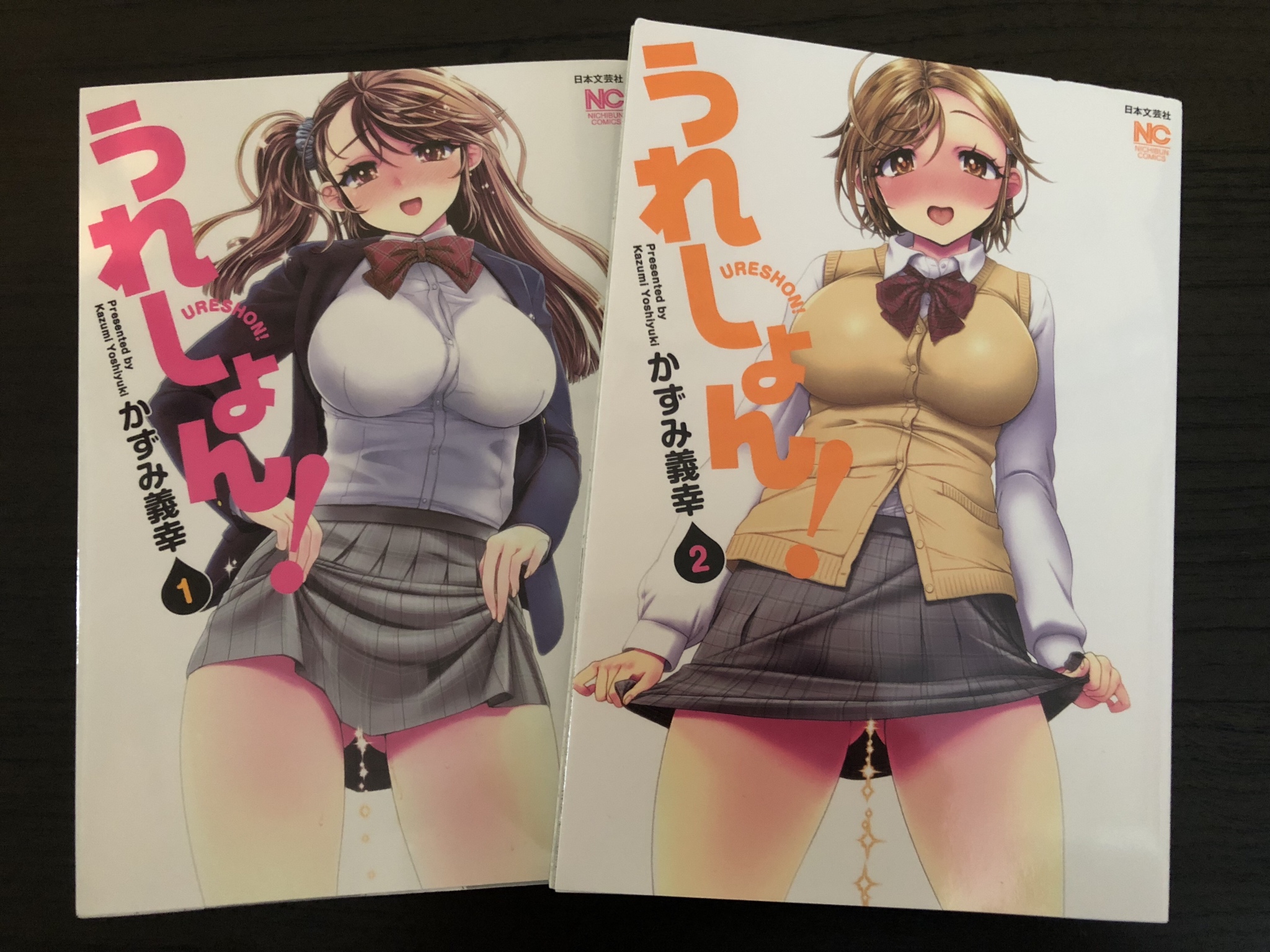 This is a manga series called ‘Ureshon!’ which will never be released by a Western publisher in English. It’s not porn, despite what you may think it’s just a heavily ecchi romantic comedy. I’m sure you can figure out what’s it about, and I’ll leave it at that. This was a difficult purchase not because I was embarrassed or anything (if I was I wouldn’t be posting about it here!) but because it sets a Japanese-language manga buying precedent. I have over 200 English-language manga titles but this is my first one wholly in Japanese, I was worried that if I started buying them in Japanese it would open the flood gates (for the lack of a better word) but thankfully for my wallet I’ve not bothered to look for any more… yet.

And last but not least another dakimakura (body pillow) to the collection! This makes three and this lovely lady is Ui from ‘A Bridge To The Starry Skies’, I’ve only seen the anime (not the eroge game it was based on) but I really thought the anime was beautiful and funny and touching.

Again, I think it’s best if I say “no comment” and let you wrap up this blog of yours. Thanks everyone for reading, if you have any questions about any of the items or just merch in general feel free to leave a comment below!