Irina and I review ‘To Love-Ru’ Episode 6 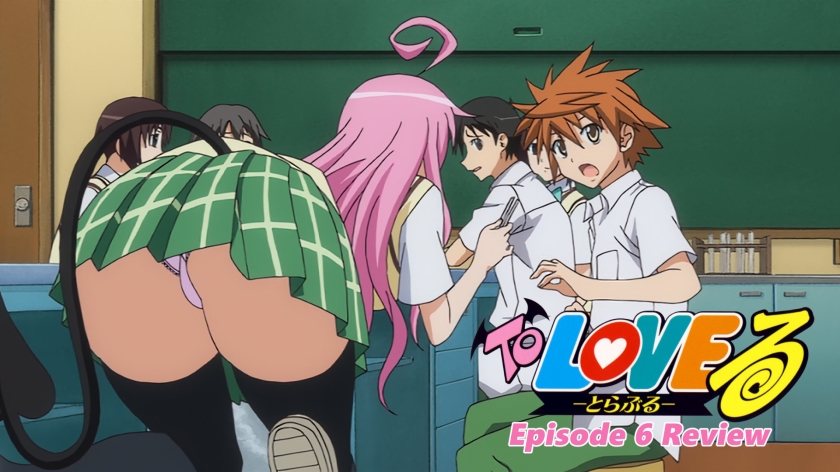 This is a part of an ongoing collaboration of ‘To Love-Ru’ reviews between myself and Irina from I Drink And Watch Anime, the links to the other reviews can be found at the bottom of this post.

Here we are with the episode 6 review and I was kinda dreading this one! I recall not being a fan of this episode on the first watch and well, my thoughts haven’t changed too much on that one… but we’ll get to that later. Well, now I’m curious!

So the episode opens with Zastin, in his patrol ship orbiting Earth as one of his officers notes an entity entering Earth’s atmosphere. They ask whether he wants to intercept it but he decides to let it pass saying it will be a good test for ‘groom-to-be’ Rito and its a strong opening. What did you think of it? I thought – how weird to see Zatsin so efficient! I liked it. Zatsin usually means some goofball antics are afoot and I think To Love Ru really handles that type of humour well. I was hoping for more GLORIOUS DEATH IN BATTLE wordplay with Rito. One of my favourite gags so far! 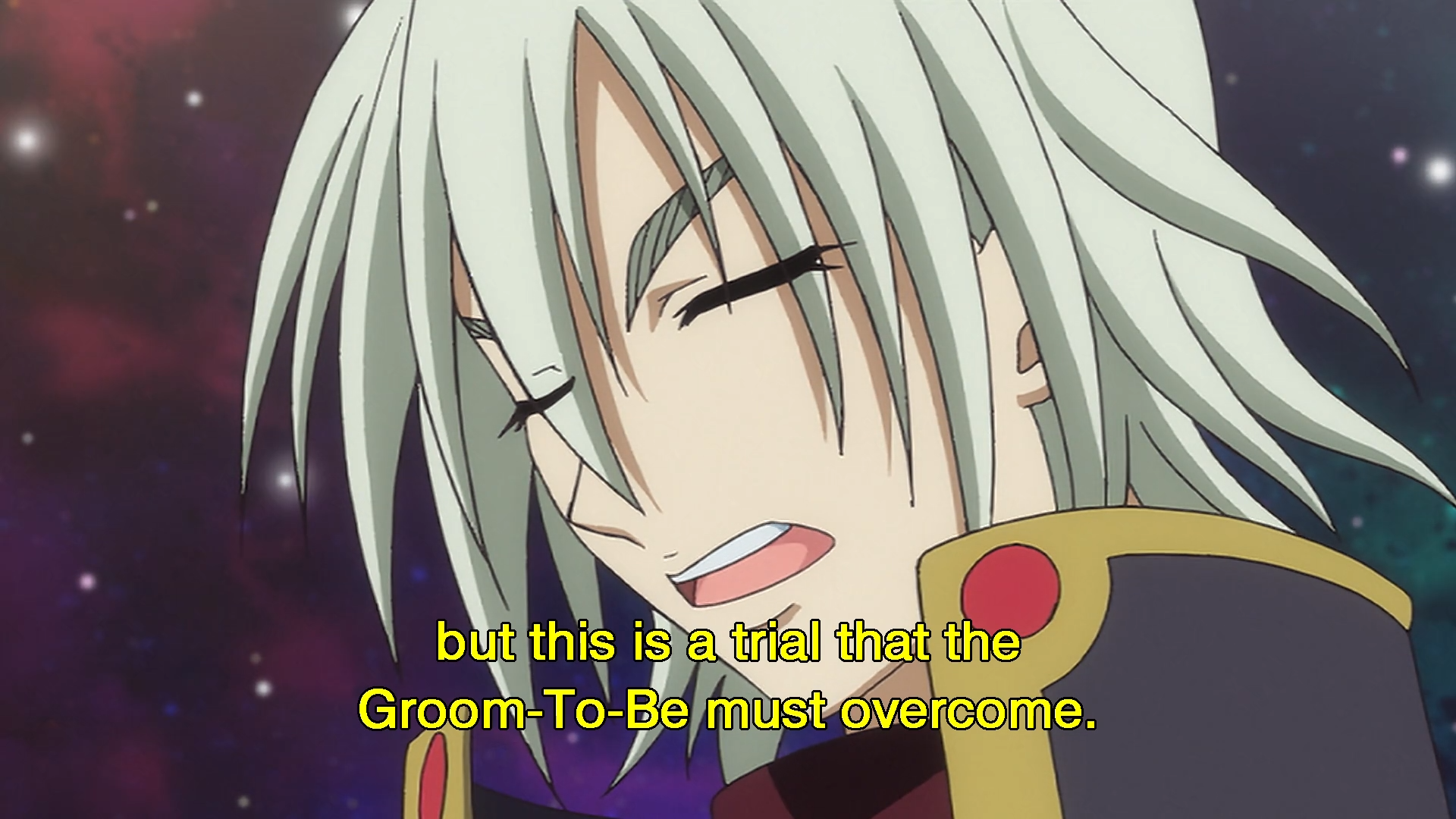 We’re introduced to the ‘entity’ in question, a grotesque shape-shifting alien assassin by the name of Ghi Blee, he’s there to take Lala’s hand in marriage–by any means necessary. The early scenes with him watching over the shenanigans in biology class were very sinister and set a good atmosphere of tension and mystery that contrasted with the silliness going on in the classroom. I actually didn’t hate the design of the alien. I found it interesting and the having to go to the bathroom joke was pretty good. The idea they forgot to put a toilet on the spaceship or it was clogged or defective like in a plane was a nice touch. I giggled, even if it was pretty juvenile. 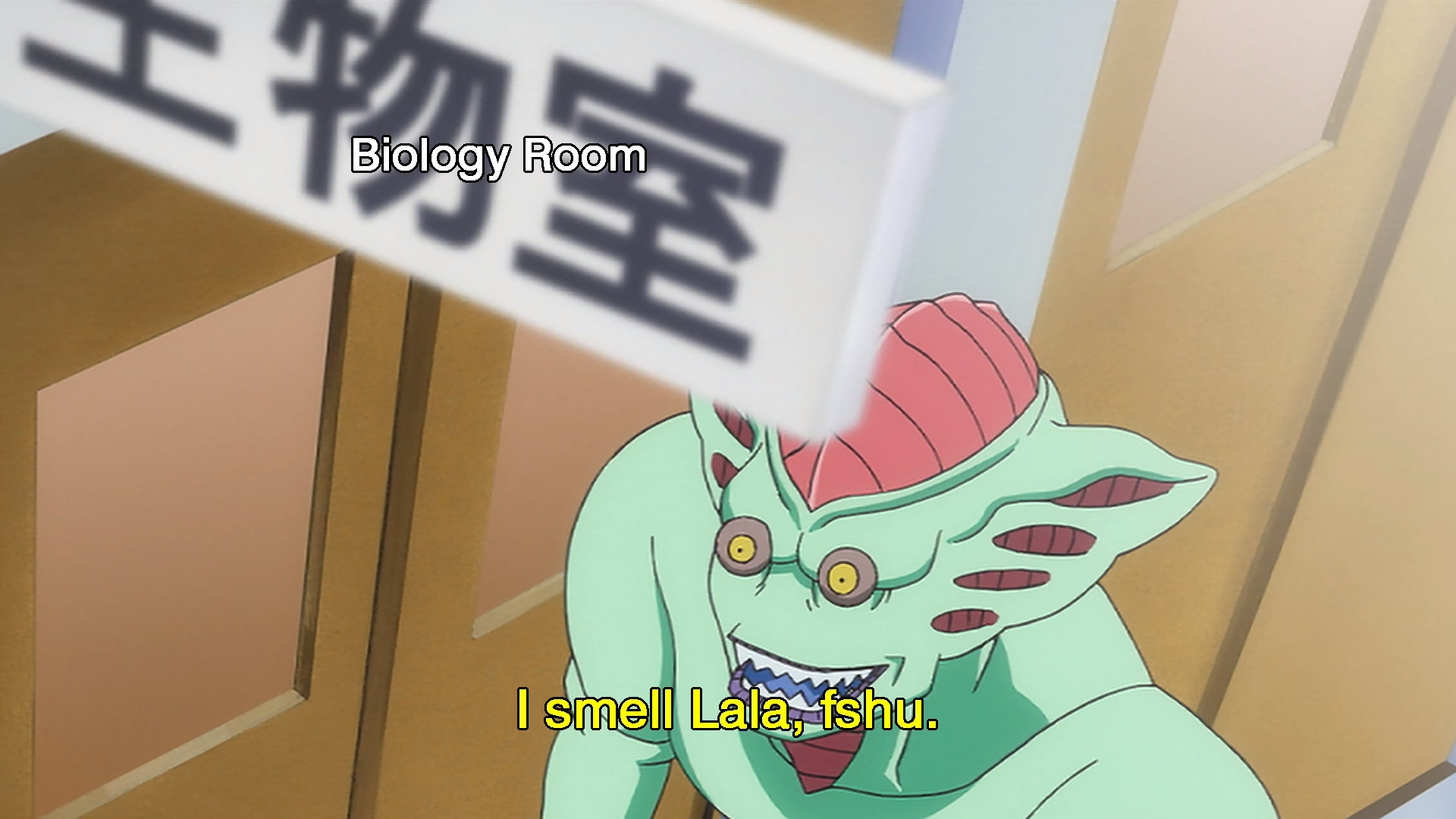 Side note, they’re dissecting frogs in biology class, we never did that in Australia (at least not in my school) and I’m glad we didn’t–it’s gross. Did you ever have to do that in your school? Well, I went to med school so I dissected cadavers and a lot of other critters but never anything alive. This said I’m not sure what the standards are for Canadian high schools.

What’d you think of Lala’s comedic ~bit~ this episode, with her trying to “dissect” Rito because she wanted to get to know him better. It was cute for a minute but I think the joke ran out of steam fast. I thought it was kind of stupid. As you said, it worked for a second but the execution was off. I’m not sure if it was on purpose or just because of the pink hair but it did give me Yuno vibes. If that was the joke it was decently tongue in cheek but it went on way too long and I really wished they would stop bringing it back. 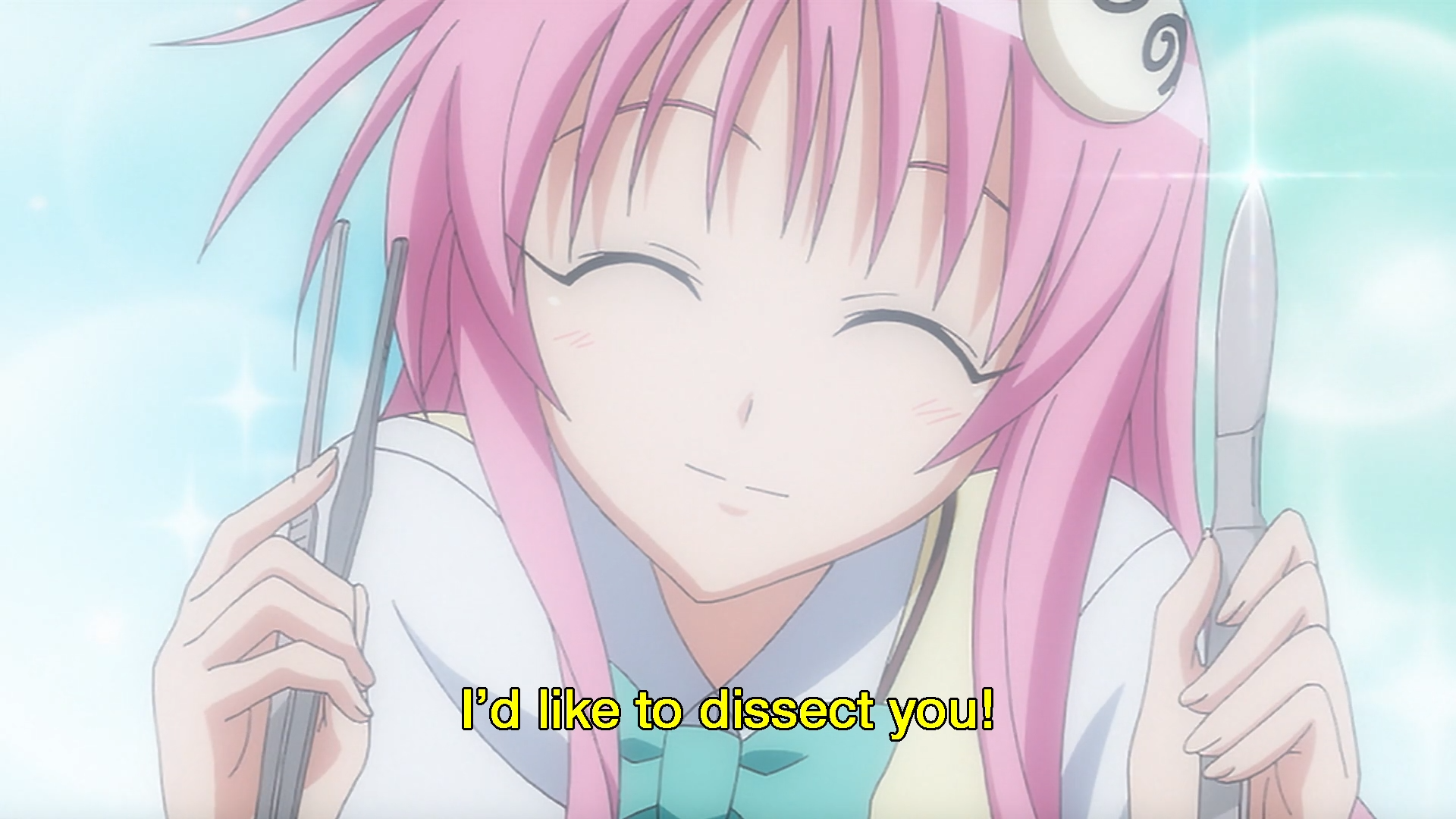 The alien shape-shifts into the form of their principal and takes Haruna captive in the P.E. storage shed and this is about where I was done with the episode. Now, I’m all for tentacle scenes, we only just had one in Episode 4 after all–but my one stipulation is that they’re comedically over-the-top in nature. This one wasn’t, it was predatory–which I’ll cut the show some slack–it’s not like they were painting this as fun. The music, the lighting, the entire situation was shown to be a sinister, very bad thing that was happening to Haruna. That said, it still didn’t make for an enjoyable time and like a lot of things in this episode dragged out too long. I’m interested in what you thought about this Irina considering your aversion to the tone and situations of certain scenes in the previous episode? We had one in ep 5 too. I liked that they acknowledged that the situation would be horrible for the girl involved and not something to just laugh at. I can’t say I enjoyed it but I prefer this to how the last episode ended for sure. If I had any complaint it’s mostly that it clashed with the tone of the series so far. The rest, I’m going to save for the fanservice section.

Sidenote, the blonde girl wasn’t in school this week. Is she in the hospital or police station? I know you’re obsessed with the idea that something terrible happened to her but she’s in the grade above Rito, Haruna and Lala and we didn’t see her class that’s why Saki wasn’t in the episode.

So Lala tracks Rito (who has since found Haruna and the aforementioned situation) and discovers them all, turns out she’s very familiar with Ghi Blee as he’s proposed to her before and she’s rejected him plenty of times too. And I like how assertive Lala is here, she’s not about to take this dude’s shit but Rito being Rito he wants to save Haruna himself and decides to fight Ghi Blee, a creepy alien dude who’s now grown to being twice the size of him. Assertive? She said he was ugly so she didn’t want to marry him. I guess that counts. Lala seemed super unfazed by the situation, I wonder if it’s happened before? Since Lala is very ok with nudity and tentacles she may not have realized how traumatizing the situation was for the humans.

As Rito readies a punch Ghi Blee shrieks and cowers, turns out he’s a cowardly wimp and his true form is diminutive weakling. Also turns out Ghi Blee has wives and children from multiple alien races who all show up for some reason. This reminded me of that episode of ‘Futurama’ where Leela meets that one-eyed alien who claims to be the last of their species but turns out to be a shape-shifter with multiple partners too. Except a lot worse than that. 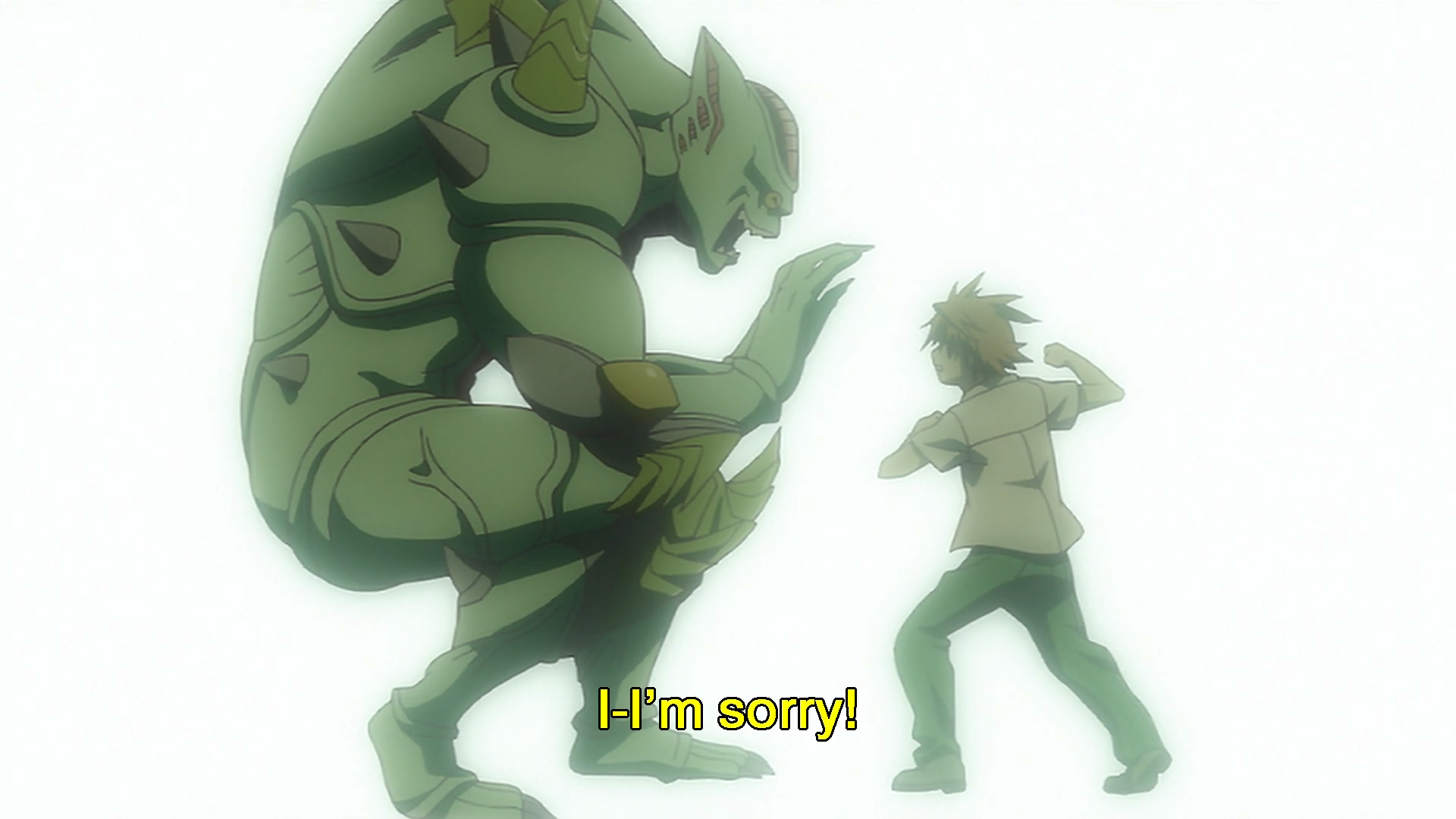 I don’t like that Ghi Blee got off so easy for what he did to Haruna, thankfully for Haruna she was unconscious throughout the entire thing so she doesn’t have to know what happened to her but it still happened to her. Why was she unconscious by the way? I thought the cowardly alien bit was funny. Well to me it was the funniest bit in the episode at least. And he did get punished which is better than nothing. 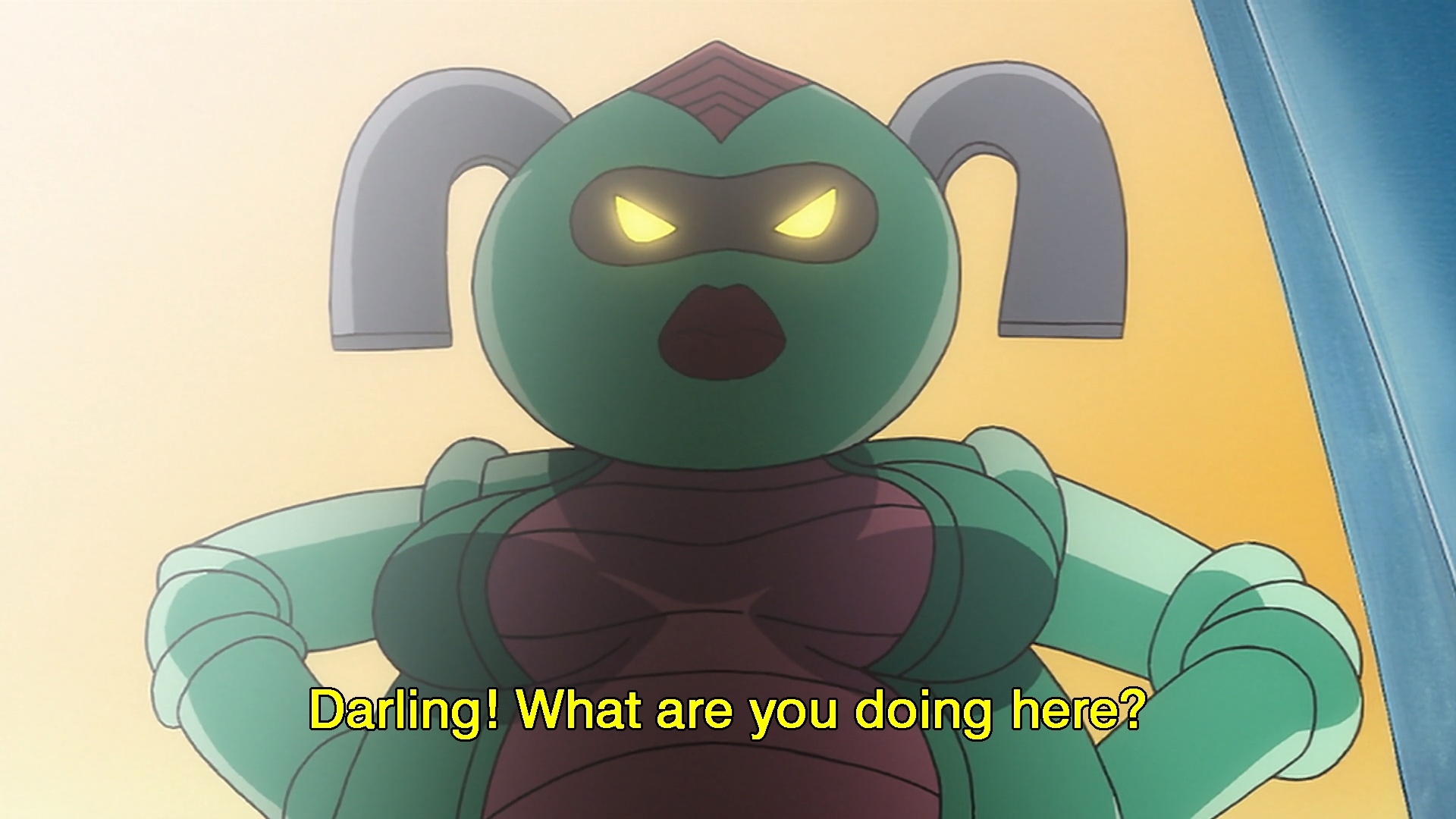 My favourite moment (aside from Rito’s friend Saruyama volunteering to be “dissected” by Lala) was the nice moment in the infirmary where Lala hugs Haruna and is glad she’s alright. I love that there’s zero rivalry between these two girls and they can be friends despite ostensibly being love-rivals. What was your favourite moment? The OP! It was great! I’m not being a smart ass, it’s a fun OP. Possibly the Zatsin scene, back to that in a minute. I’m glad it’s finally grown on you!

(feel free to ask me some questions here, but I have a feeling there’s not much to talk about in this episode on the subject) I’m hoping Matt leaves his comment in, because I disagree. There was quite a bit of fanservice this episode and I think it would be interesting to talk about it as it’s different from the fanservice we’ve seen so far.

First, although you’re right that the Haruna hostage situation was not presented as fun for her, it was still clearly fanservice. The camera lovingly zoomed in and stayed on cleavage or tentacles going up her skirt. For some reason, she was out so you didn’t have to deal with the uncomfortable reality of Haruna crying or begging for her life. Put some sexy music behind that and it could have been a love scene. For a second, even Rito blushes and reacts as if the situation is alluring instead of being completely disgusted. He even leaves at the end because before Haruna comes to because the situation is embarrassing (for both of them). It’s respectful on one level but he is still more aware of her body than her safety or health at that moment. I mean sure, but he is still a 15 year old boy. They are idiot hormone machines–I should know I was one.

How do you take in a scene like that? How do you reconcile the fact that it is created to both repulse and attract the viewer? Like anything in anime this kind of fan service (and you’re right it is 100% fan service) has its audience—you only have to look on pixiv to find thousands of images like this or worse. There’s people who find public humiliation stuff sexy which is what you could call the final scene in Episode 5. I think an Ecchi series of this size and caliber is going to try its hand at every type and genre of fan service—some of it will be in line with mainstream tastes (and I’m using that in looser terms) and some of it will push boundaries. But what did you think? I mean if you’re asking my tastes in fan-service this type of scene is not for me personally, it ranks very low on my preferred types of anime fan service but I’d be lying if I didn’t say they still draw Haruna’s body in a sexy and alluring way.

With most of the fanservice super uncomfortable this episode, weren’t you happy we at least got some good old bath time antics? We actually got Zatsin fanservice and you pretend like it didn’t happen? For shame! Let’s talk about it in great detail, go! I knew you’d bring it up, that’s why I didn’t have to! I mean what’s there to say, Zastin is a tall, buff good-looking dude and he’s in a bath… see Irina I’m not good at reviewing man-service. I think it’s great. You did a great job in Dakaichi as well. 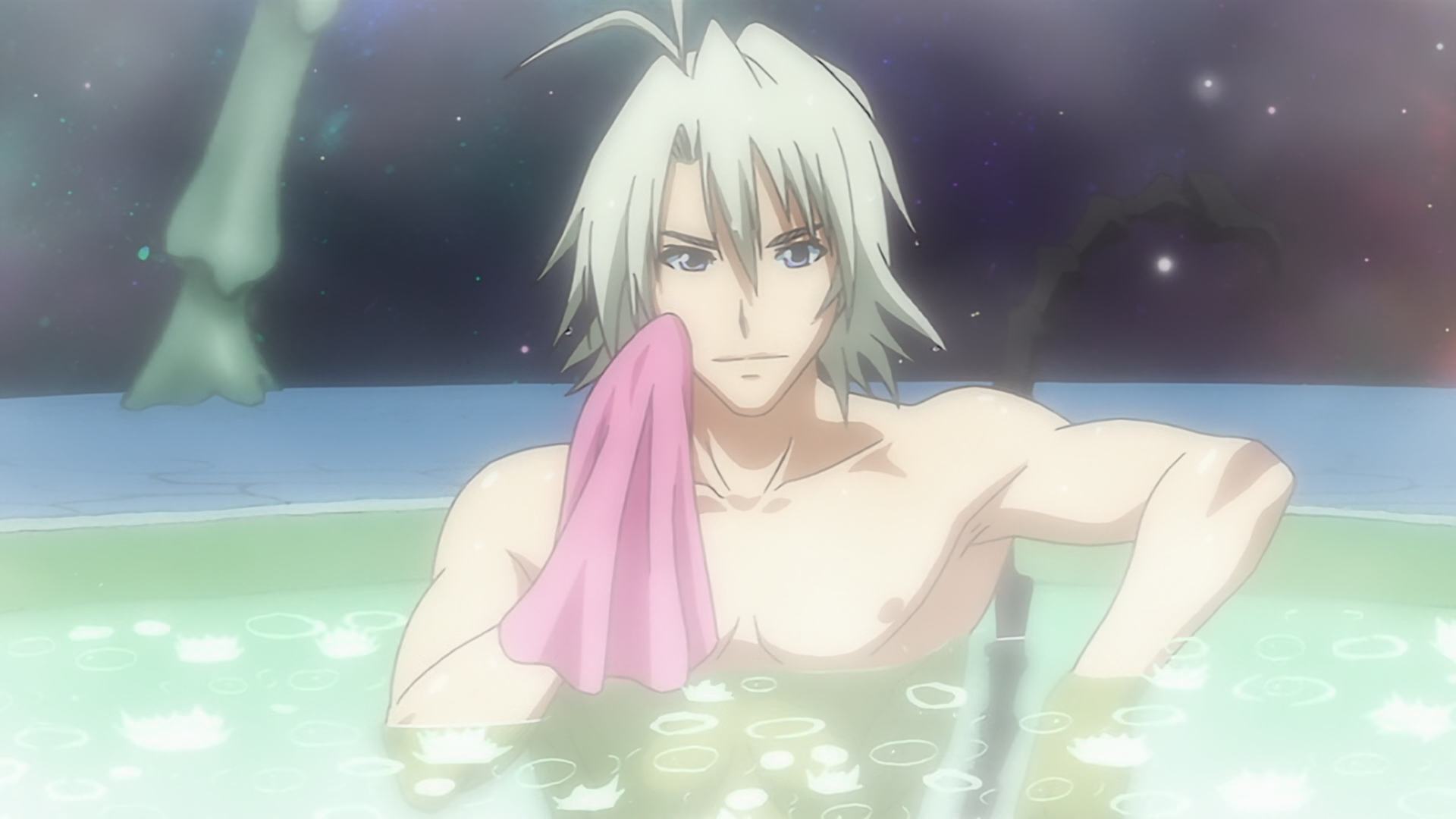 This episode felt like filler, a complaint a lot of die-hard fans of the original manga had about this entire first season in general (FYI Irina, the manga version is very different in nearly every episode of this season, so much so that there were enough fan complaints that every subsequent season adheres strictly to the source material). While there were a couple of brief laugh-out-loud moments, some fun stuff in the classroom and a few flashes of interesting character development the majority of scenes with Ghi Blee were pointless and ugly. What did you think overall? 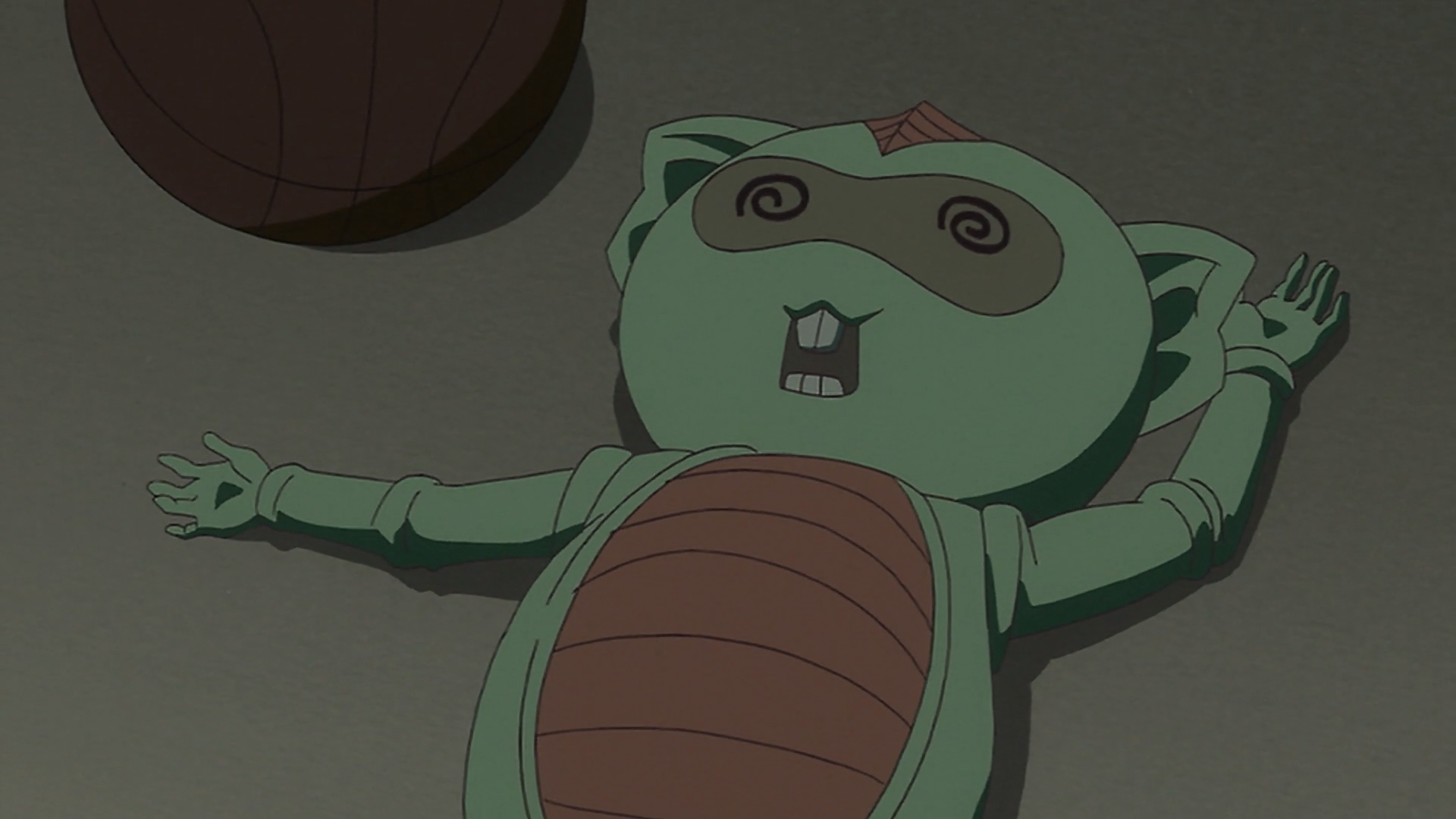 I’m so relieved to hear that. I was watching it and thinking that you would tell me this was the bestest episode and I got a little depressed. I didn’t like it. I found it less disturbing than the last one but honestly, a lot of it was just kind of boring. The alien dude wasn’t really interesting and the dissection and masochist jokes were super repetitive so it didn’t live up to the episodes so far at all. The ‘To Love-Ru’ series may be my favourite of all time but this first season isn’t without its fair share of mediocre experiences, it’s not until ‘To Love-Ru Darkness Season 1 and 2’ that the show becomes pretty much perfect (in my opinion). I give this episode a score of 71/100, and the fan service a score of 50/100. 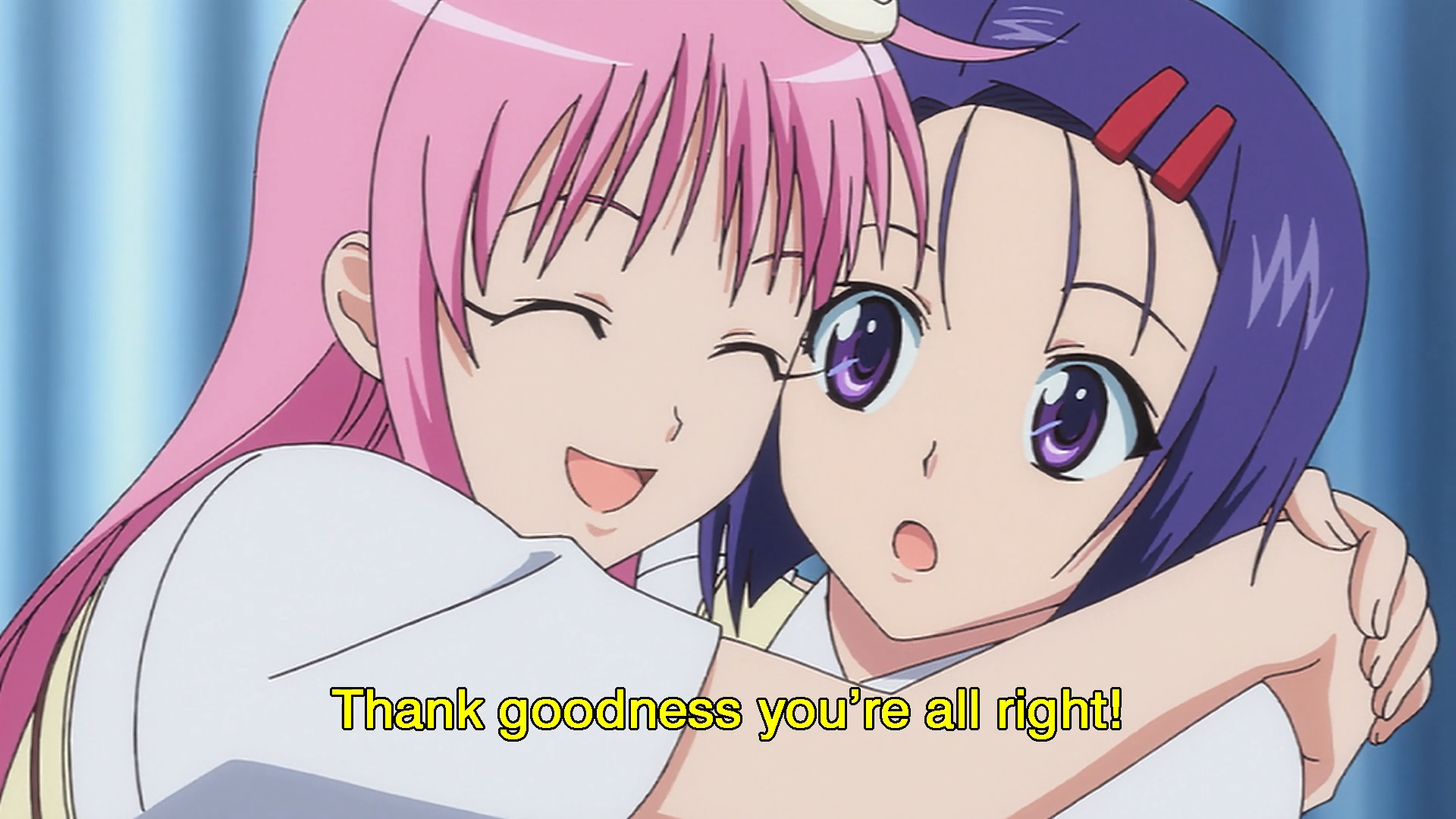